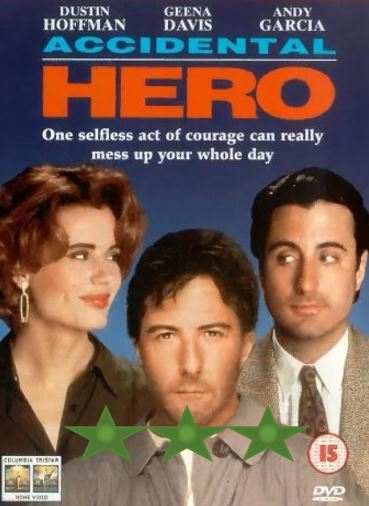 Plot: A not-so-nice man rescues passengers from a crashed airliner, only to see someone else take credit.

Tagline – We’re all heroes if you catch us at the right moment. Even Bernie LaPlante.

Story: Accidental Hero starts as we meet Bernie LaPlante (Hoffman) who is facing jail time for his streetwise action, he is trying to talk himself out of jail time, without much success. We also meet reporter Gale (Davis) who has just received an award for her work even if her boss isn’t given her the chances she has earnt.

When the plane carrying Gale crash lands, Bernie happens to be next to accident, he ends up saving everybody on board, before vanishing into the night. When Gale wants to make the story out of the event, a fellow homeless man John Bubber (Garcia) takes credit, who wants to use his new-found fame to help the homeless, while Bernie is left in jail watching the events unfold.

Characters – Bernie LaPlante is a homeless man that has blown his successful life out the water, he lost his wife, most of his time with his son and is facing jail, he knows how to survive and push the limits to make sure he survives on the street, with his car being his home. He ends up doing an act of greatness, saving the passengers on a plane, but not wanting the praise for this, until a monetary reward comes up, he must figure out how to prove it was him. Gale is a reporter on the rise in the business, she is receiving an award, while still fighting her time on the big screen, she makes a story out of the plane crash, which sees her take a homeless man to celebrity status. John Bubber is a homeless man that decides to come forward and claim the reward for being the hero, he soon becomes the talk of the town that would inspire many into doing the right thing.

Performances – Dustin Hoffman is the right man for the job because he fits the unlikely hero that has been through the struggles in life. Geena Davis is fun in the role that sums up the struggle women would have in the professional field. Andy Garcia goes through the biggest change which sees him doing everything to live with the new fame.

Story – The story follows a reporter who wants to make the hero of a plane crash rescue known to the people they saved, only for the real person behind it all, not getting the game after a fake takes the limelight. This does pain the picture of faster acting celebrities coming from such simple ideas of rescuing somebody, people struggling with new fame and how people are quick to just judge anybody that might be helping others out. Strangely enough this is one of the stories that could really become more appealing in the social media heavy world we now live in and would be an interesting one to see reach new level.

Comedy/Romance – The comedy in this film doesn’t come off, it never feels like a film you could have a giggle about anything happening, the romance is strange because it just doesn’t give us a believable one either.

Settings – The settings show us just how the big city can capture a story which would make an unknown a celebrity over night.

Scene of the Movie – The balcony.

That Moment That Annoyed Me – The lack of comedy in the comedy film.

Final Thoughts – This is a lacklustre romantic comedy that just doesn’t hit the marks it could and actually feels like it could be one film that makes a bigger impact now.

Overall: Stuck between too many genres.

Plot: In a Russian coastal town, Kolya is forced to fight the corrupt mayor when he is told that his house will be demolished. He recruits a lawyer friend to help, but the man’s arrival brings further misfortune for Kolya and his family.

Story: Leviathan starts as hard working engineer Nikolay (Serebryakov) is facing the loss of his home and livelihood at the hands of the corrupt mayor, calling on lawyer Dmitriy (Vdovichenkov) to fight the law, he takes his first steps down the road to get what is his.

As the fight between the two parties continues, Dmitriy brings new information to the table, while Nikolay learns that his family isn’t as perfect as he once thought.

Characters – Nikolay is the hard-working man, he has earnt everything he has, his home, his workshop and his family, but now he must go against the town to keep what is his after they try to take it from him. Lilya is Nikolay’s wife, she is backing the decision against the town even if she has the one with a secret which could tear the family apart. Dmitriy is the big city lawyer that comes to take Nikolay’s case, he knows how to stay on step ahead of the mayor and will push back when needed.

Performances – The performances from the whole cast are great through the film, they commit to their roles with many of the drinking scenes including real drinking and reaction.

Story – The story here stars by focusing on the idea of a singular town’s person fighting against the mayor to keep his home, but soon turns into a personal drama about his own battle to keep his family together through the struggles. The story does give us a good sense of community with how everything unfolds which makes us believe we are watching where the characters are going through life. The pacing of the story might however put people off as it moves at a slow pace.

Crime – The crime side of the film deals with how the town want to just take a man’s home without him being able to fight them off, this does help show the descent the family will be going in.

Settings – The film is set in a solo town which shows how united the characters can be during everything that happens.

Scene of the Movie – The moment Roma gets along is beautiful shot.

That Moment That Annoyed Me – The pacing isn’t for me.

Final Thoughts – This is a good drama that does have a few pacing issues, it deals with very real issues and leaves us feeling the way you are meant to by the end of the film.