Plot: This movie is about Jackie Robinson and his journey to becoming a Brooklyn Dodger and his life during that time.

Story: 42 starts with the history of baseball and how after World War II there was 400 players in the MLB and they were all white, the black players had their own league until 1947 when the number dropped to 399. Branch Rickey (Ford) wants to bring the first black man to the major leagues for the Brooklyn Dodgers against everything the world at the time suggests, that player is Jackie Robinson (Boseman).

Jackie must start in a feeder team and must put aside the segregation issues that is still going through America, Jackie and his wife Rachel (Beharie) must show they have the thick skin to deal with the abuse from the crowd, other players attitude and prejudices going through America to become a trailblazer for the African American Baseball players.

Characters – Looking at the characters we are looking at real people this time and one Jackie Robinson who would stand up for what he believed in while making his name on the baseball field, he becomes the trailblazer given the chance to become the first black major league baseball player defining all the segregation problems going through America. Branch Rickey was a bible loving owner of the Brooklyn Dodgers who wants to make a difference in the game giving Jackie a chance to change the game so he could be owning a victorious team. Rachel is Jackie’s wife that stands by him through the discrimination he experiences.

Performance – Chadwick Boseman is fantastic in this role showing that he was going to be a huge name in the future. Harrison Ford gives us one of his best performances of his elder career that is outside his known franchises, with Nicole Beharie doing well with the character she has to work with.

Story – The story of Jackie Robinson is the stuff of legends on America, the trailblazer for African America baseball players fight on and off the field against the discrimination he faces to become the star of the season. We get to see how the country of America was so far behind the times with their equality that is still happening without being as serious as it once was. This is an important history lesson if you are a fan of baseball, sport and history in general.

Biography/Sports – Jackie Robinson is an icon of the sport of baseball, this shows how he fought off everything to become that icon.

Settings – Each setting shows us the different worlds that Jackie must walk into with different opinions on the difference in race. 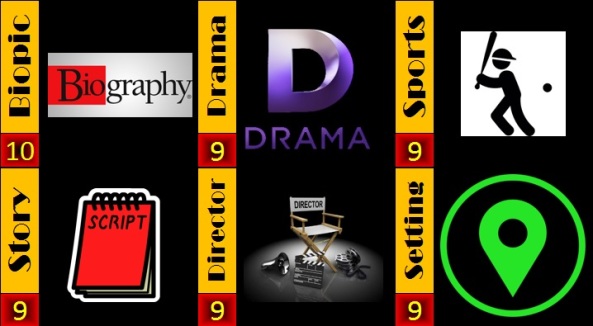 Scene of the Movie – The team standing up for Robinson against ben Chapman.

That Moment That Annoyed Me – I don’t understand baseball.

Final Thoughts – When you look at sports biopics you will always see an icon born and this shows just how Jackie Robinson became the legend the game knows and is a must watch.

Overall: Must watch for sports fans.