Plot: The true story of a newly appointed African-American coach and his high school team on their first season as a racially integrated unit.

Story: Remember the Titans starts as a typically white American Football team gets assigned a new African American head coach Herman Boone (Washington) even though he is replacing highly successful coach Bill Yoast (Patton). The two have different approaches which involves bringing both the races together for a mixed Football team.

Julius Campbell (Harris) represents the black captain, while Gerry Bertier (Hurst) represents the white captain, the two must learn to put their racial differences behind them and accept themselves as equal and take the league by storm.

Thoughts on Remember the Titans

Characters – Coach Herman Boone has been breaking boundaries in the racial divided in American Football high school coaching career, not he comes to a white school to continue to break his boundaries bringing the two different races together to try to become champions. Coach Bill Yoast was the coach that ran the team who has championships behind him, but gets drop to assistant coach under Boone, he continues to show his skills running the defence side of the team and learns along with Boone to improve their coaching. Julius Campbell is the black captain that works with the white captain to get rid of the divide between the races to win his own championship. We have plenty of different characters in the team that have their own opinions on the racial divide between the players.

Performance – Denzel Washington in the leading role is fantastic as the coach that inspires a team to put their differences aside to try and win a championship. Will Patton is great too standing toe to toe with Washington on the side lines with the powerful scenes when needed. The rest of the young cast are great too because we have a lot of stars who went onto have huge career too.

Story – The story is based on the true story of the African American coach that overcame a racial divide in a sport to turn a team that clashed over their skin colour to become a unit and a force in the league. This story shows how the younger generation who were raised to believe one thing can be taught the right thing when it comes to treating other people, by using sports to put those differences behind them.

Biopic/Sports – The biopic shows the strength this team and coaches had to become fighters when everyone else wanted them to fail. The sports side gives us good moments of American Football, but nothing we haven’t seen before.

Settings – The settings show us how America was still riddled with racial difficulties during the 70s and different states act differently towards everyone. 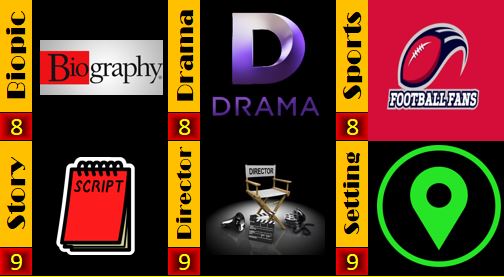 Scene of the Movie – The night they played the titans.

That Moment That Annoyed Me – The whole girlfriend of Gerry seems tacked on.

Final Thoughts – This is another one of the brilliant inspirational story that shows sports can bring people together through the hard times.