Dead in a Week: Or Your Money Back is available from the 6th May for Digital Download.

Plot: After his ninth unsuccessful attempt on his own life, a young man outsources his suicide to an ageing assassin. “If you’re serious about ending it, you need professional help”

Tagline – If you’re serious about ending it, you might need professional help.

Story: Dead in a Week: Or Your Money Back starts as William (Barnard) a young man struggling with depression in London is ready to commit suicide, he latest attempt sees his bad luck continue as he survives, William ends up losing his job because of his mindset, he has mounting bills and has failed in his suicide attempts nine times now.

William turns to an aging assassin Leslie (Wilkinson) to help him complete his suicide attempt as he goes around helping depressed people on the verge of suicide, in case they can’t go through with it, offering them a way out. With the contract out, Leslie has one week to kill William or he will refund the deal, only for William’s life to take an unexpected twist during this week.

Thoughts on Dead in a Week: Or Your Money Back

Characters – William is a depressed writer living in London, working as a lifeguard to make money, he has tried to kill himself nine times, which all have been unsuccessful, on his latest attempt he ends up meeting an assassin that offers to get the job done. William has been struggling with the idea of fitting in, finding his purpose in life, thinking his place in the world isn’t worth it, showing how loneliness can lead people down a dark path. This is a character that is relatable because people will be struggling with the difficulties of life. Leslie is an aging assassin that has turned to helping suicidal people as he isn’t the assassin he once was compared to the younger ones in his company. He is desperate to get the job done before retiring, but soon finds himself disappointing his boss and co-workers. Harvey runs the assassin’s group that wants to see Leslie out of the business, he is like a boss pushing retirement on a member of staff. Ellie brings new hope to William’s life, she reads his book and wants to make something out of it, which only draws on the situation that William is in to a new complicated level.

Performances – Aneurin Barnard is brilliant in the leading role, he needs to make his character look and feel depressed through the film. Tom Wilkinson is fantastic in his role that shows us just how difficult it will be to reach retirement age. Freya Mavor is great to watch too bring the positive side of the film. Christopher Eccleston does a strong job with his smaller role which does work letting him show off his skills.

Story – The story follows a depressed young man that has been failing to commit suicide and decides to hire an assassin to get the job done for him, we follow the week as we get to see how an unexpected twist in the young man’s life will change the way he looks at the world. This story does step into the conversation of suicide and how people can be living with it and finding it hard to cope, it focuses more on the idea of not feeling like they are part of the world over, something bad happening to him to make them feel this mind set. The story does also deal with the retirement older people from a career they have spent their lives working in. the story does flow smoothly and builds up to show us that whichever difficult moment in life you might be facing, there can be a light at the end of the tunnel.

Action/Comedy – The action involved in this film in saved for the moments it is need, think ‘In Bruges’ levels of action being achieved. The comedy is very dark in this film, mostly coming from the type of material that jokes are being made through the film.

Settings – The films uses the settings to show us the different lives the characters living in, without being anywhere iconic. 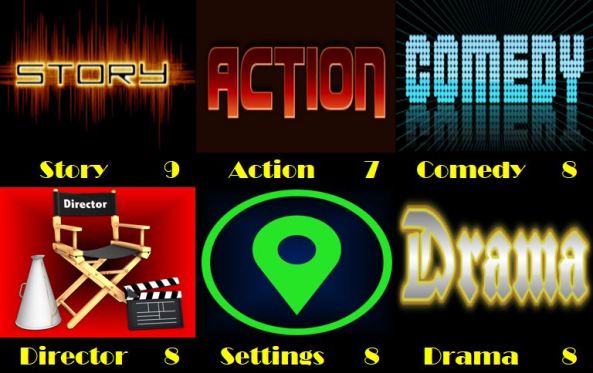 Scene of the Movie – The showdown.

That Moment That Annoyed Me – It might seem overly casual on the suicide jokes in places.

Final Thoughts – This is a dark comedy that is filled with plenty of dark moments that does deal with the subject matter strongly for the most part.