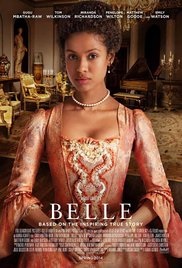 Plot: The mixed race daughter of a Royal Navy Admiral is raised by her aristocratic great-uncle in 18th century England.

Story: Belle starts in 1769 when Captain Sir John Lindsay (Goode) father’s a child with a slave girl who has died. He begs his Uncle Lord Mansfield (Wilkinson) and Lady Mansfield (Watson) to care for Dido Elizabeth Belle. Facing the difficult decision Lord Mansfield accepts Belle into the household as a new friend for their other niece Elizabeth, but for the social order they must wait and see.

Belle (Mbatha-Raw) and Elizabeth (Gadon) grown up to their 20’s as Belle learns of her father’s death and potential suitors for Elizabeth with Dido staying away from visitors because of her skin colour. When Lord Mansfield agrees to take vicar’s son John Davinier (Reid) under his wing to defend the rights of the slaves after a tragic event led to the death of them on board a transport ship by the captain.

With the case running in the background Belle uses this to work with Davinier to bring down the slavery industry running through Britain while dealing with the society marriages she has found herself involved with.

Characters/Performance – Belle is the black woman in higher society England, only she isn’t accepted in all the ways the white high society people are. She lives in the rich homes but not welcome to the dinners but doesn’t understand the difference until she comes of age, she is a strong minded woman whose short memories of her father motivate her into wanting to make a change to rid England of slavery. Lord Mansfield is drawn into how society is meant to be but also wants the best for his adopted daughter. John Davinier is the idealistic young man who is in search for the change in slavery who sees how Belle also wants to change.

Performance wise I do feel Mbatha-Raw gives her best performance of her career to date here with Tom Wilkinson always showing us his acting class. Sam Reid is also great throughout with the rest of the cast all performing their roles just how you need them to be.

Story – The story is showing an important part of history as we see how England had it’s first case that could bring down slavery in the country. The story unfolds showing how difficult it was for Belle in this time because of her blood line, skin colour and social standing. I think this is an unknow and important part of history that should be known.

Biography/Romance – Looking into this woman’s history was fascinating because we get to see how her choice in love help change a nation look at slavery.

Settings – Each setting looks perfect for time the film is set showing how the upper class looked at the life they had.

Final Thoughts – This is a film I wasn’t sure about but found myself enjoying from start to finish.

Overall: This is a good film for all history buffs to enjoy.