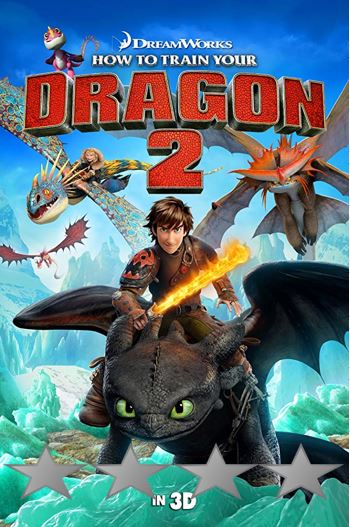 Plot: When Hiccup and Toothless discover an ice cave that is home to hundreds of new wild dragons and the mysterious Dragon Rider, the two friends find themselves at the center of a battle to protect the peace.

Story: How to Train Your Dragon 2 starts a couple of years after the events of the last film, the Vikings and dragons now live side by side, with Hiccup and Toothless exploring the open water searching for new land and opportunity. With Stoick is wanting Hiccup to take over a chief, Hiccup isn’t ready for this responsibility.

When Hiccup goes exploring he learns of a new threat, Drago a man that has a dragon army, wanting to create peace, Hiccup meets another dragon rider, his long-lost mother Valka.

Thoughts on How to Train Your Dragon 2

Characters – Hiccup is now exploring the surrounding world with Toothless, he goes far and wide, his discovery this time around will bring a new threat to his homeland and the dragons, while giving him a shocking discovery about his past. Hiccup is on the verge of become chief a responsibility he isn’t ready for too. Stoick is still the chief, he keeps the community together, though he is reaching the age of retirement, trying to prepare Hiccup to take over, he will be just as shocked as Hiccup when it comes to dealing with an old face returning to his life. Valka is the mysterious dragon rider, she has a vast friendly army that is only out to protect the dragon community, she is Hiccup’s mother who was long thought to be dead, she had always thought the same as Hiccup. Drago is the evil tyrant who has a dragon army, he wants complete control of the dragons killing anyone who doesn’t follow him.

Story – The story here puts our character Hiccup in a new dilemma, one where he must face a future responsibility while trying to learn more about the world, using the dragons to see the world. as this is a sequel we get a surprise appearance from a character we thought was dead, the battles will become bigger much like how the world is becoming bigger for the Vikings. We get to see even more wonderful dragon designs. The more dragons we discover, the bigger the threat can become to the people of the world, it shows how people will need to fight for their people in an attempt to save their people.

Action/Adventure/Comedy/Family – The action in this film is bigger than last time, the large scale dragon battle is breath taking to watch. The adventure in the film takes Hiccup to bigger and further locations than the original showing us how Hiccup is learning about the world. the comedy does take a step back this time, which is fine because we don’t need it with a more serious storyline.

Settings – The film creates more beautiful locations that could only come from the world filled with dragons, each location has a unique look too.

Animation – The animation as always is wonderful to see and will be remembered by the end of the film, the scale of the battles is special to see.

Scene of the Movie – Alpha versus Alpha battle.

That Moment That Annoyed Me – Ruffnet’s obsession with Eret.

Final Thoughts – This is a brilliant sequel that is better than the original, it keeps us full engrossed in the next adventure of Hiccup.