Plot: When his only friend dies, a man born with dwarfism moves to rural New Jersey to live a life of solitude, only to meet a chatty hot dog vendor and a woman dealing with her own personal loss.

Story: The Station Agent starts when Finbar McBride (Dinklage) must relocate to rural new Jersey after his friend passes away, he wants a quiet solitude life, as he moves into an abandoned train station. He just so happens to be opposite a chatty hotdog vendor Joe (Cannavale). Finbar continues to meet the locals including the clumsy Olivia (Clarkson) and Emily (Williams).

Finbar, Joe and Olivia end up striking up an unlikely friendship as Fin learns to let people in to his life, Joe learns to open up more about life and Olivia reveals her own tragic story.

Thoughts on The Station Agent

Characters – Finbar has always worked and lived in the same location until his friend dies, Fin is forced to move out of the city where he wants to continue his life of isolation, only the overly welcoming locals want to be his friend. Finbar starts to learn about other people’s problems as loneliness isn’t the best thing in his life. Olivia nearly runs Finbar over, she is dealing with her own problems that she is covering up with a bubbly personality, she becomes one of the people that Fin wants to help. Joe runs a hot dog stand opposite Fin’s new home, he likes to chat and wants to become Fin’s friend, he has his own problems that he doesn’t want to talk to anybody else about.

Performances – Peter Dinklage showed the whole world just how talented he is as an actor in this leading role, Patricia Clarkson is also wonderful in her role as we feel the pain her character is going through. Bobby Cannavale completes the main cast with an enjoyable performance

Story – The story here follows one man that must relocate after his friend dies, he wants to be left in isolation only for the locals to just want to welcome him to the neighbourhood, even if they have their own problems. This is a story that teaches people that need to have a friend to get through your problems, even if the friend comes from the most unlikely location in your everyday life. It shows how people can live a life in pain without you knowing until you are willing to listen to them. It can show how life isn’t going to be easy and it can take you down dark paths and you will need people to help you.

Comedy – The film fits the comedy drama wonderfully, handling the serious nature of the events of the film, while getting the laughs when needed.

Settings – The film is set in a small location of a town outside of New Jersey, the people are friendly and have problems, they want to stay strong in the eyes of the other members of the community. 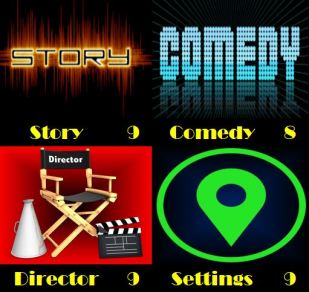 Scene of the Movie – The final shot.

That Moment That Annoyed Me – We do have too many dwarf jokes, which feel like they haven’t aged well.

Final Thoughts – This is a charming comedy drama that shows the real struggles in life with friendship coming from the unlikely places.