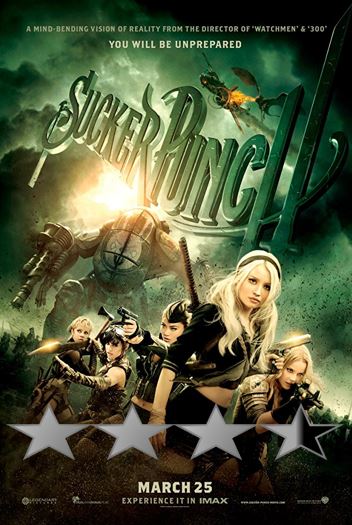 Plot: A young girl is institutionalized by her abusive stepfather, retreating to an alternative reality as a coping strategy, envisioning a plan to help her escape.

Tagline – You Will Be Unprepared.

Story: Sucker Punch Starts when Babydoll (Browning) is se to a mental institute by her evil step-father, looking to cope with this new world, she creates an alternative reality where the other patients Sweet Pea (Cornish), Rocket (Malone), Blondie (Hudgens) and Amber (Chung) entertain clients for Blue Jones (Isaac) the orderly who in this world is a gangster.

Babydoll has a plan to escape which involved winning over the girls, most support him, while Sweet Pea isn’t so happy to go along with the plan, with each performance putting the girls in a life or death situation outside of the current reality.

Characters – Babydoll is thrown into a mental home after trying to defend her younger sister from their abusive stepfather, here she knows she has five days before it is lights out, which means she must plan her escape, which sees her create alternative reality where she can escape the hands of the people who will end her life. Sweet Pea is the eldest the girls in the home, she is most opposed to going through with the escape plan, believe it will get the rest of the girls in trouble. Rocket is the first of the girls to let Babydoll in after being rescued by her, she guides her around the home teaching her just what they need to know to survive. Blondie and Amber some off as the two naïve of the girls as they will go along with any idea which would make their lives easier. Dr Gorski looks after the girls preparing them for their performances. Blue Jones is the one that runs the club, an orderly in the home that holds the key to the only exit.

Performances – Emily Browning in the leading role fits the part perfectly, we needed her character to look the youngest of the group. Abbie Cornish fits the oldest of the girl’s role well too because she see her vulnerable side through the film, while trying to be the strongest. Jena Malone plays the middle ground between the girls well as we see just how conflicted her character becomes through the film. When we get into the supporting cast, we do know that we performances that fit the film without looking out of place in any point in the film. 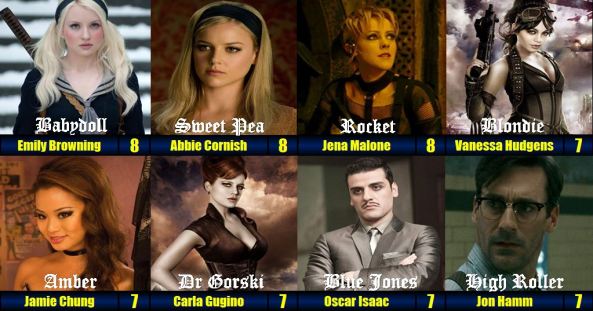 Story – The story can be cut down to a simple escape plan movie, that would be the simplest way to describe the story, only this isn’t a simple movie. It creates worlds, within worlds to cope with an impending outcome for Babygirl. The idea that we jump into other realities does help the film feel a lot more enjoyable because the wildly imaginative ideas only improve the story, even if it could have borrowed from many subgenres. While this does have a comic book feel and you could easily see more chapters being added to make more adventures, it does have to go down as original in the story front, something that shouldn’t ever be criticised.

Action/Fantasy – The action is massive set pieces each one from a different eras from a samurai to war, they all work and feel unique to this film, which is filled with fantasy ideas of just what the characters use to create the world they can fight through.

Settings – The film uses the settings to show us just where the girl’s minds will go through the performances, each one makes the mission to escape feel like we are fighting for something.

Special Effects – The effects in the film are fantastic, they show us just how you can create something this visually stunning no matter how big it could be.

Scene of the Movie – Dragon fight.

That Moment That Annoyed Me – Blondie and Amber are too similar.

Final Thoughts – This is a truly ambitious movie, it shows us just how you can make an original movie which will completely go against anything you believed you would be seeing.

Overall: Brave, ambitious, wildly over the top, what more could you want?