Plot: While on probation, a man begins to re-evaluate his relationship with his volatile best friend.

Tagline – Change The Way You See.

Story: Blindspotting starts ass Collin (Diggs) is released from prison, going on his one-year probation, everything has gone smoothly and with 3 days to go, he has big plans, with his best friend Miles (Casal), on his trip home to make curfew, Collin witnesses Officer Molina (Embry) gun down an unarmed black man.

Collin is torn with what to do about the shooting knowing his background isn’t going to help his case, while Miles keeps getting himself into trouble with his wheeling and dealing ways, his future I put at risk with the final two days of his probation.

Characters – Collin has just served a 2-month sentence now on a one-year probation, which has gone well for 362 days, he has a job and has kept his head down avoiding any criminal activity or clashes with the law. He has a plan for his time once his probation is over, which get put up in the air when he sees a police shooting in his neighbourhood, knowing that could bring down a dirty cop, he is torn between coming forward or keeping his head down. Collin represents the black man that has committed a small crime, doing his time and being written off by society even if he wants to turn his life around after learning from his mistake. Miles is the best friend of Collin’s that could easily still get him in trouble for everything he does, he represents the life that a white man doesn’t get treated the same as a black man for the same crimes, in the same neighbourhood. Val is the ex-girlfriend of Collin’s that is his boss, she didn’t support him when he was in prison even though she still sees good in hi, she is waiting for him to make the change. Ashely is Miles’s girlfriend that has put raising their child first, until he does do something wrong putting their child before their relationship.

Performances – Daveed Diggs is truly brilliant in the leading role, we see how he is making his character be so conflicted with what he witnesses, he has the fear of being put into a bracket of a criminal, with the sequence in the basement being one of the stand out scenes and performances of the year. Rafael Casal is equally as top level here, where he shows and reflects the life that Collin could have still been living after never taking punishment for action. When it comes to the supporting cast everybody is great letting the two leads shine on the levels required.

Story – The story here follows an ex-con needing to survive his probation, which becomes more difficult after he witnesses a police shooting and his best friend keeps getting him into trouble. The idea of following somebody going clean after prison is one that we have seen many times, around the troublesome neighbourhood or the one thought to be troublesome. Watching how he negotiates himself through his final couple of days shows just how difficult this can be in the wrong neighbourhood being black, because people will automatically see you as a generic criminal. We get plenty of social commentary on how image can place people into brackets, no matter what they are like, with the idea that both the black and white man were involved in the crime and only the black man gets punished. The reflection of the two lives, one which has done crime, one that has gotten away with one shows, how prison can help people learn to live better lives. We get to see how difficult it would be to be a witness to a crime by the law, how somebody can live in fear for just being black. This shows use just how big the problem between races is and just how people can’t learn to get on without judging people on their skin colour.

Comedy/Crime – The comedy in this film comes for looking at the new crazes in health that are outside the normal persons finances and Collin trying to keep his head down. The crime side of the film come from the world that Collin and Miles are living in, which is filled with wheelers and dealers who could put Collin on the wrong side of the law while trying to go straight.

Settings – The film is set in Oakland which shows us just how the neighbourhood operates, we see most of the people there are poorer, we have racial groups that are together, while the police judge on skin colour, we also see how the richer people see it as being cool to move into the neighbourhood too. 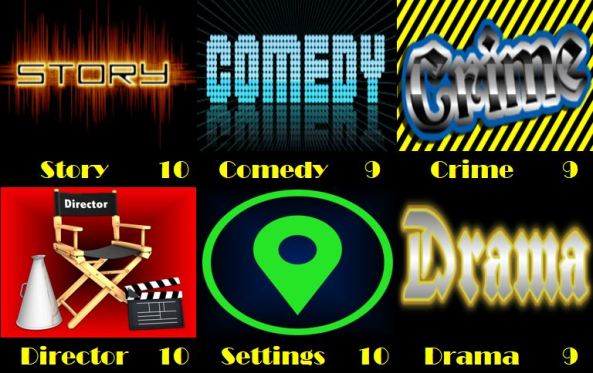 Scene of the Movie – Basement confrontation.

That Moment That Annoyed Me – Hard to find anything here.

Final Thoughts – This is easily on of the best movies of 2018, the commentary on life in the poorer neighbourhoods and the racial divide comes through strong here showing just how the world is difficult if you are from the wrong neighbourhood.