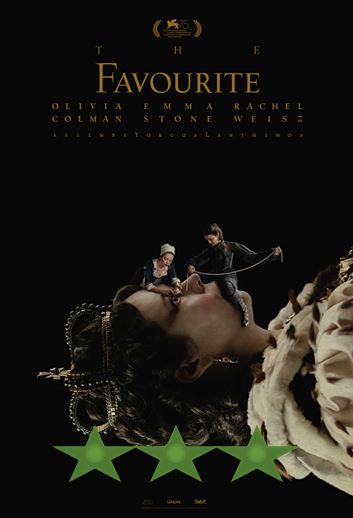 Plot: In early 18th century England, a frail Queen Anne occupies the throne and her close friend, Lady Sarah, governs the country in her stead. When a new servant, Abigail, arrives, her charm endears her to Sarah.

Verdict: For the Costume Lovers

Story: The Favourite starts as England is winning the war against the French in the early 18th century, Queen Anne (Colman) is happy to continue the war, while Lady Sarah (Weisz) her most trusted friend governs the country. When a cousin of Sarah’s Abigail (Stone) arrives searching for a job, she must first earn her spot.

When Abigail starts becoming a favourite of Lady Sarah, she is used to help care for Queen Anne, while dealing with the advances of Harley (Hoult), is she up to something or just a pawn in the game of the ladies.

Thoughts on The Favourite

Characters – Queen Anne is getting older and sicker, she has always turned to Lady Sarah for advice and help, even if she is tired of her stricter ways, she keeps rabbits which keep her occupied, while learns that Abigail is becoming a younger version who will keep her entertained. Lady Sarah has always been by the Queen’s side, she deals with the responsibilities the Queen doesn’t want to get through, she offers her cousin a chance to work in the mansion, only to become jealous of the relationship the two have. Abigail is the maid hired because of family connection, she shows her intelligence which makes her dangerous to anybody who crosses her. Harley is the son of one of the famous people working under the Queen, he will befriend Abigail to get closer to the Queen to learn about her decision-making process.

Story – The story follows a young maid as she tries to rise up through a royal household to reclaim her family name, she will do anything to push the rise through which sees her clashing with the Queen’s most loyal friend. This does feel like a game to stay ahead of the other which is fine for story, though it just tries to be too upper class with how everything unfolds and you can’t help but feel none of this remotely happened.

Biopic/Comedy – The biopic side of this story does leave plenty of questions to be asked as you just don’t see any of these actually be possible. The comedy involved in the film is quirky and will only appeal to certain people.

Settings – The settings in the film are easily the highlight of the film because everything looks completely authentic for the time.

Scene of the Movie – Stop playing.

That Moment That Annoyed Me – To stuck up for the most part.

Final Thoughts – This is a quirky film from a director who is easily one that can split the audience, it is another film that will get wild praise and another one I just don’t get along with.