The Way We Weren’t from Vision Films on Vimeo.

Tagline – His big day is her big problem.

Story: The Wedding Planner starts as we meet Mary (Lopez) a wedding planner, one of the best in the business, she makes the most money and the best ceremonies. Looking to get the biggest deal for company which could see her become partner, she impresses the bride Fran (Wilson) who hires her on the spot, but continuing about her business she finds herself in need from rescue, where dreamy doctor Steve (McConaughey) steps in.

When it turns out Steve is the groom for Fran’s wedding, the new happiness Mary was feelings are shattered, but she must go on with this wedding for her future, leaving her needing to face the rules she swore never to break.

Thoughts on The Wedding Planner

Characters – Mary has dreamed of planning weddings since she was a little girl, now it is her job, but she has given up any hope of love because of this, until she meets Steve, the groom of her latest wedding to plan. She is scared from a broken relationship which has closed her off from wanting to try again. Steve is a children’s doctor (you spell, I can’t) that saves Mary, the two click, but he is marrying Fran the latest client of Mary. He is starting to have second thoughts after spending time with Mary. Fran is the bride in this wedding, a busy businesswoman too, Penny gets a lot of laughs as the assistant to Mary who gets over excited easily.

Performances – Jennifer Lopez is good in this role, she has the look which could steal a heart, but also the determination needed to not let anyone get in her way. Matthew McConaughey is good in this role, he knows that he can pull of rom com which is why he worked so well at this time in his movie career. We do have a good supporting cast that all hit the marks too.

Story – The story follows a woman that had given up on love for herself, that has made a career out of making people’s wedding days their greatest memory. When she does get that one chance moment and meets a wonderful guy she ends up breaking her own rules and needs to look at what love is truly about. While this looks like it is going in a certain direction, it does pose the question about how far long is too late to potentially break up an engagement or do you go through with it and regret a missed opportunity. This is nice question to ask the audience.

Comedy/Romance – The romance comes from all the wedding talk and the idea that you might find someone in the last place you imagine. The comedy comes mostly from the supporting characters over the leads, which gives us good moments to laugh along with.

Settings – The film takes us to plenty of different wedding preparation locations which does make us feel like we can see the different scale people can go for weddings. 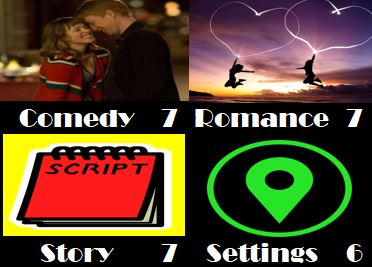 Scene of the Movie – Doll house.

Final Thoughts – This is a delightful romantic comedy that hits the marks it should with it giving the audience an idea of how love can change people’s lives forever.

Overall: Love is strange thing for all. 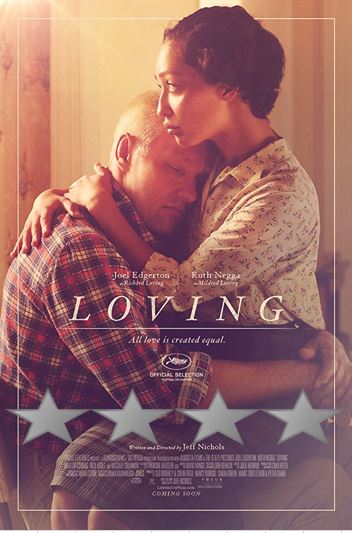 Plot: The story of Richard and Mildred Loving, a couple whose arrest for interracial marriage in 1960s Virginia began a legal battle that would end with the Supreme Court’s historic 1967 decision.

Tagline – All love is created equal.

Story: Loving starts as we meet our interracial couple Mildred (Negga) and Richard (Edgerton) living in Virginia in the 1960s, the two start a family and get married, breaking the laws of the state. The couple are forced to leave the state or face prison time which turns out to be harder than they thought.

The couple look to fight against the ruling which is a battle which will go right up to the supreme court for one of the most important historic decisions.

Characters – Mildred is a black woman living in Virginia, she has a close family and is in love with Richard, she wants to be with him no matter what the law says and will lead the fight for them to be together in there home state. Richard is a white man, a builder for trade who is happily in love, he wants to be able to fight for their love even if the law prevents him. The other characters in this true story include the family members, the people against them and the lawyers that support them.

Performances – Ruth Negga was nominated for an Oscar for her performance, you can see why because she is fantastic, Joel Edgerton also shines in his role which does focus on him bottling in the troubles he is going through. The supporting cast doesn’t get as much time to shine, but they all do good when they are on screen, letting to two stars shine.

Story – The story follows one of the biggest and most important cases in American law, the married couple that are threatened with jail for getting married if they stay in the Virginia. The story follows a decade of their life from the moment they got married to the moment they have their trial. It would be fair to say we could have seen some more of the cases taking place, but for what their story did for the law, the story is important.

Biopic/Romance – This is the real story between Mildred and Richard, an interracial couple that were guilty of marrying when it was considered illegal. The romance shows us just how love can bring people together.

Settings – The film shows us just where Virginia was during the 60s, though the settings not being overly important to the visual but more about the laws. 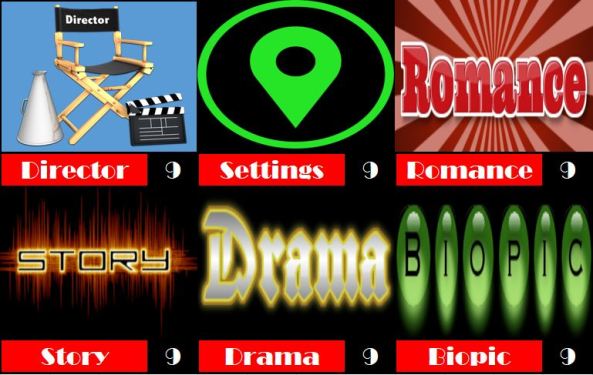 Scene of the Movie – The photo shoot.

That Moment That Annoyed Me – We don’t see enough of the court case.

Final Thoughts –This is an important story that shows us how the law in America needed to be changed, it showed us how naïve they were once and how this story helped show us one story that helped change it.

Overall: Important drama that shows how backwards America once was. 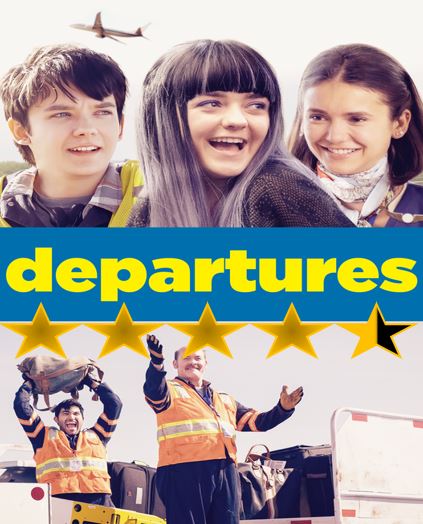 Plot: A hypochondriac working as an airport baggage handler is forced to confront his fears when a British teenager with a terminal illness enlists him to help her carry out her eccentric bucket list.

Tagline – Living in the moment is hard to do alone.

Story: Departures starts as we see Skye (Williams) receives the news that her terminal cancer isn’t giving her much more time, even though she takes the news positively. Meanwhile teenager Calvin (Butterfield) believes he has cancer with his hypochondriac state, even though every test says he is completely fine.

Calvin attends cancer support groups where he meets Skye, who wants a ‘To Die List’ which sees Calvin reluctantly help Skye complete, even though he can’t find the courage to tell her the truth, even though she is teaching him to live hi life more, than he could ever imagine.

Characters – Calvin is a hypochondriac luggage handler, he goes through tests believing he is ill even though every test says he is fine. He attends cancer support groups in a hope to get prospective of his mindset, only to meet cancer victim Skye who brings him out of his shell, he goes from shy to outgoing through his time with Skye. Skye is a British teenager that has been given the terminal diagnosis for her cancer, she has gotten to the stage where she just wants to make the most out of her remaining life, which sees her befriend Calvin, mostly because he is the only friend she can find in the world, using humour as her biggest defence to what is going to happen to her. Izzy is a flight attendant that has been having no luck in love until she meets Calvin and sees a different type of guy in him. The remaining characters we meet include the parents that have been through their own problems, two random police officers that end up helping the two complete the goals which will get the laughs.

Performances – Asa Butterfield takes the leading role here and over the past for years he has handle a few of the teenage coming of age roles, he has never put a foot wrong with his own performances in these, with this film once again showing him to be a big talent in the future. Maisie Williams steps out of Game of Thrones to a role that is full of energy, which should be lower in her character, to show us a character that just wanted to live life to the fullest. Nina Dobrev is the best of the rest, with the supporting cast getting their moments when needed for an extra emotional moment or a laugh.

Story – The story follows a teenage girl that is going to die who befriends a teenage boy that is scared he is going to and the two help each other learn to make the most of their life, through their time together. The story doesn’t hide any facts about the two characters from the audience, which with other films using the same subject matters have used as a late twist in the film. This story is about friendship, adventure, enjoying life and taking chances. While the story might be easy to read just where everything is going to go, you will still need to bring the tissues for this film.

Adventure/Comedy – The adventure elements used in this film are a lot simpler than you would imagine, this is because we get to see how Calvin learns to make life an adventure instead of being scared about what could happen. The comedy in the film is handled tastefully, I have always seen people say ‘you can’t have comedy in a cancer film’ this comedy comes from seeing how Skye is dealing with everything, she wants to laugh and not feel sorry for herself.

Settings – The film is set in New York, using the airport as one of the main backdrops, elsewhere we see how Calvin ends up going places he never would have considered until he met Skye. 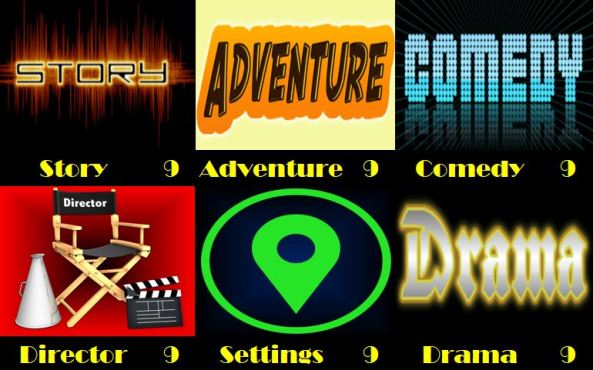 That Moment That Annoyed Me – I am going to pick timescale, not sure if it was days weeks or months.

Final Thoughts – This is an emotional rollercoaster of a film, it will make you laugh, smile and cry, sometimes in the same scene.

Overall: Must watch with tissues.