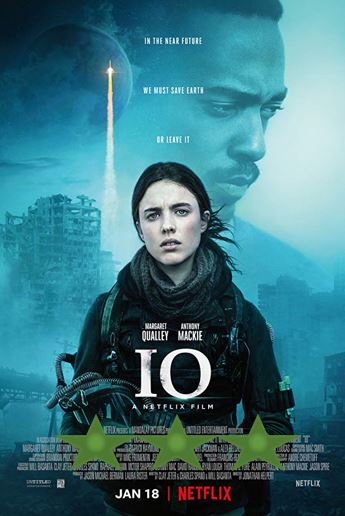 Plot: As a young scientist searches for a way to save a dying Earth, she finds a connection with a man who’s racing to catch the last shuttle off the planet.

Story: IO starts as the Earth has become on the verge of uninhabitable, ships have gone into space to produce a colony in space by Jupiter’s moon Io, while back on Earth Sam (Qualley) is doing final research to see if the Earth is returning to better days. When a new safety zone planet is discovered the mission in space changes and Sam must rush to the final mission into space before she is left on Earth forever. Joined by stranger Micah (Mackie) who is in search for her father Harry (Huston) the pair work together to decide their own futures.

Characters – Sam is one of the few remaining humans on Earth, she has been working on research which could prove there is still hope on Earth, even though her research gets destroyed, she must make the decision to find her love in space, when the last mission off the planet get announced. Micah is the stranger that came to the research site, searching for Harry, he reluctantly decides to help Sam out, while harbouring his own secret for his journey. Harry is the father of Sam, one of the few scientists that told people to remain on Earth, we only see him through flashbacks and video clips though.

Performances – This is a two-person performance, with Anthony Mackie in the supporting of the two, we know his talent which he gets to show off here. Margaret Qualley is the new name for me and she does everything needed to make us care about her characters isolation on Earth.

Story – The story here follows two of the remaining survivors on Earth after an evacuation has seen mass number move deeper into space in search of a new home, one that hasn’t been destroyed. Now we don’t focus on any of the space side of this film which is something you need to prepare for. We focus on the idea of the last few survivors must make the decision on what to do next, leave or stay, this is shown through a series of conversations about what is left, what could change if they left and could Earth be ready to change back to a habitable environment. This is nice to watch because these types of questions are what can drive plenty of real-world questions too. Certain character decisions are however questionable and by the end it just feels like we had something of nothing by the end.

Adventure/Sci-Fi – The film uses the adventure side of the film to show just how far the survivors would have to go if they want to leave Earth, the sci-fi side of the film poses the questions about what would happen if Earth became uninhabitable, think part of what Interstellar offered us without showing us the space missions.

Settings – The film is set in a lone research location, it is in a known safety zone, with the danger zones needing masks to survive in, this is a very much dust covered world which helps us feel like part of this world. 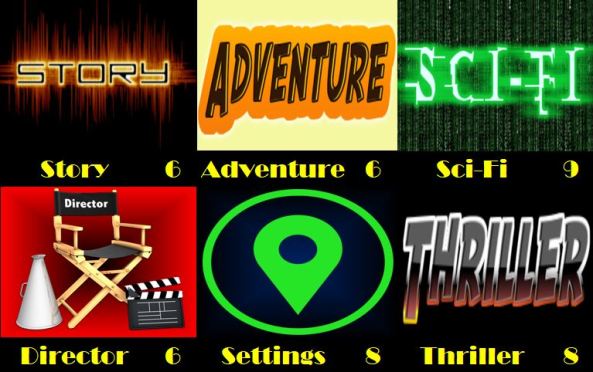 Scene of the Movie – The landing.

That Moment That Annoyed Me – Character decisions.

Final Thoughts – This is a thinking sci-fi film which does help us understand what is going on, there isn’t much action going on here, but will ask the audience questions.

Plot: A Victorian surgeon rescues a heavily disfigured man who is mistreated while scraping a living as a side-show freak. Behind his monstrous façade, there is revealed a person of intelligence and sensitivity.

Story: The Elephant Man starts when Victorian surgeon Frederick Treves (Hopkins) discovers a heavily deformed man John Merrick (Hurt) being used as a side-show freak by Bytes (Jones). Frederick sees the potential in searching for a cure and a break through in science by showing the fellow doctors that he can help John.

However, over time, Frederick learns that underneath all the deformities, John is an intelligent man that is no different than any other man in the world, but not everybody else in the city of London, wants John to have his freedom.

Thoughts on The Elephant Man

Characters – Frederick Treves is a surgeon that has the respect of London because of the incredible work he has achieved through the years. He learns of John and wants to help him, he soon learns that he is just like him, smart, educated and must learn to teach the world to accept John. John Merrick is the Elephant Man, a side-show freak to the man who hold shim captive, once rescued he learns that not everybody in the world is wanting to laugh or scream at him, some want to help him live a normal life, inside he is a kind sensitive man that only wants to live like any other man. Mrs Kendal is a celebrity in London who is the first to help John in the public light, showing the people just how gentle and intelligent John is.

Performances – Anthony Hopkins in the leading role is fantastic, show the world that he could pick up the intelligent role perfectly while showing the kind nature behind his character. John Hurt is the true star of the film, he brings the kind nature to the man that others look at with fear, he shows the bravery to be different in the society that only looks down on people that were different. The rest of the cast are strong throughout the film, they show us the emotional impact the film would have on the people involved.

Story – The story here follows the relationship between doctor Frederick Treves and John Merrick, we see how Frederick saves John from the life of misery, lets him be respected and shows him another side of life away from the freak shows in which he had been trapped in. the story shows us just how cruel the people of the Victoria era were towards people that looked different. Through the story we get to see a fine balance between the men that wanted to use John for financial profit and Frederick that was willing to have him at the forefront of his determination to be remembered for what he bought to science, this one does turn into friendship, but the first impression are clearly there.

Biopic – We follow the time between John Merrick and Frederick Treves as we see the men with similar education and desires in life are both in very different worlds, together they help show the world, just because John looked different, it didn’t make him a bad person, unlike the people that uses him for their own gain.

Settings – The film is set in the Victorian era London, it shows the difference in class between the people and how the people would have been entertained by seeing someone different.

Scene of the Movie – I am a human being.

That Moment That Annoyed Me – The way John was treated.

Final Thoughts – This is a wonderful biopic, it shows how cruel the world was towards John Merrick and how the people that wanted a change showed the world he was just like them.