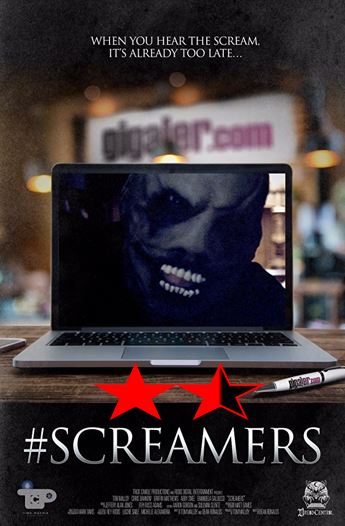 Plot: When an internet company decides to investigate a series of ‘Screamer’ videos, they are confronted with havoc and hell they could never expect.

Story: #Screamers starts as we see the film crew meet the team at ‘Giga!lar’ a specialist company working on improve search engines to show the user what they want just by looking at their history. The main team involves Tom (Malloy) and Chris (Bannow) who created the company, while Griffin (Matthews) who films everyday actions, with software engineer Abbi (Snee).

When the company discovers a brand-new video, they get the most hits they have ever received, they continue to use the same resource for videos, until they learn the girl in the videos are involving a missing girl, are they real or not, they must investigate the truth before going forward anymore.

Characters – Tom and Chris created the website which they believe will take them to financial benefits, they have ambition to get to the next level, they both worked in Silicon Valley and while they can have differences at times they work well as a team. Griffin records most of the activities in the office while being part of the research team, he is one of the few that believes certain decisions being made are questionable. Abbi builds the software and would rather be off camera though she does end up going along with the investigation without worrying about being on camera.

Performances – While it is hard to truly judge the performances because of the lack of activity in this film, the conversations between the characters feel smooth and the stuttering makes sense for businessmen trying to make a name for themselves, saying this we just don’t get anything for them to do.

Story – The story follows an upstart website that has just found a video which has gotten them strikingly high figures, they soon learn the girl in the video is really missing and decide to investigate. This is a found footage story which is fine before we start, the problem occurs with the fact we spend over an hour just watching these guys talk and watching videos that offer no scares or even try to, when it comes to the end of the film it is another one of these flash, bang blink and you miss what just happened, that gives us no true conclusion to the story. This is why found footage films get the slack they receive, literally nothing happens in this film and you will be completely let down by the end.

Horror/Mystery – The horror in the film comes from the final act of the film, it is the frustrating moments of horror, which involves just throwing something at the screen, the mystery however should be a lot more interesting, there is an interesting idea behind what is going on and makes us want to learn more, the problem is the failing of this.

Settings – The film is mostly set in the office before we go and see the locations from the videos which is interesting, though not effective enough.

Special Effects – The effects are simple when shown, we don’t need them that often, but you can see they are from low budget YouTube like videos.

Scene of the Movie – The first look at the investigation.

That Moment That Annoyed Me – The end.

Final Thoughts – This is a film that has a lot of potential, the problem is, it fails to capture that potential leaving us feeling flat by the end.

Overall: Bad horror and not the enjoyable bad.