5 Questions About The Trailer

Plot – Super-Assassin John Wick (Keanu Reeves) is on the run after killing a member of the international assassin’s guild, and with a $14 million price tag on his head – he is the target of hit men and women everywhere.

1) Can this action be just as perfect as the last two films?

2) Will we get to see just how big this world involving the assassin truly is?

3) How big will the body count be?

4) Will the dog survive?

5) Can we just watch John Wick riding a horse killing a motorcyclist on repeat?

What are your thoughts on the Trailer?

Check it Out Here

Plot: A zombie apocalypse threatens the sleepy town of Little Haven – at Christmas – forcing Anna and her friends to fight, slash and sing their way to survival, facing the undead in a desperate race to reach their loved ones. But they soon discover that no one is safe in this new world, and with civilization falling apart around them, the only people they can truly rely on are each other.

Anna wants to escape from the town and see the world, Steph wants to be accepted for her work, while John doesn’t want to see his crush Anna leave. Their lives are going to take a different direction when a mysterious sickness spreading around the country, is turning people into zombies and now they need to fight to survive the apocalypse.

Thoughts on Anna and the Apocalypse

Characters – Anna is the ambitious student that is tired of the routine of life, she has lost her mother at a younger age and doesn’t want to just go straight into university. This decision hasn’t impressed her father as she has bought herself the ticket to leave, when the zombie outbreak occurs she bands together with friends to figure out what to do next. John is the best friend of Anna’s who has been in love with her for years, he doesn’t want to see leave while preparing himself for art school, he sees the outbreak as the chance to tell Anna how he really feels. Steph runs the school blog and is always trying to push the boundaries of what she can report on. She is facing Christmas alone this year, which gets to take her in new direction with her friends. Chris is the film student that is currently directionless in art form, he uses the outbreak as a chance to film a real story. we have Nick the jock, Lisa the girlfriend and Savage the headmaster that is more focused about keeping the school together than keeping people alive.

Story – The story is simple enough, we get a group of school students that wake up to learn the zombie apocalypse has happened and they look to get to their loved ones. This does follow what we know from the zombie genre which is fine because it does work and each character does have their own motivation for every decision that they make. I will say that one part of the story does feel skipped over though which disappoints, though this does have a couple of twists along the way which fit the surprise of the film. if you do take the zombie elements out of the story we get to see how the teenagers are dealing with the big future decisions which will shape their lives, I feel this is handle the right way too.

Comedy/Horror/Musical – The comedy in the film works because it does take the zombie moments and gives us the laughs we need, the horror side of the film focuses more on the idea of the outbreak, we are never scared, but we don’t need to be. The musical side of the film is what makes this unique because we get brilliant songs in ‘break away’ ‘Hollywood ending’ and ‘human voice’ that could stick in your head.

Settings – The film is set in a small Scottish town, which shows the local hang outs the teenagers will be, the shortcuts only the locals would know with the school being the central location.

Special Effects – The film turns to the effects when it comes to the zombie action which never look out of place or going over the top like others can.

Scene of the Movie – I am picking the songs here.

That Moment That Annoyed Me – One part of the film felt skipped over.

Final Thoughts – This is an absolute delight of a movie, the core to the story is familiar, but the musical side makes this stand out on its own which will make it one of the must watch Christmas movies ever year. 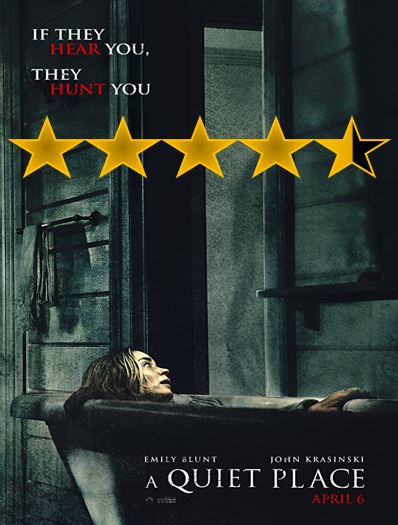 Why I’ve Picked this choice – This horror follows a family living in a world where sound will get you killed because of the creatures that lurk just for sound for their kills. This film isn’t afraid to show us just what we are going to be facing with the opening scene showing us, no one will be safe. We have a brilliant cast spearheaded by Emily Blunt you gives us the second best performance in horror this year. This was also the best cinema experience of the year as nobody in the audience wanted to cough through the film.