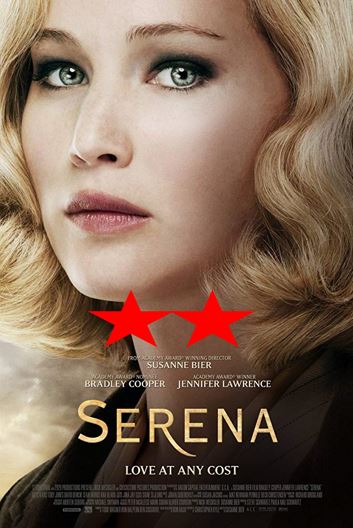 Tagline – Some loves can never let you go.

Story: Serena starts as we see how George Pemberton (Cooper) and his timber empire is struggling with money, meeting Serena (Lawrence) the two are married and her past in the timber industry helps George make decisions which will increase the profit he is making.

When George’s long term friend and first to turn to Buchanan (Dencik) starts to turn away from his ideas to work with the local Sheriff McDowell (Jones) who wants to stop the timber trade and make a national park, the life of George is turned upside down with only Serena to keep his head on straight.

Characters – George Pemberton is a timber tycoon, he has built up his empire and the work seems to be going well, though he is in financial hardship, friends turning on him and turning to methods which could bring down his whole empire. Serena is the woman from another world, daughter of a timber tycoon herself who tragically lost her family in a fire, she knows how to get the most out of a profit and stars to help run the business with George. Galloway is a tracker that works to help locate dangers for the crew, on the side job he makes sure that George can hunt the animals he desires. Sheriff McDowell is the man against George, he wants to turn the woodland area into a park which could one day bring tourists to the area.

Performances – Bradley Cooper is known more for his work in comedy, sure he has tackled dramas before and usually done a good job, in this he struggles to make any impact on the film, though he isn’t the only one. Jennifer Lawrence is no where near her best in this film as she struggles to make the impact her character seems to need to be having on the film. Rhys Ifans is the only one that seems to be interesting to watch in this film. I would say most of these comes from the poorly written characters.

Story – The story here follows a timber tycoon who is about to lose his fortune until he meets Serena who only makes thing even crazier for him. Well that is what I got from the story, I am not going to lie, there isn’t much going on in this film, I don’t know if this is based on a real person who just the depression-era in general or even the time scale of the movie. We do seem to have a storyline about deforestation versus a nature park which for the most part is a back burner while also having a story about love I think. This is one of the weakest stories I have ever seen, it doesn’t capture anything we need to make us enjoy what we are seeing.

Romance – The romance side of the film is a quickie marriage and learning that love happened before the wife arrived.

Settings – The film is set in Colorado which was a big part of the timber industry, it works for the film without giving us too much to work with visually.

Scene of the Movie – George saving the crew member.

That Moment That Annoyed Me – Most of it being boring.

Final Thoughts – This is a movie that drags along way to slowly without any meaningful storyline arcs going on, we have unlikable characters and nothing that captures our attention.

Overall: Dull is being nice.

Why I’ve Picked this choice – This is a Netflix original that showed the life of a teenage girl in Brooklyn that had found herself jumping between foster homes before she joins the boys wrestling team at school, where she finds a new talent that her estranged father wants to take advantage off, giving her a difficult decision in her early life. Elvire Emanuelle is fantastic in this leading role and should be a name to watch out for in years to come. 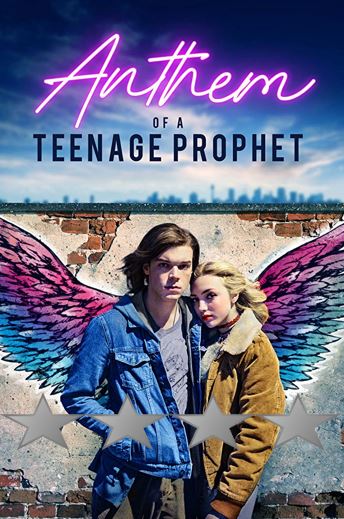 Plot: Anthem tells the story of Luke (Monaghan) a teenager who foresees the death of his new best friend Stan (MacNicoll), the most popular guy in school. When this premonition becomes reality, Luke must deal with the trials and tribulations of being dubbed “The Prophet of Death” and being titled a freak by the entire town.

Story: Anthem of a Teenage Prophet starts when high school stoner Luke Hunter (Monaghan) gets a vision that his close friend Stan (MacNicoll) will be killed on the way to school in the morning, the next morning, Stan is killed, leaving the rumours about his vision spreading like wildfire through the town. Stan’s girlfriend Faith (List) is broken up about his death as you would imagine, while Luke feels the guilt of not being able to help.

When Luke suffers a second vision of death, he tries to stop it, failing in the process, his mother Mary (Lewis) tries to help him as Luke must face the reality that he will be heading off to college and this new pressure is only going to make his life more stressful.

Thoughts on Anthem of a Teenage Prophet

Characters – Luke Hunter is the normal high school slacker, he spends his time getting stoned more often than studying and it is while getting high, he gets the vision of his best friend dying, when it actually happens, he is left guilt riddled and scared of just what he might be capable off, add in the pressures of high school, the anxiety of growing up and living up to his parents expectations, Luke will face the toughest couple of months of his life. Faith was the girlfriend of Stan the teenager killed, she is left broken and turns to Luke for friendship through the difficult time. Mary is Luke’s mother that does her best to help him through his own struggles with what he saw and what he is going through when it comes to his future. Fang is Luke’s oldest friend, he has his own problems and with Luke being there for him, the question remains can they help each other through the struggles.

Performances – Cameron Monaghan in the leading role here is outstanding, we get to see him show nearly every emotion imaginable for a teenager going through the troubles of high school, we understand each moment and this is because of his performance. Peyton List continues to give us strong performances here with her work, showing the loss she suffered in the film. Juliette Lewis bring the experience to the film handling the mother role effortlessly and knowing how to like Monaghan take centre stage.

Story – The story here shows the struggles a teenager has after having a vision of his best friend being killed becomes a reality and he must deal with the guilt of not being able to stop the accident, while continuing to use this gift to try and help other people close to his life with their own struggles. This story gets to reflect high school anxiety, pressure and demand with the guilt of not being there for friends, showing us how a couple of moments extra time with each person in your own life will provide a positive out light which will make life more enjoyable, even after getting through tragic events. This is going to be one of the best coming of age stories you will see this year, balancing everything out perfectly for the story to unfold at a natural pace.

Settings – The film is set in mall town America, showing the unity between the people in the neighbourhood and the desire to escape to make the most of life from the students, we have iconic settings that will help people achieve what they want from their moments in life.

Scene of the Movie – Climbing.

That Moment That Annoyed Me – How easy it is for the teenagers to get drugs.

Final Thoughts – This is easily one of the best films you will see, it has a serious subject matter that is relatable for the audience as well as showing us just how hard the modern pressures of teenage life can be.