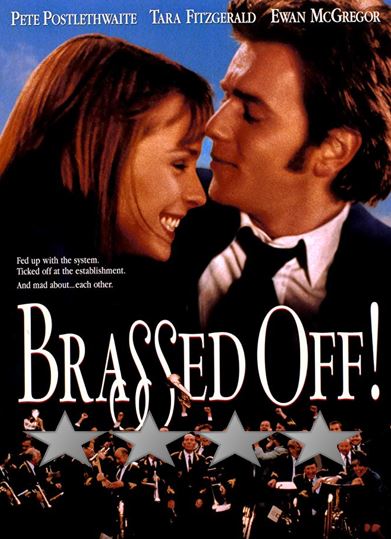 Plot: The coal mine in a northern English village may be closing, which would also mean the end of the miners’ brass band.

Tagline – Fed up with the system. Ticked off at the establishment. And mad about… each other.

Story: Brassed Off starts as we head to the small Yorkshire coal mining village, Danny (Postlethwaite) conducts a brass band for the locals which is designed to keep spirits high even with the economic changes in the village. Danny is leading his band into the semi-final, with his son Phil (Tompkinson) and granddaughter of band hero Gloria (Fitzgerald) back in town, the bad is given new life.

With the threat that the mining pit might be closing, the town is filled with tension and the band is pushed to their limits, Danny does everything he can to keep the band together even while battling his own illness, to show that coming together can bring hope to a struggling town.

Thoughts on Brassed Off

Characters – Danny is the conductor of the band, he has kept the band going for years now and has always used it to keep the community together. He wants to one day play at the Royal Albert Hall, with this potentially being his last chance because of an illness he is battling. Gloria returns to her hometown working for the management that is looking at the closure of the mine, she joins the band because of her grandfather’s legacy and soon finds herself being shafted because of her role in the potential closure of the mine. Andy is the youngest member of the mining team and band, he grow up with Gloria and gets caught in the middle of the two sides. Phil is the son of Danny, he suffered the most during the last strike and now he must do everything he can to keep his family together when his past starts to catch up with him.

Performances – Pete Postlethwaite is fantastic in this leading role, he was always great in these type of roles, where he can be calm while hiding something from everyone. Tara Fitzgerald and Ewan McGregor are both good in their roles, while it is Stephen Tompkinson is the real surprise package with his well-rounded character.

Story – The story shows us the struggles a mining community in England became the latest victim of the economy change that swept the land, they are held together by a brass band as we see the financial struggles on the outside. This is a good glimpse as the change in culture that went through England and showed that communities can come together for the people suffering most. The environment does however feel similar to the Billy Elliott environment, which I know was later, but is easily more well known. We get the good moments even if a love story does feel thrown in for the sake of it.

Comedy/Romance – The comedy through this film does work and does feel like everyday situational comedy. The romance in the film is the weakest pat of the film as it mostly feels thrown in.

Settings – The film keeps us in the small mining town in Yorkshire, the heart of mining land that relies on one source of income to keep the community together.

Scene of the Movie – Hospital performance.

That Moment That Annoyed Me – The romantic story mostly gets boring.

Final Thoughts – This is a British film that may have been forgotten through the years, it has great performances and a story which would have affected thousands with the economic side of things.

Synopsis –Columbus, Tallahasse, Wichita, and Little Rock move to the American heartland as they face off against evolved zombies, fellow survivors, and the growing pains of the snarky makeshift family.

The Main Reason I Want to See It – Zombieland is easily one of my favourite zombie comedies, it felt like Dead Rising the video game which is one that can have plenty of fun killing zombies, the film however does have heart to it too which is great to see.