This is a revisited review, I first did this as one of my very first reviews in 2012.

Plot: Video game adventurer Lara Croft comes to life in a movie where she races against time and villains to recover powerful ancient artefacts.

Tagline – Who Is Lara Croft?

Story: Lara Croft: Tomb Raider starts on the anniversary of Lara Croft’s (Jolie) father death, with a once in a lifetime planetary alinement happening, Lara just so happens to discover the all seeing eye in her mansion and now she is involved in an adventure she is interested in. Lara’s connection lead her to Manfred Powell (Glen) a man assigned to locate the eye for secret society that want to use its powers for their own desires.

Once Manfred takes the artefact, Lara must go on adventure showing her tomb raiding skills hoping to stop them powerful device causing havoc on the world.

Characters – Lara Croft lifted straight from the video game, the Lady of Croft Manor, she has found treasures all over the world becoming slightly bored of the popular location, getting a hidden message from her later father Lara’s interest spikes and soon she will be battle a secret society that are using her latest discovery to hopefully control time. We know she is the kick ass action heroine from the video games, calm through each situation, competitive rivalry with Alex West and the best in her field. Lord Richard Croft had died before the story starts, he appears in dreams guiding Lara as he was the one that trained her, he started learning about this event long before it started. Manfred Powell is hired by an underground society that want control of time, he will do anything to get what he wants to prove his value to the society and doesn’t lift a finger when it comes to searching for treasure. Alex West is the American rival to Lara, he works for money over desire to find treasure even if the two do just have an honest rivalry. Bryce and Hillary are the two most trusted people in Lara’s life, one works on her tech while the other looks after the manor.

Performances – Angelina Jolie was the perfect choice in the year 2001 for this role, she was the best action heroine for the time, had the look of Lara Croft down to perfection as well as the swagger filled attitude. Jon Voight while only in a couple of scenes is good as the father figure needed for Lara. Iain Glen is good as the calculated villain who can kill just as quickly as Lara, he shows the calmness through the film to stay a threat in the film. Daniel Craig as the rival tomb raider is fine, his accent is his weakness though. Noah Taylor and Chris Barrie get most of the laughs which keeps the story on a lighter note. 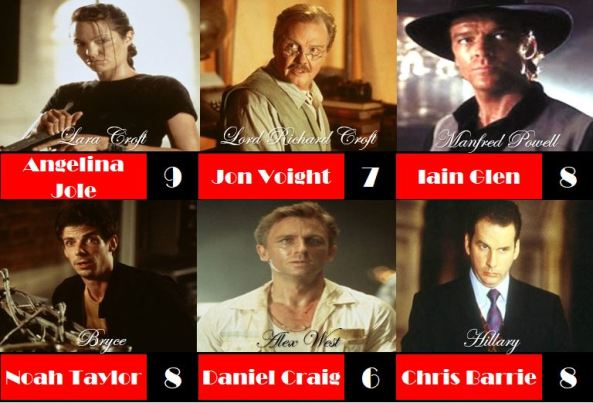 Story – The story gives us one of Lara Croft adventures as a Tomb Raider against the Illuminati. The story shows us an established Lara, accepting her place in the high society with connections in the antique world, we see she is trained in combat and this helps us get right into the story. the story shows us how Lara is almost bored of the generic treasure hunts and this knew one sparks her interest once again. When it comes to the story it unfolds as you would imagine, going from one location to the next location for the next chapter of the adventure as we get the different parts to complete the quest.

Action/Adventure – The action in the film is set pieces set up on the different adventures Lara is on, be it in the tombs or in the manor which get bigger as the film goes on.

Settings – The settings take us from the manor, to the tombs in the jungle and Siberia as well as Venice. Each place would be where you could imagine Lara going on her adventures.

Special Effects – The effects are a mix of good and bad, for the time however they would have been excellent to watch, with the stone figures in the tomb sequence.

That Moment That Annoyed Me – Certain effects have dated.

Final Thoughts – This is a fun action adventure bring to life one of the most iconic video game characters in Lara Croft.

Synopsis – Based on the graphic novels by Mike Mignola, Hellboy, caught between the worlds of the supernatural and human, battles an ancient sorceress bent on revenge.

The Main Reason I Want to See It – I was a fan of both the first two Hellboy movies, I liked the world created and always wanted to see the next chapter to the story, well I understand this is a reboot, I can’t wait to see the world created with this new director behind the camera.

Synopsis – A spinoff of The Fate of the Furious, focusing on Johnson’s US Diplomatic Security Agent Luke Hobbs forming an unlikely alliance with Statham’s Deckard Shaw.

The Main Reason I Want to See It – When Fast 8 happened it wasn’t as strong as the previous outing because we learnt about the problems between Johnson and Diesel, the one part of the film which truly stood out though, was the chemistry Statham and Johnson had as they learned to work together, now we get their own adventure and you bet I will be first in line for this one.

With the final round we are returning to the worst of, this time in animated movies, we seem to get a lot of sequels that just don’t work, this is going to give us a chance to vent about the animated cash ins we didn’t want to see.

Next Round – This is going to be the final Opinion Battles in its current form, I would like to thank everyone for playing and voting along.

I wasn’t a fan of the first Atlantis, this sequel brings the character back in three separate stories as it was meant to be a pilot for a television series, which only make things worse. The mysterious are not interesting and by the end of the mini adventure we are left wondering just what was the point.

Milo – Stuff and That

Do I really need to explain this one? CHIP-WRECKED. CHIP. WRECKED.

The Little Mermaid 2: Back to the Sea

To be honest, it’s pretty bloody hard to sequel-ize ANY Disney classic. That’s definitely one thing that sets the Classics aside from Pixar – Pixar do seem able to make pretty good sequels. Perhaps because they don’t generally have the ‘big’ happy ending and are more comical, who knows. I don’t know. I’m wittering. But yeah, The Little Mermaid is my all time favourite animated film and this ridiculous sequel was NEVER needed. If it had been brought out as a cut-price, cheap kids film maybe it would have been excusable but putting it up with, arguably, one of the best kids movies OF ALL TIME………well, it never had a hope. And if that wasn’t enough argument, in 2011,Total Film ranked it 27th of the 50 worst children’s films ever made. So vote for me. It’s my birthday this month!

I’m sure there can be a ton of direct to video Disney movie to choose but for the mainstream Pixar delivered quite a stinker with Cars 2. It was boring and not fun. There was nothing new and seemed like an obvious cash grab. It was a letdown from the first one.

Worst animated sequel is difficult as there have been so many bad ones. Disney alone has loads of straight-to-video ones that I haven’t even seen. I’m sure a lot of those are actually the “worst” but I’ll go with a cinema release and say Cars 2. That’s mainly because it’s the worst Pixar film yet they couldn’t just let it die. I say this as a huge Pixar fan, too. Before Cars, they could do no wrong. Cars was the first disappointing Pixar film. And yet they made more..

This is a bit of a hard one since no obvious candidates immediately come to mind. I’m guessing that something like Cars 2 will be the favourite but I haven’t seen that one – not having enjoyed the first one enough.

For some reason, there are plenty of direct-to-video sequels to amazing Disney films (The Little Mermaid 2, Lady & The Tramp 2 – WHY?!) but I’ve avoided many of them on principal.

But I have seen this particular one (plus the sequel to The Lion King and the Aladdin follow ups, which I actually liked) and it’s just another example of an unnecessary and inferior sequel to a beloved classic. It’s unremarkable, the story’s dull, the cast isn’t as good and the animation looks cheap.

A vote for this is a vote against direct-to-video Disney sequels!!

Interesting idea that just doesn’t work as well as I would have hoped. The best thing about this film is the innocent idiocy of Mater. The story feels too unoriginal and many of the reveals are too predictable. Deviates too far from the original concept and just isn’t as interesting.