Plot: In this live-action feature of the cartoon show, Fred Flintstone finally gets the job he’s always wanted, but it may just come at a price.

Story: The Flintstones starts as we jump into Bedrock the place we loved as the cartoon, Fred Flintstone (Goodman) helps out his best friend Barney Rubble (Moranis) adopt Bam Bam their first child, in return Barney secretly swaps test scores with Fred leading to Fred getting a promotion to vice President.

Fred finds himself in a role he isn’t prepared for as he is being used by Cliff Vandercave (MacLachlan) who wants to use Fred to get away with stealing from the company and leaving Fred to take the blame, it isn’t long before the two families friendship put to the test.

Thoughts on The Flintstones

Characters – Fred Flintstone is the loveable idiot with a heart of gold, he works in the quarry, enjoys bowling and always has Barney for company, in this adventure he ends up in a role he can’t handle and his friendship being tested. Barney Rubble is the best friend of Fred’s that helps Fred get a promotion only to suffer the consequences, he wants to keep it a secret which will ruin the friendship. Wilma and Betty are the wives that support in the places with Cliff Vandercave being the typical business minded villain.

Performances – John Goodman in the role of Fred work wonderfully because he first looks the part and secondly knows how to handle comedy. Rick Moranis handles the side comedy wonderfully while the rest of the cast are good without being overly interesting.

Story – The question here was how do you turn the much loved cartoon into a functional feature length film, the story here does show us how Fred gets himself into a position he can’t handle and shows how Barney is the one to help him out of the position. It does feel like a feature length episode of the show which works well for the story even if it does have a couple of more serious sides to the story. the story is what we have seen in other comedies and won’t be overly testing on the audience.

Comedy/Family/Fantasy – The film uses the comedy much like the cartoon does, things feel over the top and do get the laughs required, the whole family can enjoy moments of this film which does know how to offer comedy for all ages.

Settings – The look of the Bedrock look great and pays the respect to the cartoon where we see the different dinosaurs living with the humans. Everything looks and seems to be practical too.

Special Effects – The effects show us how practical effects can be used to create a world where the human dinosaur relationship works for the film. 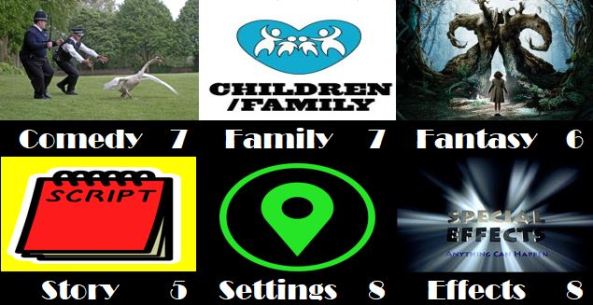 Scene of the Movie – The quarry showdown.

That Moment That Annoyed Me – Not enough Dino.

Final Thoughts – This is a fun family film that can be enjoyed by the fans of the original show, it has the jokes and references to what we know.

Overall: One for the family.