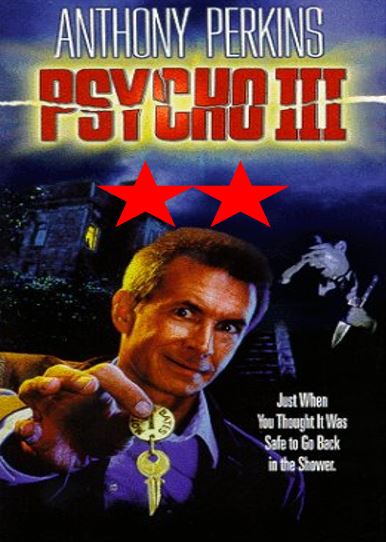 Plot: Norman Bates falls in love with a fallen nun who stays at the Bates Motel alongside a drifter and a curious reporter. Meanwhile, “mother” is still watching.

Tagline – Norman Bates is back to normal. But Mother’s off her rocker again!

Story: Psycho III starts when nun Maureen (Scarwid) is involved in a terrible accident at the monastery, forcing her on the run receiving a lift from drifter Duane (Fahey). Duane ends up at the Bates Motel getting a job from Norman Bates (Perkins) whose latest guest ends up being Maureen.

When Norman starts seeing Marion Crane in Maureen, he starts to battle his nightmares once again and sees his chance to redeem himself after saving her life, but Mother is always watching him.

Characters – Norman Bates has the Motel open and is looking for support, the town has accepted he has done his time, but he still battles his demons and his mother in his head. His latest guest brings back the memories of Marion Crane and the battle in his mind becomes the toughest since his release. Maureen is a nun that is on the verge of suicide, this leads to a death on the monastery she is part of and her going on the run, ending up at the Bates Motel becoming friends with Norman, little does she know she is similar to Marion Crane.

Performances – Anthony Perkins does keep his performance strong where you can believe how creepy he does feel in each scene, though stepping behind the camera didn’t help keep the focus on his character. Diana Scarwid is good for the most part even if her screaming doesn’t feel as real as it should. Jeff Fahey makes for a good drifter character knowing just how sleezy to make his character.

Story – The story here follows the events of Psycho II as we see where Norman is after what happens at the end of that film, Norman is still balancing his new life with his battle of his mind about his mother as the lost souls find themselves in the motel. The story feels strange when connecting together because we have part romance, part loss of control and neither connect on a level we would enjoy and everything just turns into chaos. For the most part this tries to address the idea of being part of the public again when Norman is clearly unstable. There is a lot of material which tries to balance the idea of the murders happening again only this time Norman believes it might be him.

Horror/Mystery – The horror in this film comes from the additional body count happening, there is no suspense before the murders though, the mystery comes from just whether Norman is in fact killing again or is it in his mind.

Settings – The film does take us back to the Bates Motel which does look creepy still, but is never shown in the fear filled atmosphere of the previous films.

Special Effects – The effects in the film do feel weaker too, as we don’t get to see enough of what is happening to the characters during the murders. 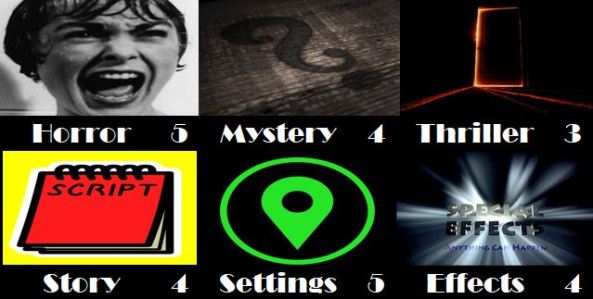 Scene of the Movie – The opening sequence is the stand out scene.

That Moment That Annoyed Me – The screaming is never believable.

Final Thoughts –This is a weaker addition to the franchise, it doesn’t have enough to make it feel worthy of the franchise and shows the decline we have taken. 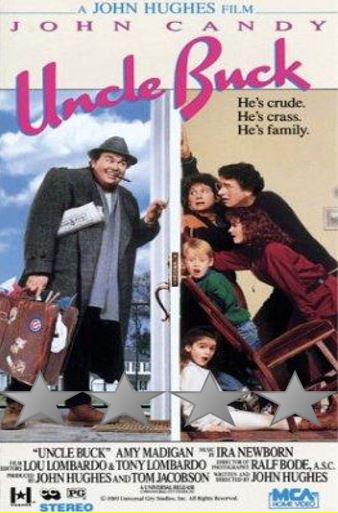 Plot: Bachelor and all round slob, Buck, babysits his brother’s rebellious teenage daughter and her cute younger brother and sister.

Story: Uncle Buck starts when Cindy (Bromka) and Bob Russell (Brown) must rush out of town, the only option is to turn to Bob’s brother Buck (Candy) to look after their three kids, eldest Tia (Kelly), Maizy (Hoffman) and Miles (Culkin), they know it is a risk, but it is their only option.

We follow how Buck always keep a happy face on the situation regardless of how people are treating him, with the laughs coming from the misfortunes.

Characters – Buck Russell is the unreliable brother to Bob, he struggles to keep a job, stay in a relationship, but in his time of need Buck comes to babysit his nieces and nephew, his methods do offer more love than the kids are normal even if the eldest doesn’t like the attention. Tia is the teenage daughter that believes she could have looked after her young siblings, she doesn’t like having Buck around and would rather be off partying with her boyfriend. Miles is the son that takes a shine to Buck because he is willing to play along with his games. Maizy is the younger daughter who needs the attention, she misses her mother and Buck does the best to comfort her.

Performances – John Candy is brilliant in this leading role, he gets moments where he gets to show his comedy style, while also handling the serious side to his character. Jean Louisa Kelly is good in her role because you instantly don’t like her even though she is playing the typical moody teenager. The two youngster Culkin and Hoffman both give us good performances for their age, Culkin does get a lot of the better funny scenes of the two.

Story – The story here follows the unwanted uncle forced to look after his nieces and nephews as a last resort. We see how he gives everything to make sure they are kept safe even if not everything is going well with household chores. This story does get to focus on certain family relationship that could be strained through time, even if the person means well with their actions. It does play into the unlikely person being the most important person in a child’s life when they need them most.

Comedy – The comedy in the film lets John Candy handle his style, show how Culkin was going to be a mega star with how cute kid routine which steals nearly every scene.

Settings – The film takes us to a suburban neighbourhood where the family lives to keep the story flowing with the heart and soul is needs. 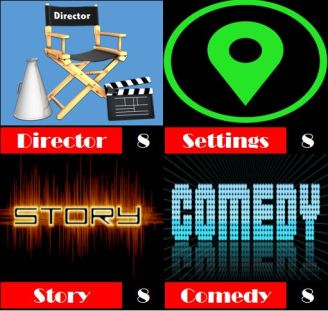 Scene of the Movie – Quick questions between Miles and Buck.

That Moment That Annoyed Me – Miles and Maizy do take the back burner for the second half of the film.

Final Thoughts – This is a fun comedy that lets the star show his skills and gets laughs every time it goes for.