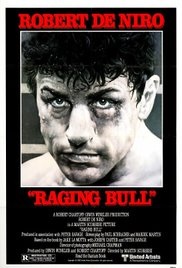 Plot: An emotionally self-destructive boxer’s journey through life, as the violence and temper that leads him to the top in the ring destroys his life outside it.

Story: Raging Bull starts in 1941 the Bronx, New York City where we meet boxer Jake La Motta (De Niro) and his promoter, sparing partner and brother Joey (Pesci). The two look to set up the next fighter even though the married Jake spots the 15-year-old Vickie (Moriarty) who has connections with the mob.

Through the 40’s Jake remains unbeaten and marries Vickie and on the verge of a potential title fight. With his career taking off, his personal life is starting to fall apart as he becomes paranoid about what Vickie is doing with his violent side coming through.

Characters/Performance – Jake is a brilliant boxer, one of the best of his generation but his out the ring temper causes more problems in his life as he is insecure about his wife’s loyalty, his brother’s loyalty and the people in his life. Vickie is the long-suffering wife that must deal with the temper of Jake while trying to retain a personal life against his wishes. Joey is the brother of Jake who also trains and books his fights but the two are always at conflict with each other.

Performance wise, De Niro is great through this film and you can see why people rave of his performance but I feel and we know he is capable of even better now. Pesci does a good job in what must have been a break through role for him. With Moriarty in her debut hanging with the big names very well.

Story – The story does follow the career of Jake La Motta from small time boxer to champion to what happens to him after his career in the ring is over, we follow his paranoia in his personal life which comes out in his aggression. If you are into your boxing history you will enjoy the story otherwise you might not connect as well.

Biography/Sports – Looking at the career is interesting but I do feel other boxing films are painted a more interesting career, the boxing itself looks fantastic through the film.

Settings – The settings show us the time we are seeing the events unfold in which is done well throughout.

Final Thoughts – This is a boxing film that I have heard huge things about, but I didn’t find myself getting engaged with the story in the way I was expecting and found elements of this film kind of boring.

Overall: This is one of the most popular boxing films of all time but it won’t make the top of any of my lists.