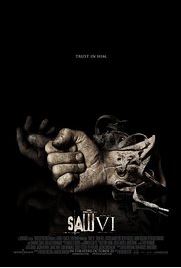 Plot: Agent Strahm is dead, and FBI agent Erickson draws nearer to Hoffman. Meanwhile, a pair of insurance executives find themselves in another game set by Jigsaw.

Story: Saw VI starts as we finish the aftermath of Hoffman (Mandylor) cleans up the Strahm body. We move to Umbrella Insurance where William (Outerbridge) who has been handling claims along with his team that decide who does and doesn’t qualify for cover. Agent Erickson (Rolston) has taken over the investigation believing Strahm has gone missing and the new prime suspect in the Jigsaw murders.

Hoffman gets the deal done with Erickson to work together on the case with a surprise return from a previous film. in a twist of events Hoffman is now working with Jill (Russell) John’s (Bell) ex-wife who is following the final request, to take place William in the latest game in revenge for the insurance he refused to give him to cure his cancer.

Characters – John is still involved in these films, now we watch him continue to build the bigger picture as he teaches Hoffman about this theories, we also see how he did have other helpers including his ex-wife but this time the game is personal as he uses the insurance company that refused to help his cancer treatment. Hoffman finds himself in the clear of any suspicious after framing Strahm now, he builds one more game with Jill as he works with the FBI to solve where Strahm is now. Erickson takes over the lead of the investigation of the FBI, he brings Hoffman into the investigation to locate Strahm but just how much will he give away. Jill is revealed to be involved in the games after films where she denied being involved, she can work with Hoffman but seems to have been set her own game. William is the latest man to be tested, he must choice who lives and who dies from his team of ruthless insurance team.

Performances – Tobin Bell once again is the star of the show, being calm through each scene as we see how John would be calculating each decision through the movie. Costas has become the backbone of this franchise not getting the praise he deserves. Mark Rolston is good but doesn’t get enough time on screen. Betsy Russell finally gets a chance to shine in the one of the movies in her role. Peter Outerbridge is good too as the man going through the test.

Story – The story once again is split into two, the game is frustrating to watch as it goes against the idea of Jigsaw, even though it is his game, it is personal and doesn’t leave the players any chance to survive, with a twist that doesn’t click. The over arcing story does work though, as we continue to watch Hoffman design the games where he is still must escape suspicious from the FBI. We do continue to build the bigger picture but for the most part we focus on the game too much

Horror/Mystery – The horror does continue with the high levels of gore which will work for the fans of the series, but the mystery side of the film does seem to have taken a step back here.

Settings – The settings all work for the film showing us the underground trap design as the high life insurance people would never go down to that level to hear a story.

Special Effects – The effects are as always great from start to finish of the film, sing mostly practical to create the gore.

Scene of the Movie – Escape the Bear Trap.

That Moment That Annoyed Me – The game goes against the ideas.

Final Thoughts – This is the weakest of the franchise to date, it goes for shocks over the storytelling process which disappoints after the last two improvements.

Overall: Weakest of the franchise.

Plot: Ten stories are woven together by their shared theme of Halloween night in an American suburb, where ghouls, imps, aliens and axe murderers appear for one night only to terrorize unsuspecting residents.

Thoughts on Tales of Halloween

3 I enjoyed the Most

·        The Night Billy Raised Hell – this story follows a young boy tricked into pranking the town crazy only to find himself going on a night out with the town crazy raising havoc all over town. This has a great twist in it and having Barry Bostwick in only makes it better.

·        Friday the 31st – This follows a lone girl being hunted down by serial killer similar to a Jason, only for things to take a very different twist half way through, this has comedy and horror down perfectly.

·        The Ransom of Rusty Rex – When two criminal kidnap a boy on Halloween hoping to claim a ransom for him, but things take a turn when the discover what they have taken this is moments of humour that work very well and can be enjoyed too.

·        The Weak and the Wicked – This story follows a young man being chased down by a group of psychotic thugs, but he has a reason, this is a good story, but generic in how things unfold.

·        Grim Grinning Ghost – This follows a trip home by a woman that soon becomes haunted by ghosts and then it seems to end.

·        This Means War – We have rival neighbours trying to compete over the best Halloween displays, which feels like an extension of All America Rejects Give You Hell.

Final Thoughts – This is one for the anthology fans out there, the stories are short and sweet which is what the fans of the horror stories will enjoy and this ticks the boxes well, it does have a few misses, but what anthology doesn’t.

Overall: Nice simple anthology that can be enjoyed by horror fans.