Plot: A military vessel on the search for an unidentified submersible finds themselves face to face with a giant shark, forced to use only what they have on board to defend themselves from the monstrous beast.

Tagline – You can bet she won’t eat just one.

Story: Megalodon starts when a Russian submarine captained by Ivanov (Mikitas) unleashes a megalodon in American waters, the US Navy is monitoring the location discovers the sunken submarine, with Captain Streeper (Pace) letting Commander Lynch (Harris) conduct a rescue mission.

When the rescue attempt goes wrong Streeper wants to save his team, while Admiral King (Madsen) refuses to let military personal risked to save people that are more than likely dead. The military battle on the surface conflicts with the one under the ocean as the race against time from the megalodon is on.

Characters – Admiral King is visiting one of his ships, he is welcomed with open arms, but when the push comes to the shove, he will let people die instead of protecting the men in his fleet. Captain Streeper will do anything to try and save the people of his ship even if it goes against the orders of the Admiral. Commander Lynch is the one that will risk her life to try and save the people on the submarine, she will go against orders to achieve the right thing for people in need of help. Captain Ivanov is the captain of the Russian submarine, he will not give up the secrets of his country despite being put through the questions by the US Navy.

Performances – Michael Madsen is in this film, he was in Reservoir Dogs, how the mighty have fallen, what is this guy thinking. He however is the best of what is a terrible group of acting, which mostly just follows the actors wobbling like a Star Trek Tv Show and putting on generically week accents.

Story – The story is US Navy versus Russian submarine and a megalodon, this is all we see, the Americans trying to kill the creature while the Russians try to escape. Trying to put a boring military angle into a basic monster movie only sucks the life out of everything, we spend more time fighting each other than deal with the megalodon which will eat them with ease. This could well be the most boring monster movie story I have ever seen. There are no redeem aspects in this story.

Action/Horror/Sci-Fi – The action is mostly laughable the shark attacks are a CGI mess, the rest is just shooting guns. The horror is meant to be a monster movie, the fact this is just from watching is being the scariest thing about this. The sci-fi idea about the long thought of dead creature does make sense only for it to be something we see way too often.

Settings – The film is set in a random ocean with military vessel being under attack from the shark.

Special Effects – The effects are the normal terrible CGI rubbish we are used to seeing in the syfy world of movies.

Scene of the Movie – Drunks meet the shark.

That Moment That Annoyed Me – The CGI attacks are beyond laughable.

Final Thoughts – This is easily one of the worst outings that the world of syfy has given us, this is terrible from start to finish and fails to even be a bad monster movie.

Plot: A look at the life of the astronaut, Neil Armstrong, and the legendary space mission that led him to become the first man to walk on the Moon on July 20, 1969.

Tagline – Experience the impossible journey to the Moon.

Story: First Man starts as we see how Neil Armstrong (Gosling) can solve problems in flight with one of his test mission to the limits of the atmosphere going wrong before he saved it, we meet his family wife Janet (Foy) and children Richard and Karen, we see how they suffered a tragic loss of young Karen, which drove him to apply to become an astronaut.

We follow the astronaut training program which showed Neil’s abilities to solve problems even after seeing his friends around him lose their lives to the pursuit of space. We follow up to the legendary mission he will always been known for as he was the first man to walk on the moon.

Characters – These characters are and were real people, Neil Armstrong is always going to be remembered as the first man to walk on the moon, we see how this shy man managed to overcome his own personal tragedies to achieve this as we see how he reacts and deals with everything that gets thrown at him until he made history. Janet is his wife, she also suffers through the tragedies, she will give Neil all the support he needs to make sure he will keep his promises to come home, we mostly watch how she must keep the life for their children normal and calm. Edward Higgins White is one of the fellow astronauts, one that becomes close friends with him through the training and the program, he is the one that will offer a shoulder if Neil ever needed it. We meet many famous names from the astronaut programs each gets there moment, we know Buzz Aldrin was onboard Apollo 11 and of the other big named astronauts we know Jim Lovell from the Apollo 13 mission.

Performances – Ryan Gosling gives us a magnificent performance as the icon of astronauts, he shows us how shy, timid and genius Neil was, never making him a cocky man, this simple performance makes you understand each emotion he is going through. Claire Foy sets away from the small screen to give us a flawless performance as the wife who must remain strong, but dealing with anxiety of the unknown through each mission. The rest of the cast are great through the film, each actor gets to pay the respect to the man they are performing as.

Story – The story here follows Neil Armstrong’s life from 1961 to his moon landing in 1969. We do have plenty of interesting aspects to his life, be it the battle to remain strong after his daughter’s death or the feeling of proving himself worthy of being part of the astronaut program. While these are all wonderful to watch, they do feel like they are being told, like, this is what happened here, then this, then this and so on. It never feels like a smooth story and the movie does make out that Neil was an excellent astronaut, but terrible PR man, he didn’t do anything stupid or risky, he lack charisma that other astronauts had, he was just the right choice for the job. The biggest warning you must have before going in, is that this does follow his life over the space program, yes, we do have parts of the space program and they are the most entertaining parts, but we also follow his life away from this.

Biopic/History – 8 years in the life of the most iconic man to go into space, we see his lowest point in his life, to the crowning achievement, nobody can ever take away from him. The history side of the film shows us the key moments in the space race, if you know the basics you will know these moments.

Settings – The film recreates the settings brilliantly, be it the world around the space race, or the cockpits the astronauts get rammed into with little space for any freedom on these deadly missions.

Special Effects – The effects are mesmerizing, when we are in space we are left stunned by the beauty of the views these men had. The film is also used to make it feel like it is shot for the same time the events took place.

Scene of the Movie – Apollo 11

That Moment That Annoyed Me – Too many close ups.

Final Thoughts – As a space race fan this manages to shed new light on the man who made history, it gave us brilliant performance, effects and shows us there was more behind the man than just the icon. 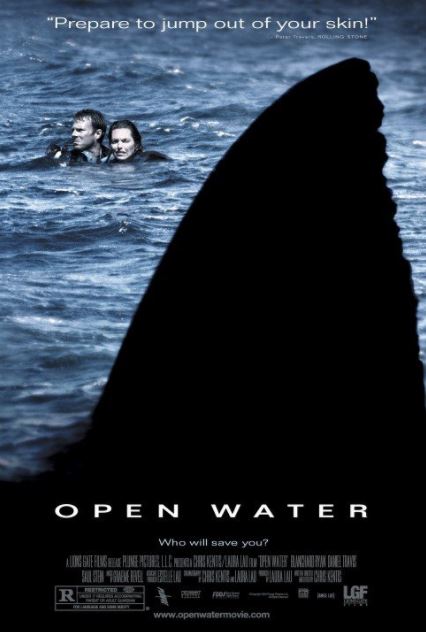 Plot: Based on the true story of two scuba divers accidentally stranded in shark infested waters after their tour boat has left.

Tagline – Who will save you?

Story: Open Water starts as we follow our young couple Susan (Ryan) and Daniel (Travis) who set off for a holiday in the Caribbean, filled with sun, sea and sand. One of their planned activities is a diving trip and heading off in this paradise dive we a healthy amount of people.

Their dream paradise trip takes a turn for the worse when during their dive, a miscalculation by the crew leaves the couple stranded in the ocean. The couple find themselves surrounded by different sea life, starting with jellyfish, but soon turns into hungry sharks, how long can they survive this.

Characters – Susan and Daniel are just your everyday couple looking for a vacation, they have the same arguments and making up moments as you would imagine, even after being left stranded in the ocean, they try to remain calm using their knowledge of documentaries to survive. We must follow them for most of the film, so you will have to get used to their characters.

Performances – Daniel and Blanchard do a good job holding our attention through the film, they must work and not being given the whole over panicking idea does help with their performances.

Story – The story keeps everything simple, a couple head off on a diving trip only to be left behind in the open ocean, we follow as we see if they can survive as they wait for rescue with sharks starting to sense an easy meal. This does everything it needs to with the story, we don’t need to get overly invested in the supporting characters and just focus on the hopelessness the main characters must be feeling.

Adventure/Horror – The adventure takes our characters into the open ocean, the horror comes from being left there waiting for rescue, it is simple but effective.

Settings – The setting is in the title, we have the couple in the middle of the ocean, no clue of direction which adds to the tension being felt through the film.

Scene of the Movie – The first shark appearance.

That Moment That Annoyed Me – the reckless counting system.

Final Thoughts – This is a good thriller, it makes something people could be doing a leisure into a terrifying experience as the couple don’t do anything wrong to be left, they follow the ideas to survive and are left hoping someone could rescue them.