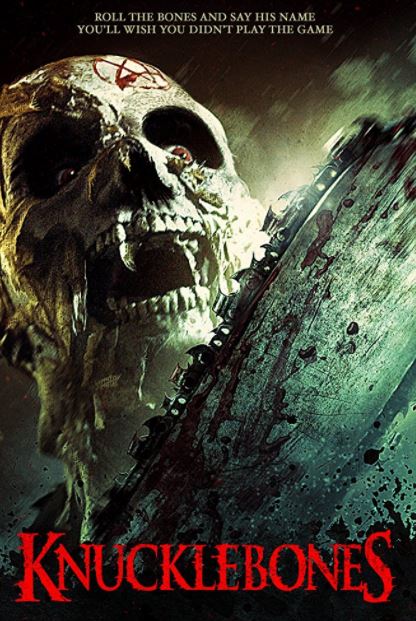 Plot: A group of bored college students unleash a murderous demon while playing a dice game made from human knucklebones.

Story: Knucklebones starts as we see a Nazi experiment go horribly wrong, years later we meet Neesa (Julin) who gets dumped by her boyfriend where she attempts suicide, her best friend Samantha (Bosacki) invites her to hang out at an abandoned building.

In the building, Neesa, Samantha are joined by Kia (Tippins), Adam (Stewart) and Travis (Arnold) as they explore the abandoned building with drinks in tow. When the friends find a dice game they play the games that involves human knucklebones in a hope to summon the demon himself and soon they will race to survive as Knucklebones comes after them all.

Characters – Well characters, this will be short and sweet, Neesa is our leading lady, she has been dumped by her boyfriend and tried to kill herself, to help recover she goes with her friends to get drunk and maybe laid, while summoning demons (as you do) she is against this last part, but must face the consequences. The rest of the groups are generically painful, and you learn nothing of any note about them. Knucklebones is the killer, relentless and unkillable, he will kill everyone.

Performances – The performances are you would imagine are not going to impress in this film, Julin is solid as our leading lady and Tom Zembrod does make for an imposing villain, but the rest, let’s just stay with they weren’t very good at all.

Story – The story is five young adults that while on a drinking night end up releasing a demon and needing to survive to send it back to hell. There isn’t much more to go into here, we have seen it all before and we don’t really care where things go, we even get a random group of four people thrown into the story just for the women to get naked and the characters to be killed, not the most original either. There also doesn’t seem to be many rules to what they can or can’t do even though they play it out like the people can’t leave.

Horror – The horror comes into the film with the killer just butchering the characters with plenty of blood and gore.

Settings – Most of the horror takes place in the abandon building, which is fine and works, but suddenly we can find ourselves outside this location which doesn’t make complete sense.

Special Effects – The gore effects are the highlight of the film, we get plenty of moments of gore heavy which will keep people happy.

Scene of the Movie – Knucklebones entrance.

That Moment That Annoyed Me – We don’t learn anything about the characters.

Final Thoughts – This is a standard but forgettable horror movie, it follows the ABCs of horror not offering us characters we care about. 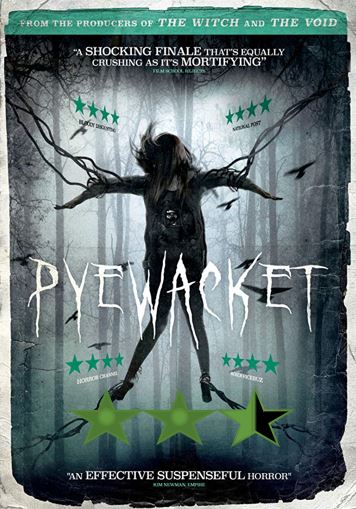 Plot: A frustrated, angst-ridden teenage girl awakens something in the woods when she naively performs an occult ritual to evoke a witch to kill her mother.

Story: Pyewacket starts as we meet the mother Mrs Reyes (Holden) and her daughter Leah (Munoz) who are both struggling with the loss of their husband and father, Leah has turned to the occult for answers while Mrs Reyes has become distant from her daughter, she decides to leave their home because of the memories, forcing Leah to need to travel to and from school for the remain part of the year.

Deciding she wants to get back at her mother, Leah performs a ritual to summon a witch to kill her mother, one that she instantly regrets when she gets haunted by a mysterious figure in the dark.

Characters – Leah is a teenage girl struggling with the death of her father, becoming distant from her mother and wanting to look at the occult. After she is moved away from her friends, she continues to hate her mother which leads her down a dark path against her mother turning to the occult once again for answer, this only fills her with paranoia and fear of just what she has unleashed. Mrs Reyes is the mother of Leah, she is struggling too which is shown with her relationship with Leah, she is trying to keep everything together though. Janice, Aaron and Rob are the friends Leah hangs around though we never see enough of them.

Performances – Nicole Munoz is in the leading role, she is in every scene and is the one we need to see perform, she is great through the film, each decision her character makes we believe her performance throughout. Laurie Holden is the only other star that gets any major screen time and does a good job.

Story – The story here follows a troubled teenager that turns to the occult to help her with her problems only to regret the decision she makes once she gets visited by the unknown. This story tries to address the grieving process that people will go through after losing a family member, we see the extremes someone will turn to and just how difficult the communication can be. When we see the horror side of the story we get to look at how dangerous the occult is and just what it can do to your mind through the increased isolation from friends. This isn’t the most engaging story and does go in the directions you would expect without having that shock moment before the end.

Horror – The horror elements of the film focus on the occult and what you could unleashes when you mess with something you just don’t understand.

Settings – The film starts in a family home location which holds memories, moving to the woods we create the isolation which only adds to the horror in the film.

Special Effects – The effects are not needed too often, the times we need them, they are mixed in quality too. 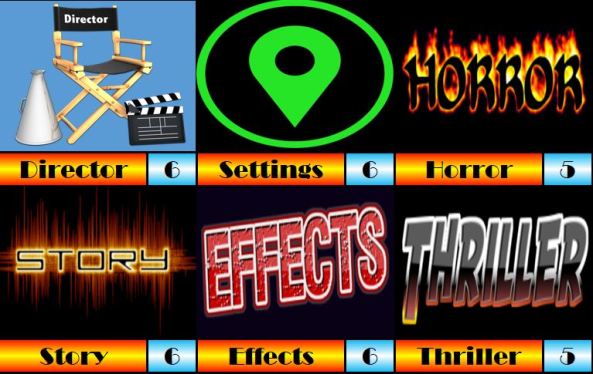 That Moment That Annoyed Me – Not enough focus on anyone else supporting the grieving family.

Final Thoughts – This is a horror that tries to channel real emotions with everything it goes through, it uses the occult to try and balance the grieving process only to miss the point of both sides of this idea. 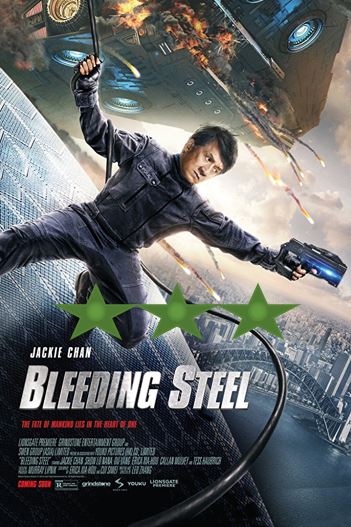 Plot: A special force agent is assigned to protect a scientist and his creation from a sinister gang.

Tagline – One man must unravel the past to save the future.

Story: Bleeding Steel starts as we see special forces agent Lin Dong (Chan) face a difficult decision when it comes to protecting a high-profile witness in protection or having his remaining time with his dying daughter, when the mission goes wrong Lin learns about sinister gang that want this man dead and his invention for their own.

Characters – Lin Dong is a special forces agent who deals in the highest cases in the department, his latest assignment puts his tragic personal life behind him to save a doctor with a secret that could change the world, he faces a losing battle when he comes up against a technological advanced unit. He gives everything and spends his time searching for the group before they do anymore evil in the world. Leeson is the computer tech guy that has uncovered the truth about Nancy, he wants to save her from the danger she has found herself in and must work with Lin even though their styles don’t work together. Nancy is the young woman that becomes the target for all sides, she has her own personal problems with nightmares she can’t explain which is making her life difficult, now she might get to learn the truth. Andre and the Woman in Black are the ones after the device which would make them even more powerful than they are now.

Performances – Jackie Chan is Mr reliable when it comes to action, we know what we can get and that he can handle everything thrown at him, he is easily the star of the show. Show Lo handles the comedy his character offers well though due to the dubbing it is hard to see him shine. This goes for most of the performers in the film they handle most of the material well.

Story – The story does come off confusing in places because it doesn’t go full sci-fi, but it is too sci-fi to not embrace this element of the film. the story does have twists along the way, though they can get telegraphed before being revealed to us. The ideas being put together in the story are interesting though, because seeing a world where science can be used for good in life saving procedures being hunted for by villainous gangs is something we can all believe. This however does feel like Jackie Chan is in a Star Trek movie at times, which only adds to the outlandish ideas in the film.

Action/Sci-Fi – The action when hand to hand is what we come to see and Jackie Chan and the team don’t fail to entertain on this front, it’s the sci-fi shoot outs which do become weak because of the quality of the laser beams being shot with the future weapons.

Special Effects – The effects in the film are not the strongest when it comes to dealing with gun fights, the best parts come from the stunt work in the fight scenes. 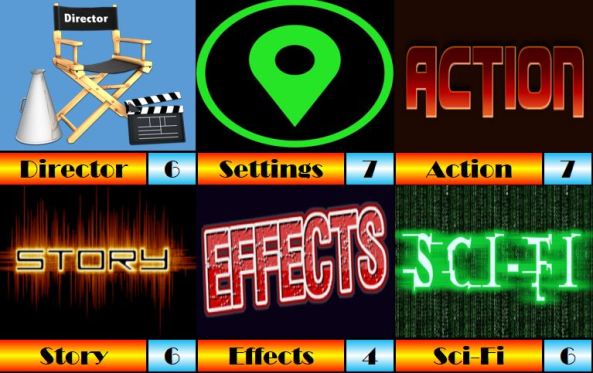 Scene of the Movie – The Sydney Opera House fight.

That Moment That Annoyed Me – The dubbing is really poor.

Final Thoughts – This is an action film you would enjoy watching if you are a Jackie Chan fan, it does keep things simple enough even if they can be wildly over the top at times.