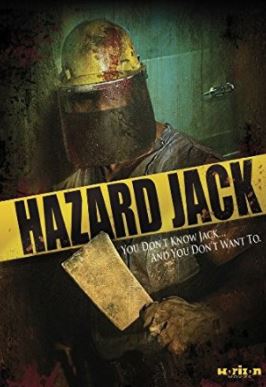 Plot: A group of college kids get together for a weekend of booze and war games at an abandoned hospital. The hospital has become the haven for a PTSD stricken war vet coping and acting upon his delusions. Who will survive the game?

Story: Hazard Jack starts as we follow a large group of college student who locate the abandoned hospital for a weekend booze, sex and wargames, our main characters would be the organiser Earl (Sporman), the new team member Stella (Lani) and the old couple Bridget (Maddox) and Dillon (Gray).

The problem the students will face is the war veteran living in this hospital who is struggling to deal with the consequences of war that he likes to kill anyone that enters into his home. Who will survive the wargames turned deadly.

Characters – Bridget is the one of the group who is least interested in going, she is have relationship troubles with her boyfriend and a easy final girl figure.  Earl is the smartest of the guys who has the location scouted for the best location for wargames. Stella is the newest member of the team which gives us a reason to be told all the characters name in an introduction style. We do have a lot of students I think there are actually 6 just to have sex whose names are forgotten quickly, we also have a gay couple who are painfully generic.

Performances – It would be fair to say none of the actors in this movie get enough time to perform anywhere near their best, we have a good selection of actors here just to get naked too.

Story – Kids go to abandoned location for booze and sex weekend and end up being picked off by a crazed serial killer, been here seen this, it does work but we needed less characters to focus on so we could focus on so we can care about the ones who are still alive. This isn’t the strongest of the gorefest storylines.

Horror – The horror is all blood and gore as we follow the villain butchering the students.

Settings – The abandoned hospital does make for a good setting because the characters don’t have anywhere to run and can party as loud as they like.

Special Effects – The effects are good blood filled effects but away from that nothing is overly impressive.

Scene of the Movie – End credits were good.

That Moment That Annoyed Me – Too many characters.

Final Thoughts – This is a simple blood splatter movie which spends too much time on boobs than kills.