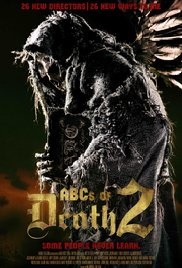 Plot: Another 26-chapter anthology that showcases death in all its vicious wonder and brutal beauty.

Verdict: A Lot of Fun

Favourite Letters – A – Amateur I liked this because it pokes fun at the slick nature people believe hitmen going through vents can be showing the truth about what you will find.
D – Deloused this is a delightfully twists animated tale that is everything from disturbing to disgusting.
L – Legacy, I liked this one because it is bold, bloody and entertaining.
N – Nexus, this is a well built up moment where we follow all the people involved before the final moment.
O – Ochlocracy, this short gives us a fresh look at the zombie genre.
S – Split, this is a story that could be run of the mill but clearly has the best twist of any of the short stories here.
T- Torture Porn, this is one that went in a direction you didn’t see coming which adds shock value to it.
U – Utopia, this sums up modern society nicely for shocking effect.
Y – Youth, this is plain weird but also feels heart breaking throughout the story.
Z – Zygote, well this is a short story that is seriously twisted and delightful ending to these horror tales.

Hardest to Watch – H – Head Games, I think this is because it is bigger than expected because you could read into it the most.
K – Knell, I have this one here because I didn’t understand the end it at all.

Biggest Disappointments – B – Badger, most because this felt like there was still five minutes to go which could have been the blood bath we got teased for.
I – Invincible, this is here much like B as it is a film you would like to have seen more from.

Ones That I Would Like to See a Full Feature – F – Falling, this story feels like it could be a brilliant thriller that over a 90 minute could build characters up nicely for the climax.
Q – Questionnaire, this is an interesting one and could be turned into a very interesting horror film.

That Moment That Annoyed Me – V – Vacation, one because it is shot badly and two because the guys assholes.

Final Thoughts – In all fairness this has a lot of good chapters which are fun, bloody, gore and everything you like, if you like short horror stories go and enjoy. 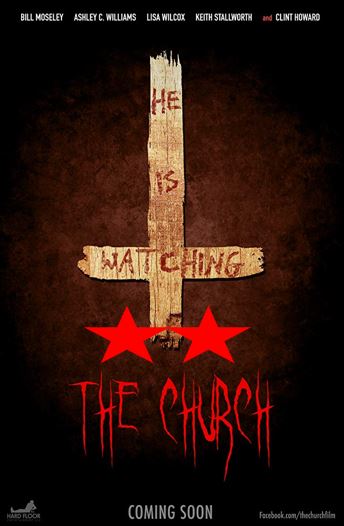 Plot: After a Pastor and select members of his congregation agree to sell his family’s 100-year-old church to a local developer, their sins begin to manifest in front of their eyes and hell breaks loose…inside the church.

Tagline – He is Watching

Story: The Church starts when real estate agent Ronald Lawson (Nadu) are trying to get a deal done purchasing a church from Pastor James (Moseley) to turn the church into the latest development for his company.

With the papers signed both sides find themselves trapped inside the church being tormented by an unseen force that isn’t happy the church is being sold.

Thoughts on The Church

Characters – Pastor James runs the church, he wants to be loyal to the followers, only he is seeing the numbers dwindle and his only option is to sale the church to the investor. Ronald Lawson wants to impress his father by being the one to get the deal done when it comes to buying the church, he finds a way, but his own personal problems cause him to be haunted by what is in the church. Elizabeth is the assistant to Roland who can help get a deal done, the rest of the characters we meet are different people who work for Roland, who are part of the deal from the developer’s side and members of the board in the church.

Performances – Bill Moseley is the horror icon that we know, he often appears in horror movies in support or cameo roles, here we do get to see him through the whole film which is good to see. Matthew Nadu takes the lead role and does a solid enough job. The film does get slightly saturated with too many characters which stops anyone becoming the main attraction of the film.

Story – The story here follows a development group that wants to purchase a church and after a sale is agreed things turn sinister when an evil in the church refuses to let the people leave the church. This does ask us the question about whether a church should be sold to be demolished for developmental purposes, which is the highlight of the story. the story ends up being split into two, first half is showing us how the characters are thinking about the deal and the second is all the scares. Inside the church the hauntings don’t seem to completely explain or explained in anyway, just randomly occurrences. We do get too many characters meaning anything that does happen to any of the characters we don’t get enough time to process what happen either. The story has potential, but only turns into a quick bump and scare with an ending which will leave you rolling your eyes.

Horror – The horror we experience in the film is basic, the positive come from the fact we do see the events happen in a group rather than solo moments being picked off, this can be scary but doesn’t feel scary.

Settings – Once we are in the locked church the setting for the film works, we rarely see hauntings from inside a church, which is could be considered one of the smartest moves this movie makes.

Special Effects – The effects are a mixed bag, because they are consistent when it comes to how the disappearance happen, but certain elements later in the film come off weak. 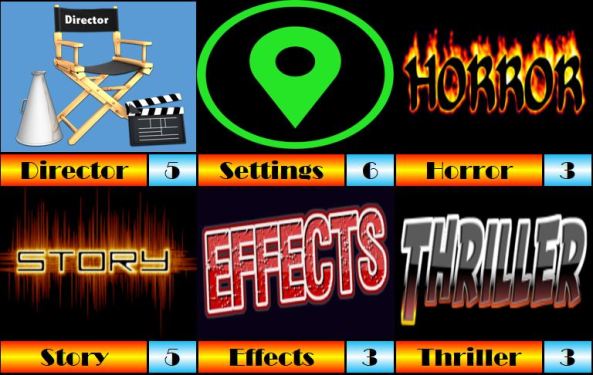 Scene of the Movie – The first person taken.

That Moment That Annoyed Me – Too many characters.

Final Thoughts – This is a simple horror film, it does the basics well without doing anything that will make us go and scream. We have a good idea that doesn’t get executed to the best levels. 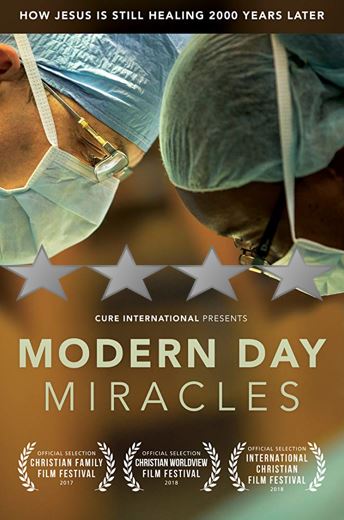 Plot: Three children with correctable disabilities, living in the Dominican Republic, Niger and the Philippines, find healing in hospitals of CURE International

Verdict: Wonderful Look at the Good in the World

Story: Modern Day Miracles starts as we learn about CURE, a charity that has doctors mostly in Africa as well as the Philippines who are helping sick children get the surgery they require after suffering injuries that never healed medically.

In this film we follow three stories, one in Dominican Republic, one in Niger and one in the Philippines, we get to see how the team operate with the communicating and rehab process which will be long. They use the power of belief in God to help remain positive through the problems they are suffering from.

Final Thoughts – We need to look at this documentary in two different directions, first we should praise the work the charity workers are doing for the children who don’t get the medical support in the small villages they are living in, this documentary shows how obstacles including language barriers and home grown beliefs about people of different races. We see how committed the team is to make this happen. On the other side of the documentary comes the religious side of CURE, where the people working use their belief in God to bring a spiritual happiness to the patients to make their time at the medical centres more comfortable. While I personally have no belief in any form of religion, seeing how giving the patients extra hope and smiles using it, shows how important it can be for somebody who is suffering. This is a documentary that should be watched by anyone that wants to see the good being done in the world and one that gives you hope about the people in it.

Overall: Documentary that gives us all hope. 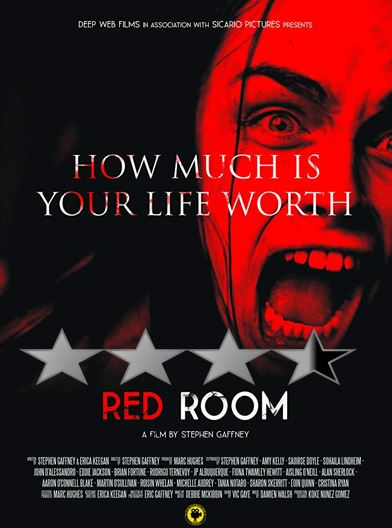 Tagline – How Much Is Your Life Worth

Verdict: Rawer and Grittier than Hostel

Story: Red Room starts when Kyra (Kelly) becomes the latest woman to be abducted from the streets, taking to a remote house and locked away with two other women Alison (Doyle) and Lilly (Lindheim) with their captor Richard (Dalessandro) running the operation from the house.

Locked in a room with the screams echoing around the house, Kyra must look to help guide the other girls escape from a horror they can only imagine in a twisted world,

Characters – Kyra is our main character, we see her get taken and see flashbacks to her life before she was taken, she tries to figure out how to escape the room, she is bar far the strongest character in the film. when we start getting into the other two girls, Alison and Lilly, they are just captured girl one and two, not feeling as in distress as they could be or even considering escaping, it seems to be Kyra that inspires them. Richard is the man controlling the operations in the house in communication with the boss, he doesn’t seem to get involved in the action, we have the colourful characters involved in the seedy underworld we have entered too.

Performances – Amy Kelly is our leading lady and she is the best part of the movie, you believe her struggle to escape the most. Everyone else in the film is good without doing anything that makes them stand out on another level from the rest.

Story – The story here follows three women that are being held captive in a room in the middle of nowhere. They must wait to see their fates or look for escape. The women don’t know what is happening, we do, all the women hear are the screams of the previous victims. We see how the sadistic captors are conducting a business which will satisfy the twisted in the world. The story will test the audience because this isn’t going to be for a faint hearted and shows us just how one of the movies that circles around this type of business and how everybody involved operates.

Horror – The horror comes from happens to the women, it is brutal and difficult to watch, you may even need to look away at times.

Settings – The film is mostly set in the one house, this is isolated which means even if the women do get out of the house they will not know where to go.

Special Effects – The effects are practical which makes certain scenes even harder to watch, the team behind these does deserve extra praise too. 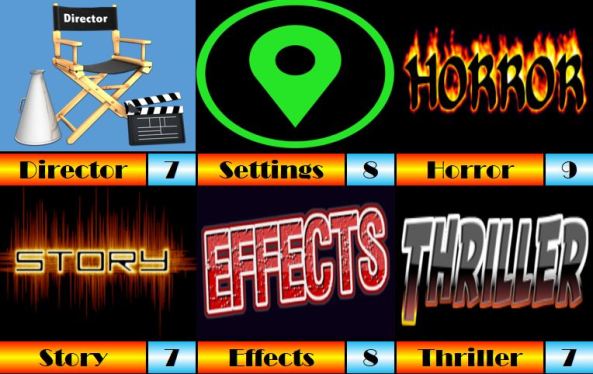 Scene of the Movie – The night escape.

That Moment That Annoyed Me – The other two women seem to have just accepted their fate.

Final Thoughts – This is one of the most brutal, raw and gritty movies you will ever see, it does end up making Hostel looking tame too.