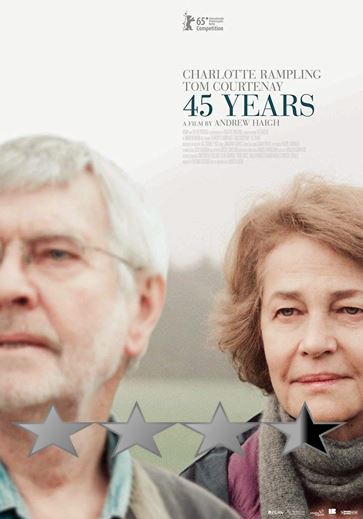 Plot: A married couple preparing to celebrate their wedding anniversary receives shattering news that promises to forever change the course of their lives.

Tagline – Do we really know our loved ones?

Story: 45 Years starts as we meet the Mercer’s, Kate (Rampling) Geoff (Courtenay) a married couple preparing for their 45th wedding anniversary, Kate does most of the planning and does extra caring for Geoff because of his memory starting to go. They are respected through the whole town with most of the people looking forward to the party.

When Geoff starts remembering the story of a woman he met before Kate, it puts Kate’s feelings in a frenzy and she wants to learn where she really stands in his life after all these years.

Characters – Kate is the former teacher (I think) who has been married for 45 years in what she believed was a perfect marriage, until she learns about a woman before they met, she goes through the questions of just where she stands in his life, even after all these years. Geoff is her husband, his memory isn’t what it used to be and it is his memory of his former love that puts the story on the rocks. Everyone else we meet are people from the town, friends who have known them for years.

Performances – Charlotte Rampling got an Oscar nomination for this role, you can see why she is fantastic as we see how she must try to hold in her emotions through the struggle. Tom Courtenay is also fantastic as the elderly man that can’t keep everything together like he once did. The rest of the cast doesn’t get too much screen time which is fine because it is our couple story.

Story – The story follows a couple of soon to be 45 years preparing for their anniversary, only for a moment to throw the years or marriage out the window through the eyes of one of the couple. We only follow the week leading up to the event which is great because we know how happy their marriage was before the events. It shows how one moment could change how everything seems which is reality many people would have in life and it also shows how important love can be for a couple even if at times things could be questioned.

Romance – The romance in this film shows just what the two would have been through with the years of marriage, how they must learn to stay loyal to each other no matter what.

Settings – The film keeps us in the singular town setting, it gives the film an authentic feeling of just where the couple have been for years and never look out of place here.

That Moment That Annoyed Me – It is never fully explained is Geoff is just getting old or ill with his memory issues.

Final Thoughts – This is one of those dramas you can see why it got the Oscars attention, but it won’t be something for the casual film fans to be going to watch and it does show how a real long-term relationship goes.

Overall: True to how love is.