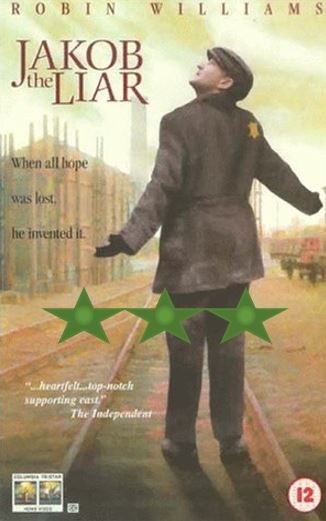 Plot: In 1944 Poland, a Jewish shop keeper named Jakob is summoned to ghetto headquarters after being caught out near curfew. While waiting for the German Kommondant, Jakob overhears a German radio broadcast about Russian troop movements. Returned to the ghetto, the shopkeeper shares his information with a friend and then rumors fly that there is a secret radio within the ghetto. Jakob uses the chance to spread hope throughout the ghetto by continuing to tell favorable tales of information from “his secret radio.” Jakob, however, has a real secret in that he is hiding a young Jewish girl who escaped from a camp transport train. A rather uplifting and slightly humorous film about World War II Jewish Ghetto life.

Tagline –  He will make you believe.

Verdict: Strong, but Not Impactful Enough

Story: Jakob the Liar starts in Poland and the Jewish ghetto during World War II, Jakob (Williams) a pancake salesman is trying to avoid the curfew and while being accused of failing to follow the instruction he over hears the radio announcing the Russians are coming, he saves a young girl Lina (Gordon) the world spreads around the ghetto that the Russians are coming with Jakob giving them hope.

As the stories continue to grow Jakob learns he can no longer tell the truth because it will only leave the people with no hope and if he continues his lies he will give them false hope which might put the lives of fellow residents at risk.

Thoughts on Jakob the Liar

Characters – Jakob is one of the Jews confined the ghettos in Poland during World War II, he keeps his head down with his connection, until one day he makes the story up of hearing the Russians are coming which lifts the moral in the ghetto, only for everyone there wanting to listen to his radio, the one he doesn’t have, but he can’t tell the truth because it will bring back the suicides in the ghetto. The rest of the character we meet are the residents of the ghetto and a young girl Lina that has escaped the transport trains, they all see hope in Jakob’s stories.

Performances – Robin Williams in the leading role does nail the accent, get his moments of humour and heart, but sadly it is hard to take the film seriously when you are waiting for a laugh even for the sensitive subject. The rest of the cast are good even if we are turning to Robin slightly too much through the film.

Story – The story is a difficult one to watch with a humorous tone because it was a horrendous time in history, we know what happened to the Jews and how they were forced to live. Now saying this, how the Jews were given hope from the stories of Jakob does help the hellish life they were living through, but watching things get out of control does play into the what makes the story interesting to watch. This is a story that doesn’t balance the sensitive subject very well though which disappoints.

War – The film is set in the war time, we get to see the conditions Jews were forced to live through for the most part, but not the conflict.

Settings – The settings do make us believe we are there with the victims of the time which can be hard to watch like always. 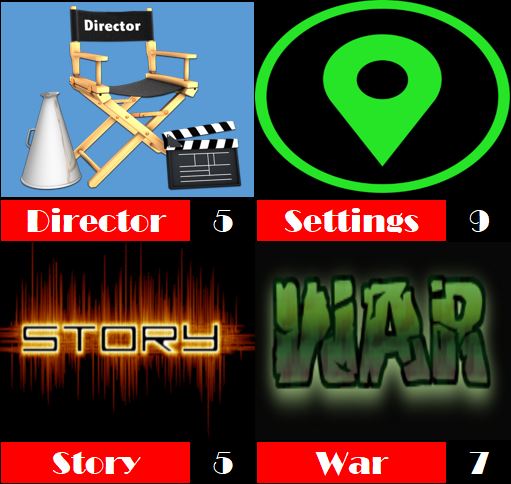 Scene of the Movie – Battling what to do.

That Moment That Annoyed Me – It is too humorous in places.

Final Thoughts – This is an interesting idea for the how Jews would try to improve moral in a difficult time, but end sup being too humorous for the subject matter.

Overall: Not on the leave of the best holocaust movies. 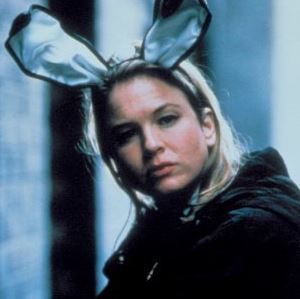 Why I’ve Picked this choice – Miss Zellweger stepped into the role of Bridget Jones for the first time in 2001 she went on to play the role three times in total and this a trilogy I have never seen, this point of including it is simple, this is the promise to one day go and watch all three and learn to apricate the trilogy for what it is. I have never read the books and that simply won’t be happening, but the movies will become part of a future weekend franchise.

Plot: A suicidal businessman is visited by an inter-dimensional being who appears in the form of a beautiful woman.

Tagline – Have we always existed?

Story: The Bestowal starts with businessman Steven (Brittan) about to kill himself, with the trigger ready to pull, he gets visited by Death (Bhattacharya) who claims to visit everybody in the universe that has attempted or is planning suicide in a last-ditch attempt to learn the problems.

As the conversation flows we learn about Steven’s life how things in his life have question religion and his success in an attempt to save him for a better position in his life.

Thoughts on The Bestowal

Characters – Steven is a successful businessman that has more money than he could need and everything a man could want, except a family, he is on the verge of suicide until he meets Death. He argues his case to go through with the suicide before making his decision for what he wants to do. Death is a celestial being that visits people on the verge of suicide, these visits are meant to help the people whose souls will become lost, they appear in different forms this time it appears as a beautiful woman, offering the friendship and conversation Steven requires, reflecting the problems he has face and questioned in life.

Performances – Sam Brittan and Sharmita Bhattacharya are the only two actors in the film, they spend the whole film in conversation, the two show how exceptional chemistry in their conversation keeping us engaged in what is being discussed, because if they don’t perform we could find ourselves getting bored. 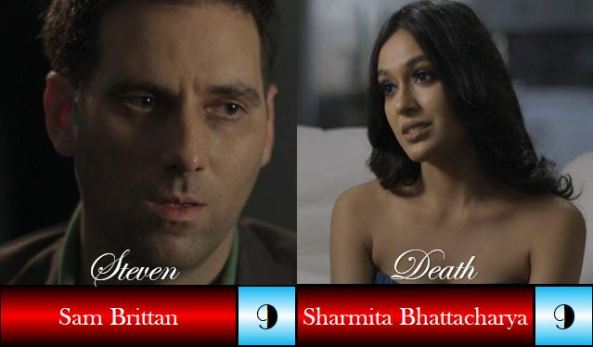 Story – The story here follows on man about to commit suicide who gets visited by Death who offers him reasons to re-evaluate this decision. This is a conversation movie, this is one story that keeps us involved in this conversation, giving us a reflection to what are problems in everyday life, study factors in life that look at depression which could bring someone to the verge of suicide. The story will make you think about your own life and just what you are achieving from it, this brings us to the thought provoking side to the story, something many movies don’t give us. Be prepared to feel emotions you don’t want to be feeling for the start of the movie because we start very dark when it comes to the depression and suicide part of the conversation.

Fantasy/Sci-Fi – The fantasy side of this story comes from how the conversation can come together mixing well with the idea of celestial beings that could come to visit people in their time of need.

Settings – The film keeps the settings inside a house, this keeps us in a realistic location for a conversation that is needed for Steven.

Scene of the Movie – The conversation is so interesting to see.

That Moment That Annoyed Me – Nothing.

Final Thoughts – This is one of the movies that will make you think about life decision, question your own place in life and make you believe there will always be more.