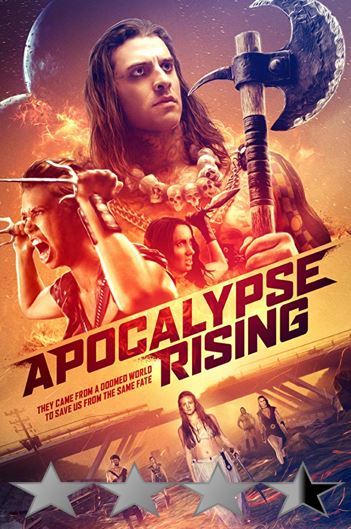 Plot: They came from a doomed world to save us from the same fate.

Story: Apocalypse Rising starts as we head to the planet Rathe on the brink of collapse through war. Mia (Parker), Magnum (Samples), Karl (Frey), Phoenix (Lebrun), Beset (Rae) and Thora (Steadman) escape the planet searching for a new home, Earth.

On Earth they must learn the new culture and teach the wars that war will be destructive, but a new threat for both appears, they must join forces to fight for freedom against the undead.

Characters – Mia is the one from the crew with the ability to see the future, once leaving Rathe, she is the only one that sees the future coming to Earth which will follow in the footsteps of their own. She does have an air of innocence about her which helps her stand out from the rest of the species. Magnum is the muscles that will help in any fight, be objectified by the women of Earth and show he has the brains to. Phoenix is the pilot of the crew, he fills the role of the one that gets the extra laughs while trying to keep the group together. The crew is rounded off nicely with each one knowing their place in the world, with the aliens not understand Earth, when it comes to the human characters we get the wonderfully named India Jones one of the scientists on the dig.

Performances – Hunter Parker in the leading role shows the innocent strength needed for this role. Shane Samples will be the one you remember most, he is built like a tank and his ability to hit the humour lines with complete deadpan reaction makes his character feel different to one with the same look. The rest of the cast do a good job and fully embrace the characters mentality.

Story – The story here follows a group of aliens that flee their dying home planet and find themselves on Earth needing to prepare the planet for the same destruction their own planet faced. The story is completely self-aware of what it is saying which does help, we get to play on the idea that humans aren’t as smart as them, being in the same tone as an Army of Darkness from start to finish. We do dive into religious history while searching for how the impending destruction can be translated from biblical text. The story could have become laughable if we didn’t have the self-aware side behind everything.

Comedy/Fantasy/Horror/Sci-Fi – The comedy in the film does come from how the alien interact with the humans, with certain reactions being over the top. The fantasy world puts us in the horror idea of zombies mixed with religion. With the sci-fi elements of the film coming from the world where aliens have come from their own planet to help Earth to not make the same mistakes.

Settings – The film keeps the settings simple, we have Rathe which looks like our generic planet, with the Earth settings surrounding a dig, which helps with the religious side of things.

Special Effects – The effects are low budget and we can tell, it doesn’t take away from the film.

Scene of the Movie – The self-awareness this movie shows.

That Moment That Annoyed Me – Would like to know more about the side characters.

Final Thoughts –This is one of the most self-aware movies you will ever see, it gets the laughs when needing and never takes itself too seriously. 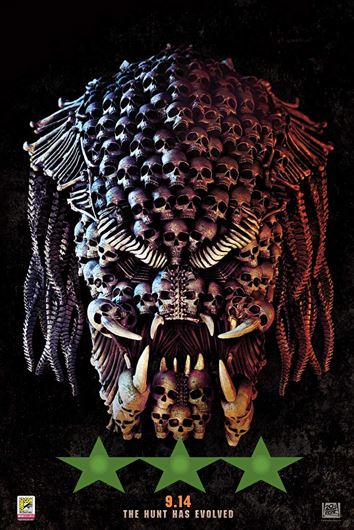 Plot: When a young boy accidentally triggers the universe’s most lethal hunters’ return to Earth, only a ragtag crew of ex-soldiers and a disgruntled science teacher can prevent the end of the human race.

Story: The Predator starts as we meet elite sniper Quinn McKenna (Holbrook) whose latest job sees a spacecraft crash land with a Predator butchering his team, with a few goodies he finds, he sends home, knowing what is coming. With his son Rory (Tremblay) being an Asperger’s sufferer, he accidently unlocks the code trapped within the system.

Government agent Traeger (Brown) is trying to unlock the system and when the captured Predator escapes, Quinn must team up with other soldiers branded crazy, Nebraska (Rhodes), Coyle (Key), Baxley (Jane), Lynch (Allen) and Nettles (Aguilera) who help scientist Casey (Munn) find a solution for the new Predator problem.

Thoughts on The Predator

Characters – Quinn McKenna is a sniper who finds himself in the middle of the latest Predator ship crash landing, surviving his first encounter with the creature, he uses the technology to escape, he must use his training to protect his son and save the world from the impending attack. We do know he isn’t the best family man, but this night should bring him closer to his son. Nebraska is one of the ‘crazy’ soldiers, he will help Quinn becoming the connection between the rest pushing them to do the right thing. Rory is the Asperger’s sufferer that can solve puzzles others can barely unpack, he is your typical different student and school, the outsider if you like. Casey is the scientist bought in to help understand just what is happening with the Predator’s visiting Earth and certain questions about their DNA. Traeger is the government that is trying to keep the lid on everything, he will kill anyone that cross the government to keep secrets and has a dark sense of humour. The rest of the soldiers, Coyle, Baxley, Lynch and Nettles do have their own problems from serving in the military with this battle giving them a chance to redeem themselves.

Performances – Boyd Holbrook in the leading role is good for the film, he doesn’t reach the levels of Arnie and will fit in well with the rest of the leads. Trevante Rhodes is the guy you most want to watch, he gets the best scenes for the military unit. Jacob Tremblay is getting a reputation for playing kids with troubled sides, he seems to be excellent at this type of role, this however would be his weakest outing so far. Olivia Munn is good even though she doesn’t get the best scenes to work with. Sterling K Brown makes for a great fun human villain and the rest of the unit show good chemistry.

Story – The story here follows another group of soldiers that come face to face with a Predator and must fight back to survive, this time we have a bigger, badder Predator. Now is a fun story to watch, however if you are a fan of the original this will not give you everything you want to see. The biggest plus in this movie is explaining why the Predators visit Earth, watching this is the right move for the franchise. The story does show insensitive when it comes to dealing with the military unit that clearly have their own mental health problems which sadly gets overlooked and turned into a running joke. For a man of Shane Black’s calibre, we would expect better written scenes, instead of just lazy insults. The key element to take away from the story is that we are watching something fun that has moved away from the original tone.

Action/Adventure/Horror/Sci-Fi – The action is big, we get the fights which are big and bloody which is all we want to see, the horror does take a back burner as even when the film tries to be suspenseful it falls short, but the blood does help us out here. The sci-fi side of the film comes from trying to build a bigger world for the Predators to visit from.

Settings – The film doesn’t make use of the settings too, we get the woodland area which plays into Predators speciality.

Special Effects – The effects here are very weak for the budget, the opening sequence alone is poor for what we would expect, when it comes to the camouflage ability doesn’t even look better than the 87 film.

That Moment That Annoyed Me – Making a joke of the mental health problems soldiers face.

Final Thoughts – This is a fun sequel, the tone does stay the same from start to finish which other big blockbusters have failed to do, we get to see more about the history of Predators and most importantly we learn just how deadly they can be. 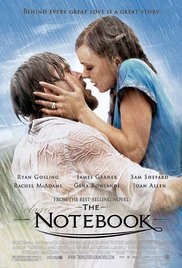 Plot: A poor yet passionate young man falls in love with a rich young woman, giving her a sense of freedom, but they are soon separated because of their social differences.

Story: The Notebook starts as Duke (Garner) a positive thinking elderly man is getting ready to continue a story to Miss Hamilton (Rowlands) at the home, this story takes us back to Noah (Gosling) who meets the 17-year-old Allie (McAdams), both from different backgrounds, Noah poor and Allie rich.

When the two fall wildly in love Allie’s parent’s don’t want her to spend her life with what they call trash, leading to a break-up of the loving couple. Years fly by the two live their own lives away from each other where Allie falls in love with a man her family approve off. While the two cross paths again the love they felt will always be there, but life always gets in the way.

Thoughts on The Notebook

Characters – Noah came from the wrong side of town, the side with no money or prospects, he earns everything he has to prove that he can escape this world, he makes it through war but his love for Allie will never stop being there. Allie comes from the rich part of town, she accepts Noah for being different but her parents stop her from following the true love she felt for him, while she does fall in love with another man she will always have that flame for Noah. Duke is the man telling us the story to Miss Hamilton who is listening to the story, we learn that they are a bigger part of the story too.

Performance – Gosling and McAdams both shine in these roles which will always be considered two of their more popular roles of their careers. James Garner and Gena Rowlands are both great in the older roles too.

Story – The story focuses on two people who fell in love, they face stumbling blocks along the way be it personal or otherwise but the love they feel will be what no other can give them. We do flash between the story unfolding as it is being told that does give us hints to who the elder characters are which at times can be frustrating because the final reveal is the one that plays on the heart strings. This is a fairy tale love story, which the likely hood of every happening seems unlikely, but it gives the audience hope of true love.

Romance – The romance in this film does show how two people can fall in love and it last forever even through illness, war and everyday situations.

Scene of the Movie – Swans and rain.

That Moment That Annoyed Me – I think they give away a twist too early.

Final Thoughts – This is one of the all time most popular date night movies, you can see why because it does work on the love side of things.

Overall: This is a bitter sweet love story that plays for tears.