Plot: An elite ‘search and rescue’ team transport onto an off-world mining-facility to rescue Whit Carmichael, the lone survivor of a biological outbreak.

Tagline – Out here their greatest threat is each other.

Story: Infini starts when a off-world mining facility goes offline, with precious cargo there a search and rescue team are sent to retrieve any survivors and stop the contagion getting any worse. Whit Carmichael (MacPherson) is believed to be the only survivor and with his help the team plans to close operation completely.

The problems come from how the infected people have become ravenous and any contact with the blood or skin will lead to infection. When the infection continues to spread the team gets scattered and the race to survive is on.

Characters – Whit Carmichael is the lone survivor on a mining off-world outpost, he has hidden to stay away from the infection spreading and now is the only one that can stop the system from causing problems on other worlds. We do have the search and rescue team which are the basic figures we know from the genre, none of them stand out or do anything memorable as they all seem to get infected and crazed.

Performances – The performances, well this isn’t going to be the most positive part of this review, Daniel MacPherson takes the lead role and struggles to give us the impact his character needs, we also don’t get the best from most of the other actors because their characters are written so weakly.

Story – If you have seen Doom, you kind of know the story here, search and rescue team think they are doing a routine job only to learn the mining community has been dealing with something they could never imagine fighting. It follows the direction you expect and the characterless characters make you just not care where things go or who lives or dies.

Horror/Sci-Fi – The movie does try to have horror elements, but it goes for gore over the idea of anything being scary only to pull away before showing anything, the sci-fi side of the film looks at the idea that we would discover unknown threats on unknown worlds which would come off for the most part, only we decide to create the idea that we need to hold back on technology.

Settings – Th film is set on an abandoned mining community on another planet, we never see the outside, so it could be any sort of community of off-world people could even be on Earth, if we are honest.

Special Effects – We have good looks at the aftermath of the effects, but for the most part we get nothing new added here. 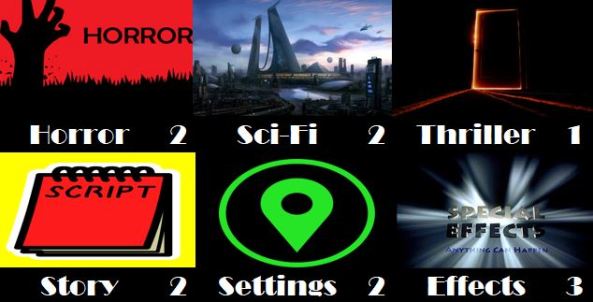 Scene of the Movie – The shot that changes everything.

Final Thoughts – Most of the movie does nothing new, for the most part and then suddenly throws us a twist that hasn’t fitted the tone of anything we have seen in the movie before.

Overall: This feels like a proper Doom rip off.