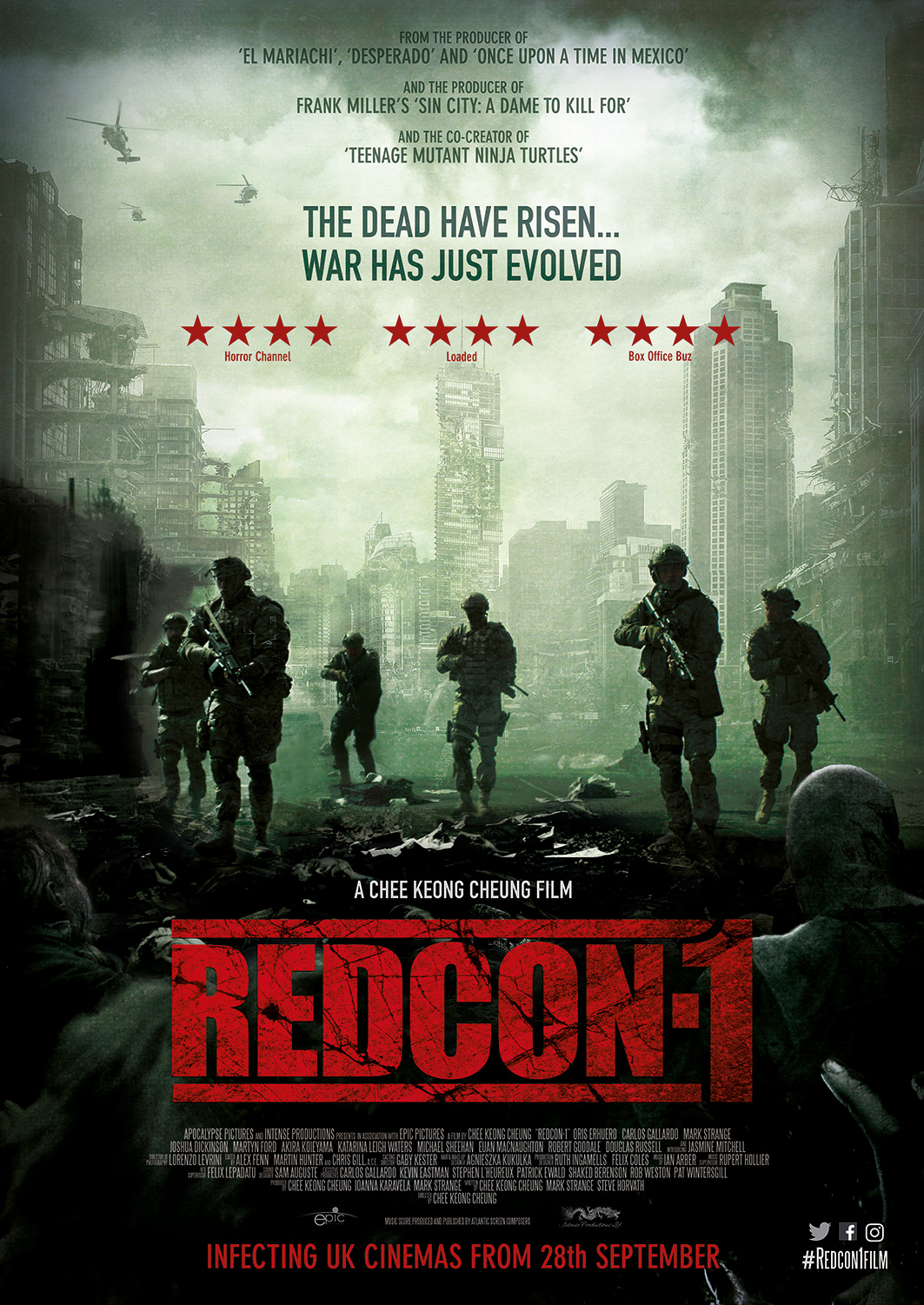 “A fast-paced, action packed zombie epic unlike any other” Loaded

Synopsis
After a zombie apocalypse spreads from a London prison, the UK is brought to its knees. The spread of the virus is temporarily contained but, without a cure, it’s only a matter of time before it breaks its boundaries and the biggest problem of all… any zombies with combat skills are now enhanced.

With the South East of England quarantined from the rest of the world using fortified borders, intelligence finds that the scientist responsible for the outbreak is alive and well in London. With his recovery being the only hope of a cure, a squad of eight Special Forces soldiers is sent on a suicide mission to the city, now ruled by the undead, with a single task: get him out alive within 72 hours by any means necessary. What emerges is an unlikely pairing on a course to save humanity against ever-rising odds.

Get your tickets from the 10th August Here

For more information check out the Facebook Page Here

Plot: The Russians scrap a dangerous scientific project designed to change the course of history. A manhunt ensues after they unsuccessfully attempt to exterminate all the scientists involved in the top secret project.

Story: The Bunker: Project 12 starts as we learn about three scientists that escaped a secret Sovient Union experiment, now in the modern time Tabeel (Sanchez) leads a team including Irina (Alam), Alan (Corvillo) and other are hired by business tycoon Henderson (Roberts) to locate Brian Balanowsky (Cosmo) one of those scientists for a secret experiment of their own.

As Brian guides the team through the bunker for the research, he must face the past while revealing the secrets that will end up trying to eliminate the team.

Thoughts on The Bunker: Project 12

Characters – Brian Balanowsky is a former Russian scientist, gone into hiding after the projects were closed down, when he is located years later, he is forced to guide a team into the bunkers to bring out his research. He is a reluctant scientist who knows what he created was wrong. Tabeel is the leader of the team, he keeps the team in line refusing to let them cross the line and risk each other’s lives. Irina is another member of the team, she starts out strong just like the rest of the team, but soon she just becomes another one running for safety. Henderson is the man funding the search, he does have his own reasons for being involved.

Performances – In the performances we get a couple of big names in James Cosmo and Eric Roberts who are both reliable for any project and this is no different. It is the members of the team that are looking to make an impact with Joaquin Sanchez doing well as the leader of the team. The rest of the team does feel interchangeable with nobody standing out from the crowd.

Story – The story of secret experiments from different countries is always going to be able to create an interesting motivation in a story, in this one we see what the Russians had been working on during the Cold War with a team entering one of the abandoned bunkers in search of the research. This plays out how you would imagine with the team being able to tackle the situation only to realize that things are much deadlier than they could imagine. You can see the comparisons to ‘Outpost’ as that movie gave us an experiment that left a team facing the odds to survive. If you are going to be looking for anything overly fresh from a story, you will be disappointed and the extra added twists feel forced more than anything.

Action/Sci-Fi – The action in the film comes from the big shoot outs between the team and what is in the bunker, the weapons become bigger as the film unfolds, the sci-fi side of the film shows us just how certain experiments would have been going on during the Cold War.

Settings – Once we hit the bunker we have a nice contained location which only has one way in or out, this does help us feel like the battle for life or death is more realistic.

Special Effects – The effects are solid enough, the creations look good with the only weakness in them coming from their eyes.

Scene of the Movie – The first introduction of the creation.

That Moment That Annoyed Me – The extra twist is too much.

Final Thoughts – This is an interesting action sci-fi film that does borrow from certain other movies, anything to do with the secret experiments is always entertaining to watch.

Plot: An elite ‘search and rescue’ team transport onto an off-world mining-facility to rescue Whit Carmichael, the lone survivor of a biological outbreak.

Tagline – Out here their greatest threat is each other.

Story: Infini starts when a off-world mining facility goes offline, with precious cargo there a search and rescue team are sent to retrieve any survivors and stop the contagion getting any worse. Whit Carmichael (MacPherson) is believed to be the only survivor and with his help the team plans to close operation completely.

The problems come from how the infected people have become ravenous and any contact with the blood or skin will lead to infection. When the infection continues to spread the team gets scattered and the race to survive is on.

Characters – Whit Carmichael is the lone survivor on a mining off-world outpost, he has hidden to stay away from the infection spreading and now is the only one that can stop the system from causing problems on other worlds. We do have the search and rescue team which are the basic figures we know from the genre, none of them stand out or do anything memorable as they all seem to get infected and crazed.

Performances – The performances, well this isn’t going to be the most positive part of this review, Daniel MacPherson takes the lead role and struggles to give us the impact his character needs, we also don’t get the best from most of the other actors because their characters are written so weakly.

Story – If you have seen Doom, you kind of know the story here, search and rescue team think they are doing a routine job only to learn the mining community has been dealing with something they could never imagine fighting. It follows the direction you expect and the characterless characters make you just not care where things go or who lives or dies.

Horror/Sci-Fi – The movie does try to have horror elements, but it goes for gore over the idea of anything being scary only to pull away before showing anything, the sci-fi side of the film looks at the idea that we would discover unknown threats on unknown worlds which would come off for the most part, only we decide to create the idea that we need to hold back on technology.

Settings – Th film is set on an abandoned mining community on another planet, we never see the outside, so it could be any sort of community of off-world people could even be on Earth, if we are honest.

Special Effects – We have good looks at the aftermath of the effects, but for the most part we get nothing new added here.

Scene of the Movie – The shot that changes everything.

Final Thoughts – Most of the movie does nothing new, for the most part and then suddenly throws us a twist that hasn’t fitted the tone of anything we have seen in the movie before.

Overall: This feels like a proper Doom rip off.