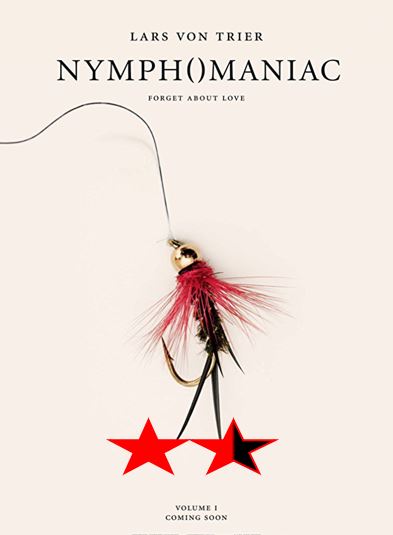 Story: Nymphomaniac Vol 1 starts as a beaten Joe (Gainsbourg) is rescued by Seligman (Skarsgard) taken back to his home to hear her story. Joe gives her story about how she is a nymphomaniac and how she became sexually awoken at a young age, flashback to a younger Joe (Martin) who goes through men for her own pleasure with her best friend B (Clark) in a competition level.

As the sexual stories compare to Seligman’s love of fishing we learn how Joe finds herself in this situation, well for the first chapter of the film.

Characters – Joe is the nymphomaniac, we do meet her at different stages of her life, from her first sexual encounter to her stage where she is left beaten up. We learn how she enjoys sex and has her whole life, she has only followed the idea of sex though, never believed in love, telling her story show where she is now. Seligman is a fisherman that takes Joe in to help her fix up, he listens to her story comparing it to his desire to fish. Jerome is one of the first true lusts that Joe has one that she might have loved, he was her first lover and soon becomes the pretend boss in her life, the one she can’t have. The rest of the characters we meet are those that are involved directly or indirectly with her sexual stories.

Performances – Charlotte Gainsbourg is good at the telling the story side of the film, she does show the regrets of her characters past, but it is Stacy Martin that does sexual side of the story and as a newcomer does become the star of the show. Skarsgard is always a man you could listen to tell a story, this is all he does though. The performances are fine but no one outside of Martin really stands out.

Story – The story here follows Joe a nymphomaniac that is telling her story to a man that offered her help in her time off need. Now this is a story about addiction, this time her addiction is sex and how it has affected different moments of her life. The story does give us lots of comparisons between sex and fishing which is weird and does try to make a big statement about people vision of life.

Settings – The settings show us the different locations that Joe has been having sex and what it means to her life, none of the settings become the most important part of the film though.

Scene of the Movie – Chapter 4.

That Moment That Annoyed Me – LaBeouf doing an accent.

Final Thoughts – This is part one of a double header, I am not looking forward to part two as this film doesn’t become the most interesting when it comes to everything going on.

Overall: Not the most interesting.