Plot: Jo Tae-Oh is a young man who was grown spoiled in a wealthy family. He keeps on committing pretty much every crime that one can think of. He tries to buy his way out of everything which almost always works but Detective Seo Do-Cheol won’t let that happen this time.

Tagline – He will stop at nothing

Story: Veteran starts as we see how Seo Do-cheol (Hwang) and his team operate taking down criminals, his latest target in young businessman and vice-president of the family business Jo Tae-oh (Ah-in Yoo) who playboy lifestyle has been raising eyebrows as he can buy himself out of any problems.

When one of the contractors attempt suicide after lack of payment, Seo starts to investigate Tae-oh to bring down his corruption at a price as he puts his career and marriage on the line to bring them down.

Characters – Seo Do-cheol is a detective that has been operating with his team to take down criminals for years now, his latest job made him a connection to a contractor that gets terminated before receiving payment, this gives Seo a chance to look at the vice-president of the company where he must show his determination to expose the truth and bring him down against everyone else’s opinions. Jo Tae-oh is the vice-president of a family company where he has more money then sense which lets him indulge in illegal part of life with his lawyer needing to clean up his actions.

Performances – The performances from the whole cast are good, Jung-min Hwang in the leading shines with his determined mindset to bring down Tae-oh. Ah-in Yoo is great as the playboy businessman, he brings out his cockiness in nearly every scene while also being able to snap at any moment.

Story – The story follows one determined detective trying to take down a vice-president of a ruthless company who pays off anyone that tries to go against him. The story does have plenty of twists along the way and does handle business corruption well, we also get to see how South Korean culture can play into decisions being made by characters. The pace of the story works well to as it never seems to let up even if the film is over 2 hours long.

Action/Comedy/Crime – The action in this film is kept for a couple of good sequences while we focus on the crime side of the film for the most part. We have moments of comedy while they don’t take over the film.

Settings – The films place in a South Korean city where the rich can get what they want and get away with what they want, and the cops must try to take them down. 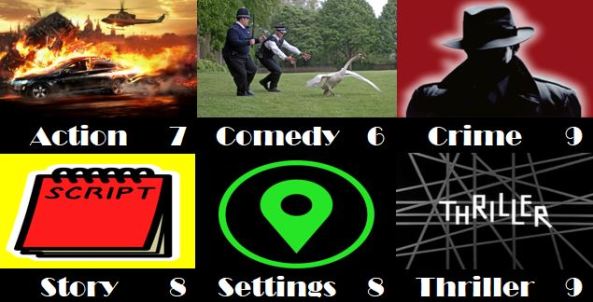 Scene of the Movie – The takedown.

That Moment That Annoyed Me – You feel we could have had more of Jo Tae-oh action before this crime.

Final Thoughts – This is a good crime thriller that exposes plenty of truths in the corruption one man had been causing and shows the best of the two men and what they are fighting for.