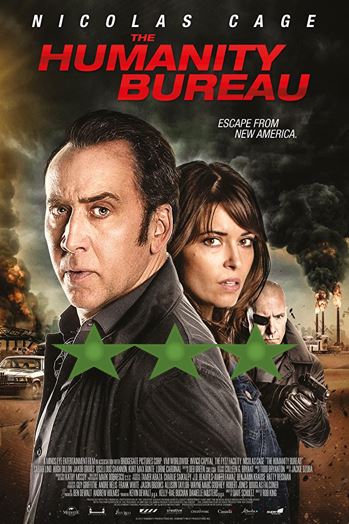 Plot: A dystopian thriller set in the year 2030 that sees the world in a permanent state of economic recession and facing serious environmental problems as a result of global warming.

Story: The Humanity Bureau starts as we enter an America where productivity is measured to help keep the country together after famine and a civil war. An agency known as the Humanity Bureau decides if people are helping society enough, with Noah Kross (Cage) being the agent we follow, we see he can handle himself if situation go wrong too.

On his latest case investigates single mother Rachel (Lind) and son Lucas (Davies) who have been selected to move to the New Eden location as they can’t support themselves enough. When Noah starts to learn the truth about the New Eden he goes against the bureau to save Rachel and Lucas with his old partner Adam (Dillon) leading the chase for him.

Thoughts on The Humanity Bureau

Characters – Noah Kross is a Humanity Bureau agent with his assignments being to figure out who should be sent to New Eden, when he starts to be shown the truth about New Eden he gives up his role to save a mother and son, using his memories of his childhood to guide them to freedom. Rachel is the single mother that is doing everything she can to keep her son safe. Lucas is the son, he is like any growing boy that just wants to enjoy his life, he has a terrible attention span though. Adam Westinghouse is the old partner of Noah’s he is forced to track him down knowing the truth, he doesn’t care as much as Noah to what happens.

Performances – Nicolas Cage is an actor I could watch in anything, however good or bad he or the film is, in this one he is good without going into the full Cage mode we know he is capable off. Sarah Lind is solid too even if most of her work needs to come from the conversations over the action. Jakob Davies is fine as for kids in films, he does get annoying at times, but that is the character not the performance. Hugh Dillon as our main villain is mostly forgettable being filled with the generic traits we know too well.

Story – The story here takes us to a future where the world could have ended as we know it, famine and war swept across America and now one agency controls the country offering hope. We follow one agent that learns the truth about the hope and the Eden and goes out to save a mother and son. This is something we have seen before and it always works, there are shocking twists along the way which will surprise and will entertaining for the time it flows by.

Action/Sci-Fi – The action in the film does feel like it is one of the first takes, everything felt like it was one step behind with the shoot outs coming off weak and the chases over before they start. The sci-fi world we enter is interesting, I would have liked to see more but where we go works well.

Settings – The film takes us through the empty landscapes that have been hit by the effects of the change in the Earth.

Special Effects – The effects are weak for the film too, as mentions the action looks weak, but the computer elements seem like a near future idea.

Scene of the Movie – The showdown

That Moment That Annoyed Me – This felt like the opening sequence for a television show.

Final Thoughts – This is an easy to watch sci-fi thriller which could have been strong but isn’t terrible. 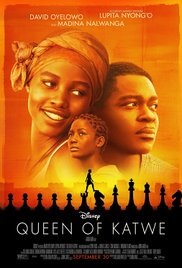 Plot: A Ugandan girl sees her world rapidly change after being introduced to the game of chess.

Story: Queen of Katwe starts as we meet Phiona (Nalwanga) a Ugandan girl from a family that struggles to put food on the table each day as she comes from a big family. On the other side of the town Robert Katende (Oyelowo) has been working on introducing sports to the kids and with his latest choice chess, he finds himself getting Phiona joining his class.

When Robert sees the potential in his students he must overcome discrimination in class to give them a chance against the students who can afford an education in a tournament for the school district, as well as overcoming problems that come from living in the slums.

Thoughts on Queen of Katwe

Characters – Phiona is from the slums of Uganda where she sells corn just to help support her family but when she learns she is chess prodigy she must learn how to balance the slum life and the success she might achieve from chess. Robert Katende is placed in the position of helping sports minister help the children of the slums learn a sport to give them a positive moment in life. He fights for the children to have a chance at competition. Nakku is the mother of Phiona that has struggled through keeping a roof over the head of the children and food on their table but it upsets her seeing how her children that could have a future they can’t afford.

Performance – Madina Nalwanga comes from nowhere to give a powerful performance of the young woman that must learn to overcome her problems to achieve greatness, David Oyelowo is fast becoming one actor you know can always give us fantastic performances and this is no different, Lupita Nyong’o is once again great in her performance showing how she is one of the must underused actresses in Hollywood.

Story – The story of one girl from a place no one would consider being one of the biggest prospects in chess is a success story we all like to hear about. We get to experience the ups and downs Phiona must face to become respected in field and the people that support her along her way. This might well be a film about chess

Biography/Sports – This might only be looking at a small part of Phiona’s life but it is the most important part, the part where we get to follow her learning curve of the sport that she loves.

Settings – Seeing the different backgrounds the children involved comes from is great to see, it shows that sport can bring people together regardless of their backgrounds.

Scene of the Movie – The first tournament.

That Moment That Annoyed Me – There wasn’t anything.

Final Thoughts – Sport that brings people together that is the point of this film which is what is great to enjoy, coming from a country you wouldn’t see as a chess champion also helps us enjoy the ride.