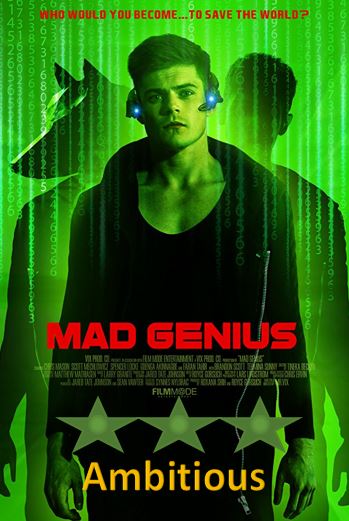 Plot: A young mad genius attempts to ‘hack the human mind’ in order to fix humanity. 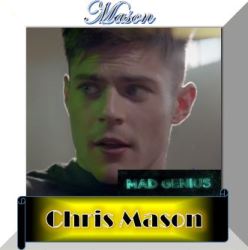 Story: Mad Genius starts as we meet hacker Mason (Mason), he has hacked anything in the world, but never feels like he has accomplished anything, now he wants to save the world by figuring out a way of reprogramming the human brain to avoid the destructive nature.

Going about this means going up against the deadly hacker Eden (Tahir), while dealing with his imaginary projection Finn (Mechlowicz) to whom he bounces ideas off, as he looks to solve what he sees is the biggest problem in the world, the human mind.

Characters – Mason is brilliant hacker, he has hacked government projects before, he feels like there is more that he can do, when he wants to start to fix the human mind to get rid of the destructive nature, he must work with his projection that can push the limits to make things happen, he is always on the edge of reality and insanity which makes him an interesting figure to try and save the world. Finn is the projection that Mason has created, he plays out like an angel and devil on the shoulder giving him good and bad ideas to succeed at certain objectives. Sawyer is the young woman that walks into Mason’s life though she has a bigger meaning in his mind. Eden is the hacker that has been working on the mind conversion and the enemy that Mason makes, he will hurt people for information when looking for his tools that Mason steals.

Performances – Chris Mason is good in the leading role, you can see both sides of his mentality as he is on the edge. Scott Mechlowicz gets to have the most fun because he character can do and say what is on the mind of Mason, loud and brash throughout. Faran Tahir is always good for a villainous role and this is no different. Spencer Locke does a good job when we see her, but her role isn’t written as strong as the rest of the main cast.

Story – The story here follows the idea of trying to use a machine to reprogram the human mind to solve the problems in the world, we are in the world of hackers for this story which shows the danger they will be facing and the different limits people will go to for the same information. This will ask the question about where the human mind will be, and would you want to fix the mind to solve problems or let the mind learn the solve the problems. The tone of the story is strange though because part of the film does feel like it is a young adult style film, but the tones being shown wouldn’t be for that audience.

Sci-Fi – The sci-fi elements of this film come from being able to use technology to try and control the human mind, beyond ambitious with the concept, but believable with an idea.

Settings – The film keeps us in the settings you would imagine hackers to operate in, we would see where they meet, hang out and conduct their experiments to get to the next level of success.

Special Effects – The effects are consistent with how they are shown, they start of strange, but by the end of the film the jamming like moments look and fit the film. 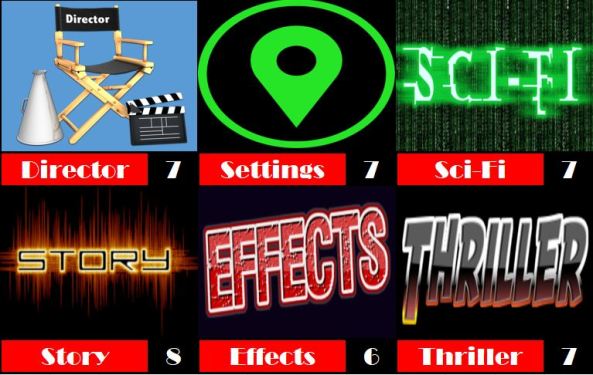 Scene of the Movie – The glitches start.

That Moment That Annoyed Me – Certain moments of comedy or banter feel like a different movie.

Final Thoughts – This is an ambitious sci-fi film that will ask questions to the audience which is what we like to see and even though we go down the path you would expect this is an enjoyable watch. 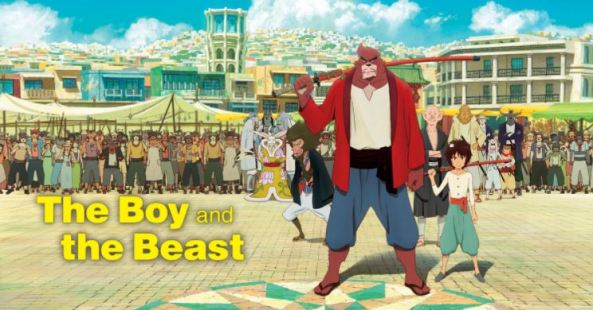 Plot: When a young orphaned boy living on the streets of Shibuya stumbles upon a fantastic world of beasts, he’s taken in by a gruff warrior beast looking for an apprentice.

Story: The Boy and the Beast starts as we learn that Kumatetsu a bear like creature and Iozen will be fighting to become the new Lord of the beast world, Iozen is the favourite to replace the previous Lord because of his ability to teach others while Kumatetsu need to find an apprentice, which takes him to the human world to search for one.

Ren is an orphan boy that has lost his mother leading him to running away from home living on the streets of Shibuya. When Ren has a chance meeting with Kumatetsu he takes him back to the beast world where he renames him Kyuta making him the apprentice, hoping to give him that upper hand in the battle to become the Lord of the beast world.

While the two find themselves constantly arguing the two go around the world to learn, well Kyuta does as Kumatetsu believes he knows everything already making the teaching becoming difficult. Kyuta learns the skills becoming an equal to Kumatetsu but when he finds himself back in the real world where he meets Kaede a young woman that teaches him things he should have been learning in school but his visits to the real world show him the threat coming towards both worlds that he must work with Kumatetsu to defend them both.

Thoughts on The Boy and the Beast

Characters – Ren runs away after his mother dies finding himself in the Beast world. In the Beast world he is renamed Kyuta and becomes the apprentice to Kumatetsu where he becomes a warrior unlike anything his master, when he grows up he becomes conflicted into which world he would like to be part off. Kumatetsu is the warrior that wants to become the new lord, he has trained himself but it makes him an unpopular figure in the world but once he takes Kyuta in he cleans up his act before the battle to hopefully become the lord the world wants. Kaede gives Ren a reason to stay in the real-world, she is a lonely figure with her age but the light Ren shows her in people gives her a reason to stay strong.

Story – The story starts off being a mentor and apprentice storyline where the two clash through the training and teach each other life lesson along the way. These lessons will be used in their final showdowns to show how far the two orphans have come. This is a very culture filled idea that we don’t always see in the Western world but the message is simple, learn to prepare because the battle will come from the people you least expect it to.

Adventure/Fantasy – The adventure side of the film takes our lead character Ren into a new world, a fantasy world of beasts, it blends the two ideas together perfectly to create the world we enter into.

Settings – The visual looks of both worlds come of fantastic, we have the Japanese city which is what we know well and the beast world which shows us how the training is completed.

Animation – The animation is looking flawless again with everything looking and feeling like we are part of this world.

Scene of the Movie – The final battle

That Moment That Annoyed Me – This is one film that didn’t annoy me at all.

Final Thoughts – Yet another fantastic Japanese animated movie that can be watched, learned from and most of be something to give you an experience unlike any other film.

Overall: Must watch for animated fans.