Plot: Disaster hits when two teenagers are caught in a fire on the 20th floor of a skyscraper. Their parents are on the 60th. Will they survive the flames?

Story: Crystal Inferno starts as we see how a shady businessman Lucas Beaumont (Barber) will look to cut costs in his latest skyscraper at any cost. His latest target to corrupt is Brianna (Forlani) who already is in a difficult marriage to Tom (Bamber) and sets up a fake affair to get her out of the business dealings.

When the divorce starts going through, Anne (Jackson) and Ben (Rouse) the children learn the photos are fake they head to save the marriage in the very building Brianna was meant to be inspecting, when disaster strikes as a fire breaks out and the parents must figure out how to save their children.

Characters – Brianna is a structural engineer that has been framed with an affair to keep her quiet from exposing the cost-cutting on the latest building. She is trying to save her marriage, but once the fire breaks out it will be her skills that come in handy to save their children trapped in the fire. Tom is the husband that has been feeling distant from his wife and the photos sent to him give him means to be. He must however trust Brianna to save their children while he seeks more help. We have the two kids too that are trying to prevent the divorce after discovering the truth about the photos, they need rescuing, that is their job here.

Performances – The performances are not the best, the supporting cast are at the awful level of being lost more than anything in most scenes. As for the leads, Claire Forlani, what the happened to her, remember she used to be one of the hottest properties in the business, reduced to this and not giving us any belief things could get better for her. The rest of the family just don’t get the moment to shine in the film.

Story – The story here follows a family torn apart in their real life, that gets bought back together after getting captured in a skyscraper fire, we do have one twist in the parental figure that needs to prove their love with it being the wife that may have done wrong. The rescue attempt happens without anything being anything overly memorable and you will forget anything about the story quickly.

Action/Adventure – The action is weak for a disaster styled film which only seems to have the one explosion and not much on the case of near misses or edge of your seat action.

Settings – The film is set in the skyscraper, but apart from the lift shaft you would barely remember it was set in one.

Special Effects – The effects are weak too when anything is out of place. 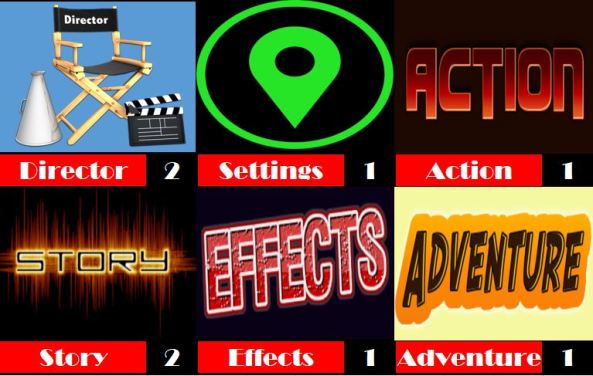 Scene of the Movie – The credits because it is over.

That Moment That Annoyed Me – It just isn’t interesting.

Final Thoughts – This is a boring action movie which just never gets going, never gives us characters we care about and just becomes terrible. 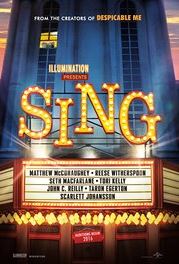 Plot: In a city of humanoid animals, a hustling theater impresario’s attempt to save his theater with a singing competition becomes grander than he anticipates even as its finalists’ find that their lives will never be the same.

Story: Sing starts as we follow a hustling theatre owner Buster Moon, looking to save his career, we follow the other animals in the city including say home mother pig Rosita, an underachieving musician mouse Mike, punk rocker porcupine Ash, gorilla about to enter the world of crime Johnny and shy elephant Meena, that enter this competition that Buster moon hosts with a prize of $100,000.

While Buster needs to find a way to make the money for the prize the talent continues to build their performances, learning how the breakout of their average lives being the best they could ever be.

Characters – Buster Moon is an ambitious but unsuccessful theatre owner, who has always dreamed of putting on a show everybody would love. He is quick thinking when it comes to getting him out of trouble, he is also ambitious enough to try something new and motive people to try. Rosita is the mother pig of 25 piglets, she has always dreamed of singing but lacks the charisma until Buster gets hold of her. Mike is a wise cracking mouse that is always looking for a quick buck. Ash is meant to be a teenage porcupine that is a punk rocker that needs to change her style to make the impact she deserves in music. Eddie is the only friend Buster has in the theatre, his family has helped fund Buster mad cap ideas before, he is the only one that will stand by him. Johnny is a gorilla that is destining to follow his father in a life a crime, even though he wants to be a singer, he faces the decision to whether to turn his back on his father or not. Meena is the shy elephant with the voice of an angel, she needs to learn to come out her shell to show the world her talent. 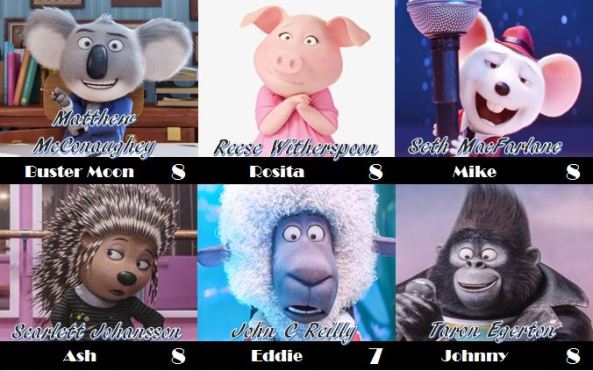 Story – The story follows the group of everyday people, well animals getting a chance to follow their dreams in the music industry from an ambitious theatre owner. While you can look at the story in two directions, one would be poking fun at these countless talent shows on television now and the other being showing people how to follow their dreams however hard they seem to be, if you have the talent you will get the chance. it is sweet and simple story that can be enjoyed by everyone who watches.

Comedy/Family/Music – The comedy is clear to see in how either the animals could be known for certain types of music or how they act to become something. The family should all enjoy this movie to be honest and the music include has something for everyone, from pop songs to classics, it should check the boxes for everyone.

Settings – The fantasy settings feels like it is a version of LA with the animals included, it works for the ambition the characters are showing.

Animation – The animation style used works and never looks out of place for the film, could easily be up there with the best.

Scene of the Movie – The grand show.

That Moment That Annoyed Me – Too much Mike, because he does feels like one of Seth MacFarlane creation.

Final Thoughts – This is an easy to watch and enjoyable throughout, it is something I can see many people get a smile from.