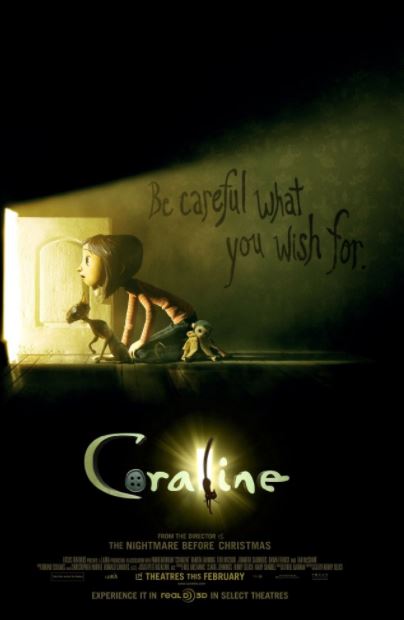 Plot: An adventurous girl finds another world that is a strangely idealized version of her frustrating home, but it has sinister secrets.

Tagline – An Adventure too Weird for Words

Story: Coraline starts as we meet Coraline Jones, a young girl that moved into a new home with her over busy parents, who never find time for her, her imagination tris to run wild and once she discovers an alternative world where her parents always have time for her, she starts on this new adventure.

The longer Coraline stays in this dream world with her other parents the deeper the truth about this world will strike fear into her, as she tries desperately to return to her real parents.

Characters – Coraline is a young girl that needs to let her imagination free, which her parents are not letting happen, when she gets into this new world she goes on the adventure she dreams off only to see what is the most important to her. The parents are too different sides of what Coraline is wanting, one side busy the other side always free to play. We do have the other colourful characters which help Coraline unlock the truth.

Story – The story plays into the idea that a young child (this time a girl) imagination can run wild leaving them to get into trouble and going on an adventure to save her family. To me this felt like a Studio Ghibli story, with the fantasy elements and the young girl needing to save the day in a world which could contain nightmares. This story does contain large amounts of peril which will keep you wanting to see where things will end up going next for Coraline.

Fantasy – The fantasy elements being used in this movie are wonderful to see, as it uses moments and worlds that could easily grace a horror film.

Settings – The film does take place in and around the one house which shows how the mind can create an adventure that only a little girl could uncover.

Animation – The animation used looks wonderful and plays into the fantasy elements of the film that are going on through the film. 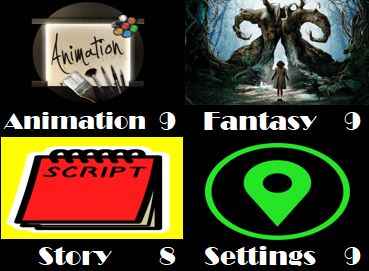 Scene of the Movie – Searching for parents.

That Moment That Annoyed Me – Slightly too dark for a kids film.

Final Thoughts – This is a wonderful animated movie that knows how to keep the story interesting and keeps us guessing until we get to the end.