Plot: During an adventure into a dark criminal underworld, Han Solo meets his future copilot Chewbacca and encounters Lando Calrissian years before joining the Rebellion.

Story: Solo: A Star Wars Story starts as we meet Han (Ehrenreich) and his girlfriend Qi’ra (Clarke) are they are planning a life away from a prison like planet, Han gets away and joins forces with smuggler Beckett (Harrelson) and along the way he meets Chewbacca (Suotamo) and Lando Calrissian (Glover) as they go on one high risk heist to clear their debts from Dryden Vos (Bettany).

Characters – Han comes from a prison like planet, dreaming of being the best pilot in the galaxy, once out he wants to save his girl, but to do so he must team up with smugglers to pay for his own ship, he meets his trusted co-pilot Chewbacca and other business partners in the galaxy, not wanting to commit to either side of the impending war. Chewbacca shows his loyalty to Han, as the one who saved him, he is pretty much what we know, but strangely has more of the comic side like we have seen in the modern films. Beckett the thief that reluctantly takes Han under his wing, he teaches him the trade and how to survive becoming the mentor figure for the film. Qi’ra is the girlfriend from the prison planet that Han wants to go back for and save one day, she gives him the strength to take the risks he does. Lando Calrissian is the charismatic smuggler that knows how to get out of any bad situation, he has the flare to draw the ladies in and will do anything to protect his ship. Dryden Vos in a gangster figure that the deal is for, he will kill people, but just ends up being standard villain, not offering much of a threat or back story, to what his scars are about. We have a couple more names characters, but none make too much of an impact, L3-37 doesn’t hit the comedy levels that is hoped for and Rio falls into knocked off Rocket Racoon territory.

Performances – I don’t want to write that any of the performances we bad, the problem is that most are not that memorable, Alden always had huge shoes to follow and he doesn’t seem to capture the charm Ford bought to the role, Joonas is great as Chewbacca, but not too difficult for what he needs to do, Woody Harrelson is someone I could watch in most films, he is always good. Emilia Clarke continues to pop up in big franchise movies and being fine without being anything more, Paul Bettany enjoys a villainous role without needing to do much and Donald Glover is the scene stealer here as you want to watch every moment he is in. 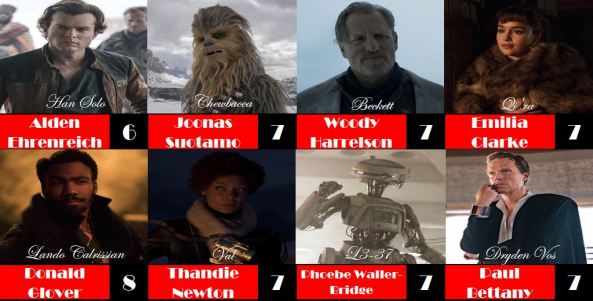 Story – We know from the start this is an origin story for Han Solo, this does the instant thing we know, HE WILL NOT BE IN TROUBLE IN THIS FILM, putting him in any peril related moment is almost pointless same goes for Chewbacca and Lando, as for the rest there is always questions about their relationship to Han and whether he could trust them, this is good part. The story also includes the origin of the Solo name, which is awful. The problem with the story for myself is that it is a generic heist movie that we have seen with Firefly/Serenity who did it a lot better, this doesn’t give us too much to go on even if the story is paced well to not give us too much slow moments.

Action/Adventure/Fantasy/Sci-Fi – The action is on the levels you would expect for a Star Wars film, we have laser battles which the bad guys can’t shot for shit and the heroes one shot anyone, so basically me on Fortnite. The adventure does take Han on his first across the galaxy even though it never feels like we are part of it and even the sci-fi side of the film just seems to not hit the marks.

Settings – The settings take us to the different planets, we have a snowy one, a criminal based one, a desert one and mining one, none look overly original or make anything memorable about what happens there.

Special Effects – The effects are the best part of the film, nothing looks out of place the creation of the different droids is great and the space sequences look flawless.

Scene of the Movie – Lando alone.

That Moment That Annoyed Me – How he got the Solo name.

Final Thoughts – This is one I can see the Star Wars fan loving, if you haven’t seen a Star Wars movie, this will miss on too many levels, the comedy barely hits, the characters decision making makes no sense and by the end of the movie you will be better off watching Firefly. 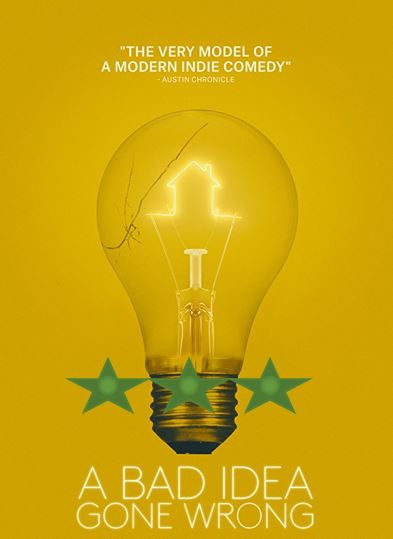 Plot: Two would-be thieves forge a surprising relationship with an unexpected house-sitter when they accidentally trap themselves in a house they just broke into.

Story: A Bad Idea Gone Wrong starts when two burglars Marlon (Jones) and Leo (Rogers) plan to rob a big house, they have planned to get in and what to steal, but things soon start going wrong when they meet the house sitter Darcy (Pienta) who believes they can find the goods they are after.

As the night unfolds the truths are revealed and the night ends up going from bad to worst for the two thieves and their hostage as they find themselves locked in the house.

Characters – Marlon is one of the thieves, he comes up with the ideas to make things happen after Leo does the leg work, he will try the crazier ideas through the night. He isn’t happy with certain decisions that Leo makes. Leo is the partner in crime, he has picked the house for a certain reason which will only make complication through the night. Darcy is the house sitter or, so the thieves think as the dramas between the two in the mix.

Performances – The performances between the leads are solid, we follow Matt Jones, Will Rogers, Eleanore Pienta do have good chemistry and handle the material well without becoming the fully stand out performance between the three.

Story – The story here follows two hapless thieves as they try to break into a house which only ends up with them becoming trapped in the house with a stranger, trying to plan a way out before the owners return. This in an interesting concept, even if not everything comes off well, certain moments come off overly long and drawn out without really going anywhere. This could have created bigger moments to fill the gaps in the story which falls flat.

Comedy – The comedy does work in places without giving us a true laugh out loud moment until the end.

Settings – The film takes place in one location, the house that is being broken into which does help with how the film unfolds.

Scene of the Movie – The alarm goes off.

That Moment That Annoyed Me – There are moments in film that fill like filler.

Final Thoughts – This is a slow moving comedy that does have a good idea, but doesn’t play enough into the comedy to get the laughs it could do.

Overall: Comedy that doesn’t have enough about it.