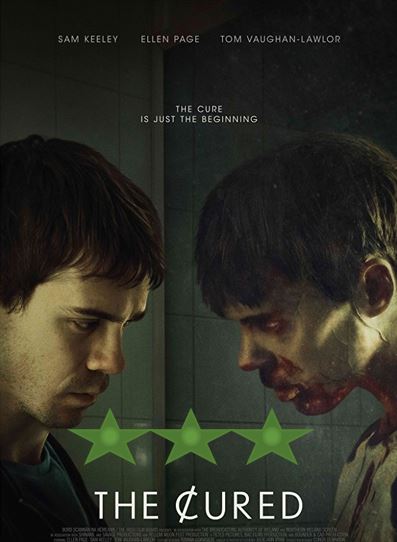 Plot: A disease that turns people into zombies has been cured. The once-infected zombies are discriminated against by society and their own families, which causes social issues to arise. This leads to militant government interference.

Tagline – The cure is just the beginning

Story: The Cured starts in Ireland in the aftermath of a zombie outbreak, 75% of the infected have now been cured and are slowly being released back into society, they are scared with the horrors they committed while in the zombie state, Senan (Keeley) is one of the latest to be released in the care of his sister-in-law Abbie (Page).

The world isn’t ready to let the cured back into society, seeing them as criminals, Senan must keep his head down and get on with his job, which involves trying to help cure the remaining 25%. As the tension between the cured and the never infected rises, the cured create a group of terrorism against the people who treat them like diseased and the film turns into a moral discussion about what would happen.

Thoughts on The Cured

Characters – Abbie is the single mother that lost her husband in her outbreak. She takes her brother-in-law in to help he enter back into society after he is cured from the infection. She is doing the right thing only she finds herself in the middle of a political battle between the two sides. Senan is the man that has been cured, he is still having the nightmares of what he did through the infection, given an honest chance by his sister-in-law he is left tempted by his friend who wants to start a rebellion for the cured. Conor is trying to create a rebellion against the system that won’t give the cured a chance, he will go too far and start a battle people are not prepared for.

Performances – Ellen Page is clearly the big draw for this movie, she is good even if her role is basic lead zombie film material. Sam Keeley is the best in the because he is the one torn between the two sides, he does the guilt he feels and the desperation to fit in again. Tom Vaughan-Lawlor as the cured villainous figure works well because he makes us understand he full motives well throughout.

Story – The story brings us into the world where the zombie outbreak has happened and now the infected can be cured and bought back into the world, we follow the effects on how society would act when letting the cured members of the community back into everyday life. This side of the film is the most interesting because it brings up the divide people can have in general life, not being given a chance, sadly the film does turn too political and ends up being like every other zombie film.

Horror/Sci-Fi – We have here a zombie apocalypse, check one for the horror, the problem is that this isn’t the scariest by any means. The sci-fi elements are clear when it comes to dealing with the zombie outbreak.

Settings – The film is set in Ireland, with one town that is dealing with the aftermath of the zombie outbreak and how they act towards the cured coming back into their lives.

Special Effects – The effects are good without needing to be turned to, that often.

Scene of the Movie – The final scene.

That Moment That Annoyed Me – Is Abbie meant to be Irish?

Final Thoughts – This is a nice fresh spin on the zombie genre, it does ask big questions, before turning into the typical zombie styled movie.

Overall: New, but not brave enough to follow through.