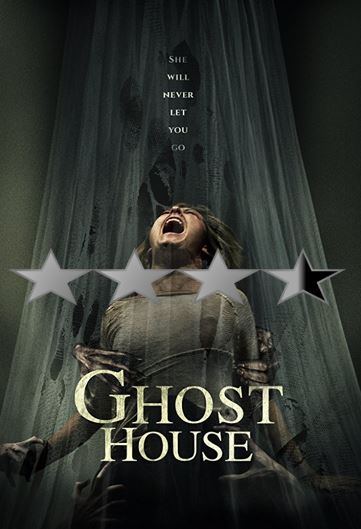 Plot: A young couple go on an adventurous vacation to Thailand only to find themselves haunted by a malevolent spirit after naively disrespecting a Ghost House.

Tagline – She Will Never Let You Go

Story: Ghost House starts as our young American couple Julie (Taylor-Compton) and Jim (Hebert) arrive in Bangkok, Thailand for a romantic holiday with Jim planning to propose to her. With the holiday going well the newly engaged couple meet to British men Robert (Banks) and Bill (Gray) who enjoy a night partying before taking the couple to a remote Ghost House Graveyard to perform a ritual.

This ritual leaves Julie haunted by a malevolent spirit that haunts her dreams, her days and her nightmares, leaving Jim to figure out how to save her before her time is up and the local curse makes her the latest victim.

Characters – Julie is one half of the couple, she loves learning about new cultures and uses her camera to capture every moment possible, this does make her an easier victim to become cursed as she must battle the spirits to stay alive. Jim is the other half of the couple, he has planned to propose on this holiday and it all goes well for him. When the partying gets out of control he must show how committed he is to Julie to find a way to lift the curse that has been placed on her. Reno is the connection to the darker arts of the spirits, he offers to help, but for a price, this character here shows us what an outside can achieve when he gets to know the area.

Performances – Scout Taylor-Compton is most notably known for her work on the Halloween reboot, so she is no stranger to horror, she does a good job with her terrified reaction. James Landry Hebert is good to with the determination his character needs coming through strongly. The rest of the cast do work well with the film even if you will struggle to enjoy watching the English characters.

Story – The story here plays into Thai culture, which is something horror movies love to do, playing into any culture outside the normal for the man characters. They get cursed and must lift it before becoming the latest victims, this all works well through the film and can’t be faulted one bit. The whole curse will bring us reminders to most Asian ghost/spirit movies because it is easier to get the scares on the audience. Making Jim much more involved is a slight spin on what we have seen before because usually it is the female character doing all the investigating side of the film. This story will tick the boxes for one of my favourite sub-genres of horror and it should keep the horror fans entertained throughout.

Horror – The horror we get in the film does use the jump scares, something we have seen before and something that we know when scares are coming, but not always what they will be.

Settings – Thailand makes for a wonderful setting because it is filled with spiritual culture which outsides always claim to understand and fail too often, the location helps the story.

Special Effects – When it comes to effects we do have a mixed bag, one of my favourite sayings, we get good ghost effects for the spirit which both look terrifying and creepy, but also are similar to what we have seen before.

Scene of the Movie – Looking at the photos.

That Moment That Annoyed Me – The English characters didn’t have the strongest acting to support them.

Final Thoughts – This is a good ghost horror movie, it has jump scares where needed, it plays into a countries culture and most importantly keeps the pace going on the scares.

Plot: A young woman, after witnessing her parents’ murder as a child in Bogota, grows up to be a stone-cold assassin.

Story: Colombiana starts as a young Cataleya witness her parents murder by Marco (Molla) and his men for Don Luis (Benites) in Bogota, Columbia. Her father gives her the means to escape and Cataleya makes it to America where she reunites with Uncle Emilio (Curtis) who offers to teach her how to be a killer.

15 years later Cataleya (Saldana) is all grown up, she is now an assassin for hire and a brilliant one at that. Cataleya has been making a name for herself as a mysterious unknown killer leaving messages on her victims’ bodies, this is against her Uncle’s will and finds special agent Ross (James) tracker her down. Can Cataleya keep her secret life away from the authority and get her revenge on Don Luis that is what we are left to guess about.

Characters/Performance – Cataleya is the assassin who witnessed her own parent’s murder, she has trained for 15 years to get her revenge but now she must continue to pay the price for wanting to see the people responsible die. She is strong, determined and deadly one of the better assassins we know. Marco is you typical villain that breaks the rules and is willing to do anything to stay on the wrong side of the law. Ross is the agent looking to do the right thing on every step of the way.

Performance wise, Zoe Saldana is always going to make for a beautiful sexy assassin, Jordi Molla is fine throughout but isn’t used as much as you would think, and Lennie James is good as you would expect in a law role.

Story – A young girl that witness’s parent’s murder and turns into an assassin to get revenge, this has been done before and is a classic tried and tested formula for the genre which I feel does get the good pay off here without being the greatest in the genre. There isn’t too much we need to see for it to be new but what the hell it is fun.

Action/Crime – The action is plenty of shooting with bullets and bodies flying around, this is all good fun and having the assassin revenge angle also works.

Settings – The settings are all what you would have come to expect from the genre without being anything original.

Final Thoughts – This is a good watch, it checks all the boxes without needing to make you think about what is going on.

Overall: Sit back and enjoy the action.