Plot: After wishing to be made big, a teenage boy wakes the next morning to find himself mysteriously in the body of an adult.

Story: Big as teenager Josh (Moscow) is tired of the rules he must face, not being considered big enough to ride fairground rides and not being noticed by the girl he has a crush on. Josh goes to a wish granting machine wishing he could become big.

The next Josh (Hanks) wakes up as a 30-year old man, needing to hide from his parents. Josh moves to New York getting himself a job in a toy company where he gets promoted after befriending the boss MacMillan but deep down he is waiting for information about the machine which could bring him back to his original age. This gives Josh a chance to grew as a person and learn about himself too.

Characters – Josh is the teenager that grows up overnight, he must learn to be an adult where his innocent charm helps his rise through the toy industry as the adults learn from him not to take things too serious. Susan is one of the co-workers also high up in the company, she learns the most from Josh about relaxing and enjoying life over the stress filled life she had been living. MacMillan is the boss of the toy company that takes a shining to Josh believing he can help continue to make the profits and making the toys fun once again.

Performance – Tom Hanks is fantastic through the whole film showing that he always had the ability to handle comedy and carries this movie throughout. Elizabeth Perkins is good in her role as is Robert Loggia as the friendly boss.

Story – The story shows us what would happen if a teenager became an adult overnight and having to learn about an adult life. The idea of this must have felt fresh for the time and with the first boom of technology it also works because the teenager would have been just as good with computers as a lot of the workforce. This is a feel good story about growing up fast and not taking life too seriously at times.

Comedy/Family – The comedy being played out in the film works because it isn’t this wild over the top which we have seen from the genre before and it is one the whole family could enjoy.

Settings – Putting the teenager as an adult in New York City needing to learn about grown up life.

Scene of the Movie – Piano scene, because it has become an iconic scene in cinema.

That Moment That Annoyed Me – As I saw Elf first, I just felt like I was watching the inspiration for that film.

Final Thoughts –This is a classic comedy that could and should be placed inside Tom Hanks’ top 5 of all time.

Overall: One of the all time classics.

Plot: A young teenager camping in the woods helps rescue the President of the United States when Air Force One is shot down near his campsite.

Story: Big Game starts as Oskari (Tommila) is entering his right of passage as a 13-year-old that must go into the woods and hunt alone, like his father and his grandfather. Over his time in the woods Air Force One is overhead with President William Alan Moore (Jackson) on board, but it is shot down leaving Moore (I am going to call him this from now on) stranded in the woods while the traitor Morris (Stevenson) works to recover the Moore.

Oskari rescues Moore and uses his skills to help him out of the woods while Morris and his business partners treat this as a hunting trip with the CIA running operations back in states to figure out who has targeted the President and who has betrayed him.

Characters – President Moore is the man losing approval rating, not used to being in the wild but brave enough to take anyone who would get in his way, he shows the inspiration, selfless nature you would expect from the leader of the free world. Oskari is the teenager sent into the woods to prove himself as a hunter, even though people doubt him, he stands up for what he believes in making him the President’s only hope of survival. Morris is the secret service agent that has betrayed the President for money and he leads the plans to keep the President away from rescue. We do also have the officials trying to find the President back in America all using their own set of skills and the billionaire trying to kill the President.

Performance – Samuel L Jackson looks like he does have a lot of fun in this role where he understands he is playing the mentor figure to Oskari. Onni Tommila is great as the young man looking for his right to passage. Ray Stevenson is good as the main villain but you do feel we could have had slightly more from the character.

Story – The story is about a terrorist plan to kill the President but a boy on his right to passage is the only one that can save him, this side of the story I found entertaining enough with a couple of moments that show both facing their own weaknesses to improve themselves. With that being positive we most look at the negatives, first I don’t really understand the motives of the villains and you just gloss over the war room politics of what was going on which seems like it should be a lot more interesting than we are shown.

Action/Adventure – The action is big when we see it, mostly CGI with the big plane crash and mega explosion at the end, the adventure side of things show Oskari learning the important lessons to become a man in the woods showing he is just like the villagers he is from.

Special Effects – The effects are CGI for the action sequences, we get plenty going on with the moments and the final explosion feels like one of the biggest I have seen in a pure action film.

Scene of the Movie – Final explosion is shocking impressive.

That Moment That Annoyed Me – We spend time in the war room with the Americans trying to fine the President and it is a mix of pointless additional storyline or not involved storyline going on there.

Tagline – The President has one small chance of survival

Final Thoughts – This is an easy to watch action film, it does have a weak side story which does feel out of place at times but away from that you can enjoy this one. 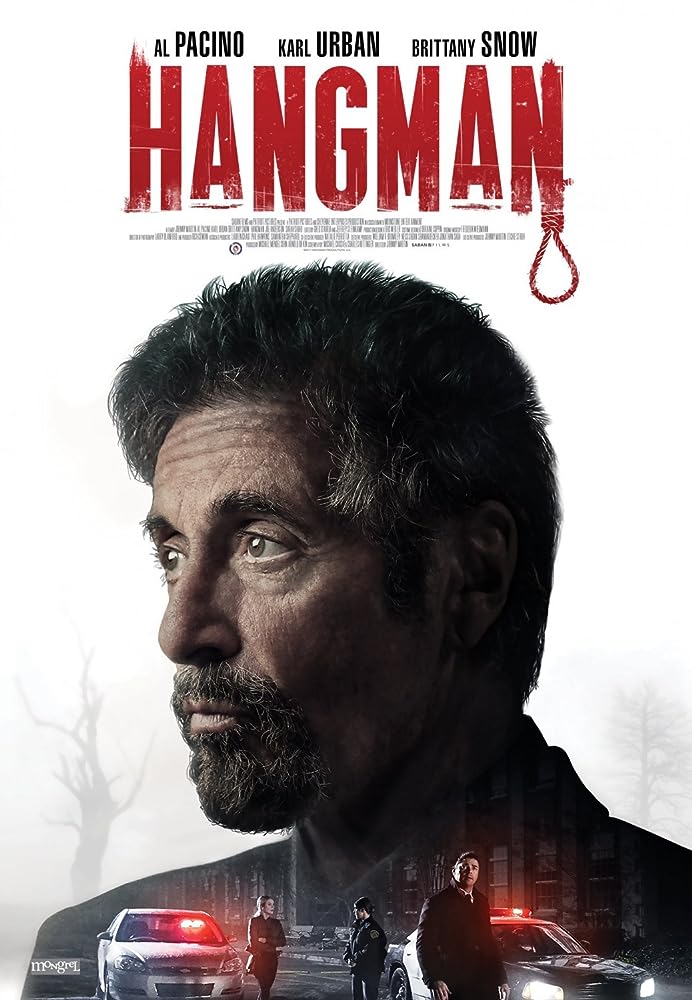 Synopsis: Decorated homicide detective Ray Archer (Al Pacino) partners with criminal profiler Will Ruiney (Karl Urban) to catch one of the city’s notoriously vicious serial killers, who is playing a twisted version of murder inspired by the children’s game Hangman. Every 24 hours, a body is hung revealing the next letter carved into the victim’s body. As crime journalist Christi Davies (Brittany Snow) reports on the crime spree, the trio must race against the clock to prevent further murders. Archer and Ruiney become more entangled in the ruthless game than they could ever have imagined, but they must keep playing to save lives and attempt to catch the Hangman.