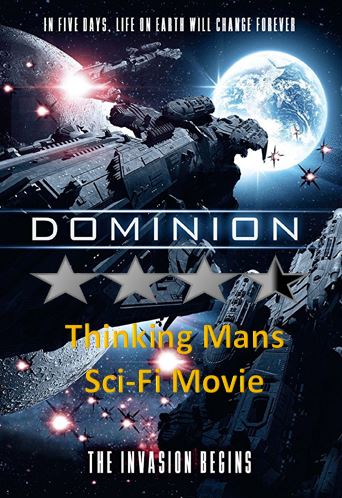 Plot: In just FIVE days the world we know will change forever with devastating results. Jaelen an observer from another planet searches to find and rescue the human woman he fell in love with before it all happens. Robert Casey a retired US Intelligence agent turned UFO investigator races to discover what the yet to be known DOMINION has in store for the Human race.

Tagline – In just five days human existence as we know it will change forever.

Story: Dominion: The Last Star Warrior starts with retired US Intelligence agent Robert Casey (Lynch) who is interviewing a stranger Jaelen (Hammer) in his UFO investigation about an impending attack on Earth that will end life as we know it. Jaelen is from a different world and normally his people would defend against the attack, but they are battling their own war, other peaceful aliens including Tonjura (Marie) offer advice on how to prepare before evacuating themselves.

Jaelan unwilling to leave before his human love Alyssa (Joelle) is safe and freed from the torture of the government that has been warned about the ending coming, Robert races against time to help Jaelen before it is too late.

Characters – Robert Casey is a former intelligence officer turn UFO hunter, he has a reputation for be honest in his hunt which has him welcomed into the community but hunted by his former employers. He helps Jaelen find his love while keeping the secret and accepting his fate. He has the smarts to stay ahead of the people in his field and understands that he can’t be the one to save anybody. Jaelen is the alien living among the humans, he has broken his own traditions by falling in love with a human and even though he knows the end is coming he won’t leave without her. Alyssa is the woman that Jaelen has fallen in love with, she is captured and being tortured in hope of locating Jaelen before he gives away the secret, she is the driving force for Jaelen and Robert to do the right thing.

Performances – The performances from the cast are good through the film, Barry Lynch gives us a truly believable character that is in search of the truth, both smart and ready to ask the difficult questions. Travis Hammer makes us believe his is from another planet through the film, Christine Joelle does well enough, she doesn’t have that much to do other than to have been in pain.

Story – The story here follows the final days of Earth as we know it, we follow an UFO investigation and an alien as they race against time to locate a love and save as many humans as possible before the end date. The story does tell us from the opening that Earth did end and we follow the events leading up to this which is helpful because it changes the tone of the film, to be looking at where things could be going from an unknown invader. It shows love can cross any race and across the universe too. This isn’t all action, it plays into the idea of conspiracy which often get laughed off, while it turns out to be real, it does make this very interesting to see unfold.

Action/Sci-Fi – The action is used few and far between, we have a couple of weak and basic car chases that seem very easy and have no peril. The sci-fi side of this is the highlight as we are left to see the idea of different species and races in the universe that have different ideas for Earth.

Settings – The film uses the settings to place us where you would expect to see UFO investigators would be operating in.

Special Effects – The effects are not used often, they are not the best but they work because we only have the inclusion of UFOs over fighting versions of them. 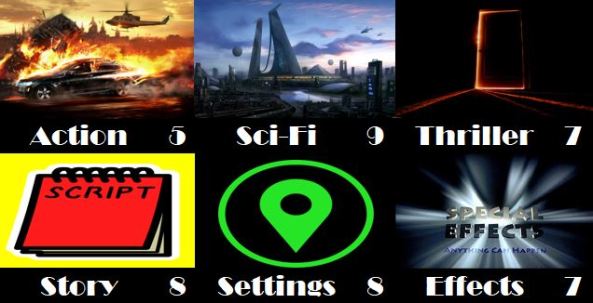 That Moment That Annoyed Me – The UFOs do like generic.

Final Thoughts – This is a thinking sci-fi film, it isn’t about the battle for survival, it is look at how it will end, which is a nice twist and does play into the ideas of both good and bad in the universe.

Overall: Sci-fi fans to try this one out.