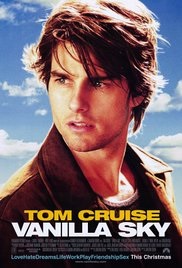 Plot: A self-indulgent and vain publishing magnate finds his privileged life upended after a vehicular accident with a resentful lover.

Story: Vanilla Sky starts as we meet David Aames (Cruise) a playboy publishing mogul that inherited this from his father. He sleeps with beautiful women including actress Julie Gianni (Diaz) but always finds time for his best friend Brian Shelby (Lee). But, his life has been shattered thanks to a car accident which has left him disfigured hiding behind a mask in jail.

While waiting for his hearing David recounts the events which led up to his charges to McCabe (Russell). We learn how David meets Sofia Serrano (Cruz) the woman of his dreams but Julie shows her jealous side causing a car crash which leaves him broken and living between reality and dreams, needing to face his new life.

Characters/Performance – David lived a life where he could have any women living the life of luxury until this lifestyle catches up with him, leaving him disfigured and in jail, recounting the events between the two moments. Sofia is the new love that David falls for, she has all the chemistry he requires for something different being the motivation for David to fix himself. Julie is the jealous former lover that causes the accident, she is an actress that is filled with self-confidence but all that isn’t everything we have come to know.

Performance wise, Tom Cruise is great in the leading role, not being afraid to make himself slightly disfigured for this role. Cameron Diaz and Penelope Cruz are both are both also great in the roles of the two women in David’s life. 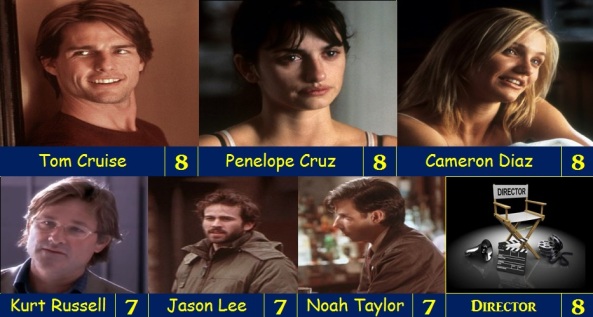 Story – In a story that leaves you questioning nearly everything going on even after you believe you have just worked everything out, well this story will keep you all over the place. I do think this does enough to keep us guessing without becoming tiring and will completely satisfied by the end.

Fantasy/Mystery/Romance – The fantasy world created comes through in the end and it will leave you shocked with the outcome of the film, getting to this stage we are left with a big mystery into just what has been happening with the romance being how David falls in love with Sofia.

Settings – Each setting is used well, but the truly special moment in the New York being empty looks fantastic.

Special Effects – The effects that are used to create the disfigured looking David all come off great with the other effects all doing the required effect in the film.

Final Thoughts – This film will test your mind which is always something we like to see in films, yes, it is a remake or reimagination but still it looks fantastic.

Overall: This was a true mind bender of morale decision making.