Plot: Two Chicago firefighter brothers who don’t get along must work together while a dangerous arsonist is on the loose.

Story: Backdraft starts when a young Brian McCaffrey witness his firefighter father killed putting out the fire. 20 years later Brian (Baldwin) is desperate to follow in his father’s footsteps much like his brother Stephen (Russell). Passing his tests Brian joins Stephen’s unit, the strictest in town.

As the number of fires increase, the number of firefighters are being cut and with each fire brings the investigator Donald Rimgale (De Niro) who uses slow methods but gets results. When Brian becomes worried about the safety of his brother’s actions he agrees to work with Donald to track down an arsonist operating within the city.

Characters/Performance – Stephen is the tough firefighter who enjoys the job knowing he and his team can save as many lives as possible. Brian is the brother of Stephen, son of a firefighter who became the photo of a generation after witnessing his father’s death at a young age. He wants to follow in his father’s footsteps but finds himself having to turn on his brother to investigate arson rather than fight the fires. Donald is a grizzled veteran who has seen the worst in fighting fire, he now leads the investigations into the fires, he works with Brian to locate the arsonist and reckless behaviour being portrayed by the firefighters. The rest of the characters fill the loyal unit, the ex-wife and potential lover without being a major part in the film.

Performance wise, Russell is solid but never reaches the levels we know he can. Baldwin just doesn’t capture the level of performance you would see from other members of the family while De Niro is good in the supporting role. 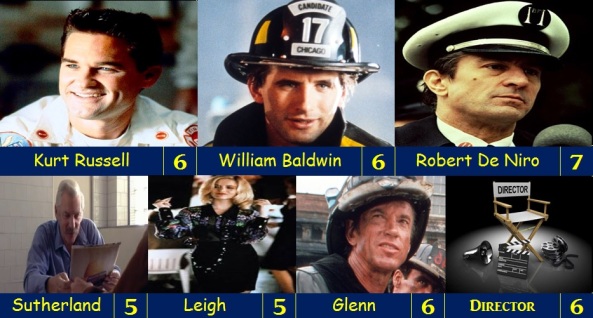 Story – The story shows the life of firefighters struggling with the demands placed upon them by dwindling resources, the lives get put at risk. We get to see the investigation into an arsonist but sadly this isn’t the focus of the story. the focus is on the broken relationship between the two brothers who have gone in different paths when it comes to following in their father’s footsteps. The story is fine but too long in my opinion.

Action/Crime/Mystery – The firefighting scenes are brilliant action set pieces without a doubt but the crime side which should be a major side just doesn’t get the focus required. The mystery also suffers because of this too.

Settings – The settings are used wonderfully to show the intensity of the fires for the firefighters while outside the fires it just feels like a normal city which could be any.

Special Effects – The special effects are stunning for the creating of the fires, using mostly practical effects which still look amazing today. 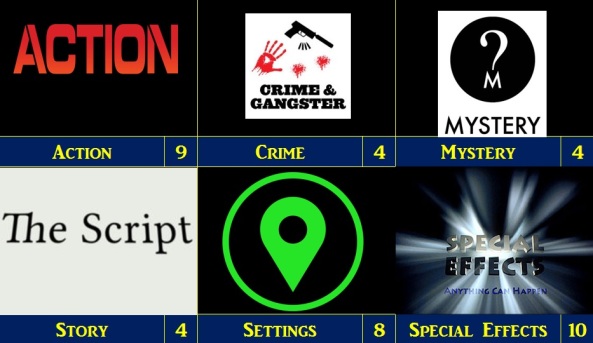 Final Thoughts – The special effects in this movie do save it from being awful but in the end the story is just too flat for my liking.