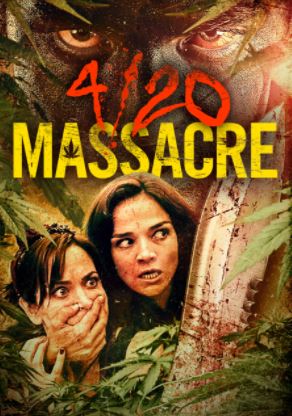 Plot: A group of five women go camping in the woods to celebrate a friend’s birthday over 4/20 weekend. But when they cross the turf of an illegal marijuana grow operation they must struggle to survive the living nightmare.

Story: 4/20 Massacre starts as we follow our five friends Jess (Bernadette), Aubrey (Parker), Donna (Danger), Rachel (Wachsberger) and Michelle (Pistone) as they head off for a camping trip for Jess’ birthday on the holiday known as 4/20 (the motivation for this holiday will be revealed in the film, don’t worry I was completely lost on it too to start with).

As the weekend unfolds the girls have a drink, drug induced time in the woods nearly a local illegal marijuana operation, which brings them face to with a killer protecting their investment.

Characters – When we get into the characters it would be fair to say each one fits into a horror type for the slasher genre. Jess is the cleaner living of the group, the only one that won’t touch drugs and looks after the rest of the group, while celebrating her own birthday. Aubrey fits in the role of the one that is good at heart that has her own feeling for our lead and wants to use this weekend to show their feelings. Donna the stoner of the group spending more time high stating moments of the obvious, like Marty from Cabin in the Woods. Rachel is the womaniser of the group with her latest project along on the trip with Michelle being that project is the newest member of the group just trying not to say anything she shouldn’t around the friends.

Performances – Jamie Bernadette in a leading role again, this up and coming actress is a very busy lady of late with Killing Joan only just appeared on VOD. In this role she once again shows she can handle combat skills and strength to be the lead role, fingers crossed we will see her many more horror films. Diving into the rest of the cast we have good performances from all with Stacey Danger becoming the character you want to see more off.

Story – The story isn’t the most difficult for anyone to follow, it follows five friends that are going for a camping trip only to find themselves needing to survive against a ruthless killer. There is on part of the story that sticks out, none of the film is set at night which is something that breaks the generic idea of slasher films. You don’t need anything too deep here, it does everything the story needs to do.

Action/Horror – The action in the film plays hand in hand with the horror as we see the killer calculate his next kills in full action form, the horror is plenty of blood and gore with the kills, that do feel original even if the moments don’t feel like they have the tension being built in them.

Settings – The film is set in the woods during the day, which breaks the mould for slasher movies which generally take place in the darkness.

Scene of the Movie – Smoking alone.

That Moment That Annoyed Me – Too many disposable characters.

Final Thoughts – This movie plays into the slasher movies of old, it hits the marks on every level making us enjoy the film, it has great kills and a strong lead.