Plot: The NSA’s illegal surveillance techniques are leaked to the public by one of the agency’s employees, Edward Snowden, in the form of thousands of classified documents distributed to the press.

Story: Snowden starts as we follow documentary film maker Laura Poitras (Leo) and journalist Glenn Greenwald (Quinto) meet Edward Snowden (Gordon-Levitt) who is a private contractor for the NSA giving his interview to why he did what he did.

The story begins back when Snowden was training to be a soldier only to be discharged on medical grounds and entering a career into the CIA. We see how Snowden meet his love Lindsay (Woodley) but on the other side of this life he gets to see how the minds of different people inside the CIA work leaving him questioning each decision within before he went onto exposing all the secrets from around the world.

Snowden is the story of one of the biggest whistle-blowers in American history, he gave up his whole life to show the secrets of America and other intelligence communities. This is an important part of history we haven’t fully seen the effects of yet which makes this film almost feel too early. The film moves at a steady pace but can get complicated when certain technological talk going on.

Joseph gives his ever-reliable performance as Snowden without ever looking out of place in the role. When it comes to the reporters exposing the story they all come off great without shining or coming off badly. The rest of the government characters all work well too. The truth is no one lets the film down on performances it is another film that can get caught up on tech talk.

Overall: This is an interesting look at how one of the biggest leaks in intelligence history happened.

Plot: A couple who have known each other since 8 are destined to be together until death do them apart.

Story: Irreplaceable You starts as we meet the perfect couple Abbie (Mbatha-Raw) and Sam (Huisman), who met as young kids and now getting prepared to marry and starting a family, but when tragedy hits Abbie as she learns she has cancer.

Facing her own mortality Abbie starts to prepare for the worst and how she is going to see Sam continue his life without her around. She has the support of fellow cancer sufferer Myron (Walken) who teaches her how to deal with the situation she is facing, being one of the only people that truly knows what she is going through.

Thoughts on Irreplaceable You

Characters – Abbie is one half of the couple, narrating the story to us after her death (this is the opening sequence, no spoiler here), she is diagnosed with cancer and now must face the reality that the love of her life will live most of his life without her and tries to help guide him before she goes. Sam is the fiancée of Abbie that wants to support her through any ideas she must help her come to terms with her situation, this character is a good look at the person that will be left behind in an adult relationship. Myron is a fellow sufferer that supports Abbie through the treatment, trying to help her understand the importance of time.

Performances – Gugu Mbatha-Raw has been making waves for years now, this is the highlight of her career to date, one of the best performances of the year, real, honest and one you fully understand her characters feelings. Michiel Huisman is great too, he shows us just how difficult his characters position would be. Christopher Walken gives us the wonderful supporting performance too.

Story – The story here follows the lives of a couple in the final months of Abbie’s life, showing us how she is dealing with the news and how she plans to make her one true love life without her. The story does deal with cancer and the effects it will have on the loved ones and takes it on to the same level as 50/50, which doesn’t play too heavy on the downs, while trying to show us how moments of normality including humour can help the victim. We know the end of the film from the opening sequence, so this is preparing us to for the end.

Comedy/Romance – The romance in this movie shows us just how cancer can ruin love, but it also shows just how people will be there to support you, even if they know the next chapter. We have sprinkles of comedy, which mostly comes from Abbie as she is dealing with everything.

Settings – The film is set in New York, the city with many stories, we get to see certain locations which are important to the characters involved.

That Moment That Annoyed Me – Final narration, pick one person to read not both.

Final Thoughts –This is a movie that will play with your emotions testing you on every level while telling an important story about how people will be facing the reality of cancer.

Overall: Wonderful movie that tells such an emotional story.

Plot: An adventurous group of friends dare to break into the abandoned orphanage and quickly find themselves trapped and fighting against unnatural forces.

Tagline – Trapped in the famous Witch’s House, a group of urban explorers soon realize that a thirsty demon hides in the shadows awaiting for new souls.

As the night goes on the friends investigate the many rooms to learn the truth about what happened, leaving them to battle against an evil force surrounded the mysterious Amanda, one of the orphans in the home.

Thoughts on Hide in the Light

Characters – The characters are large group of Urban Explorers that head off to nights in haunted or mysterious locations, they don’t go in search of ghosts, rather go in search of adventure searching for thrills. Apart from the brother sister relationships we don’t learn too much more about this group, other than that they enjoy this type of experience. This helps us because it keeps us guessing to who could be in for the next attack.

Performances – The performances are strong from the whole cast, it would be unfair to stay anyone didn’t stick out as the true star of the show, but no one came off like the weak link. Each performance made the film feel real throughout.

Story – The story is one that in the past could have been one that goes in a couple of direction, we have had awful ones, we have had forgettable ones and on that rare occasion we have had that one that stands out. This is in the stand out group, because it takes away the details of ghost hunting to keep the story focus on a group that just enjoy exploring the abandoned buildings. The keep things simple as the film does everything to keep us guessing o just where things will be going and who might make it to the end which is, all we ask for at times.

Horror – The eerie tone of the movie helps with the horror, we have the setting which makes each moment feel like we are trapped in a building which could leave horror around any corner. The horror also doesn’t hold back any moment, which will surprise you.

Settings – The film is set in an abandoned building with a history to be mysterious, it keeps our characters in a location through the film.

Special Effects – The effects are strong here, instead of using too many we are left to imagine what is happening in the scene.

That Moment That Annoyed Me – Not knowing any stories of the previous adventures of this group.

Final Thoughts – This is one of the horrors to watch out for in 2018, this brings a forgettable sub-genre and makes it one of the best enjoyable and edge of your seat horrors of the year.

Overall: Early contender for Horror of the year.

As I couldn’t select a film beginning with Q I decided to look at one man that never won an Oscar, but did get 7 nominations. 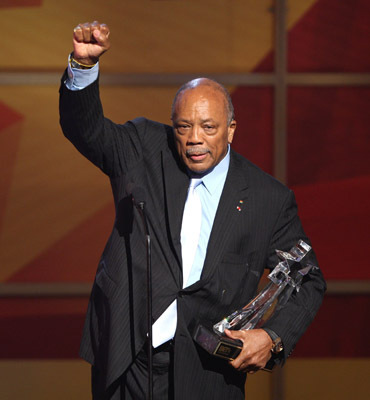 Why I’ve Picked this choice – Quincy Jones has been nominated for 7 Oscars in his illustrious career as a composer, sadly he never won one even though he got two nomination with The Colour Purple which did win heavily in the year of the Oscars. I have decided to highlight a composer because at times they can be overlooked when talking about Oscar movies.

Leave me a comment with your pick for his favourite piece of work.