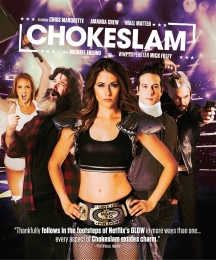 Corey (Chris Marquette), still lives in his mom’s basement with same job slicing meat in a tiny deli for over a decade, a sad and lonely figure. His life shut down after hastily proposing marriage to his best friend Sheena (Amanda Crew) in front of their entire high school only to have her turn him down.

A humiliated Corey wanted Sheena to stay in their small town but she was going onto much bigger things. Ten years later, Sheena, now a world-renowned professional wrestler, famous for her legendary temper in and out of the ring, has come back home for her and Corey’s high school reunion and Corey cannot help himself, immediately falling for Sheena all over again. But professional wrestling has not been kind to Sheena. She’s changed. She’s hostile and burnt-out from years on the road and has announced her retirement.

To win back over her heart, Corey plans a retirement benefit match for Sheena but what Corey never envisioned is that the match lures talent scouts to watch her wrestle and the scouts are so impressed that they are going to fly in the big boss to see Sheena wrestle. If he’s as dazzled as they are, he’ll offer Sheena an exclusive five-year wrestling contract, only it is to wrestle in Japan. Corey feels like he’s been scissor-kicked in the stomach. The very event intended to rekindle Sheena’s love for wrestling, and hopefully her love of him, now threatens to take her away from him forever…Love is hard to pin down.

Plot: Based on the story of Vince Papale, a 30-year-old bartender from South Philadelphia who overcame long odds to play for the NFL’s Philadelphia Eagles in 1976.

Story: Invincible starts as substitute teach Vince Papale (Wahlberg) is struggling to make ends meet in Philadelphia in 1976, the American football team is considered the worst in the league. When Vince losses his teaching job he only has the bar work to fall back on, but when coach Dick Vermeil (Kinnear) has an open day Vince takes a chance even at the edge of 30.

Vince gets called into the final pool of potential new signings but he struggles to make a name for himself and starts to even question if it is worth it, but coach Vermeil doesn’t want to give up on him yet and this soon becomes a success story for the Eagles.

Characters/Performance – Vince Papale is the struggling man in Philadelphia, he struggles to make ends meet and enjoys a drink with his friends watching the football team, he gets a chance to play for his team becoming a media sensation. Coach Dick Vermeil has been struggling to keep his team together after another terrible season, he takes a chance on Vince one that goes against his whole coaching staffs. Janet is a new bartender that works with Vince that does become a love interest after certain things in their lives work out.

Performance wise, Mark Wahlberg is solid in the leading role, he doesn’t turn to his trademarks we know he is can turn to. Greg Kinnear is good in his role while Elizabeth Banks proves to be a good love interest through the film.

Story – The story here does down as one of the great success stories in sport, it shows us that if you were to dream you could get a chance even at a later age but it is all about the effort you put into achieving your dreams. This is a slow moving story and unless you care about American Football you might not enjoy this on the levels you would if it was a sport you understand.

Biography/Sports – Seeing how the people involved in this season shows us just how sport can inspire people, create legends and most importantly bring hope to the people struggling through life, the football scenes are shot nicely but as I don’t watch I am not sure how accurate they are.

Settings – The film looks like it is set in the 70’s and the settings help us feel like we are part of the film.

Final Thoughts – This is a slow sports drama that doesn’t click if you don’t follow American Football.

You don’t know what true psychological discomfort until you watch the critically acclaimed Dogtooth. Director Yorgos Lanthimos has made a career out of making complicated and extremely evasive films and Dogtooth is the Holy grail. The film follows three siblings being brought up in a life of complete isolation carefully constructed by their controlling parents for motives unknown. The audience, initially captured by the absurdity of their living conditions, spend the rest of the film on a case study of their bizarre lives.

Thematically, it is very similar to Lanthimos’ The Lobster exploring the psychological affects that isolation can have on an individual. A rule of thumb I see in a lot of Lanthimos’ films is that you accept your own reality. This film is no different. Here, Lanthimos explores isolation’s effects on intimacy, understanding and relationships.

The cinematography is subtle but brilliant, it ensures that every shot is filmed in a visually interesting and engaging way. The lighting is notably excellent. The cinematography almost carries this film along with its originality. The music, nothing special, is well used and does accent the coverage in this film nicely.

However, the characters are underdeveloped which I know is meant to mirror the environment they have been placed in. But I can’t help but feel that we (the audience) didn’t develop enough empathy with the characters as a result which as a consequence left me more disengaged. Their lack of development reflects the grim realities of their isolation.

In terms of the dialogue, silence is used magnanimously in this film. The emptiness providers the audience with time to contemplate on what has and is going to happen it’s a sign of mature film making. The acknowledgement that every second of precious screen time doesn’t have to be crammed full of dialogue and fancy cinematography. Otherwise, the dialogue is clever and carries a healthy serving of deadpan humour which helps lighten the darker parts of the film.

The plot in my opinion is one of the drawbacks to this film. It is overdrawn and exhausts the audience, we find ourselves disengaged after an hour of watching because the plot is overspent and has no real narrative backbone. Which, from my perspective, limits the film greatly.

Dogtooth is an extremely bizarre case of you except reality for what it is. Everybody lives in different environments and so base reality off the truths that their environment tells them. Even if these truths aren’t really truths. It’s edgy different and I can understand that it provides this critical unique appeal to people bored of regular cinema. But at times in my opinion this is overdone and at times even with cringe. It’s something to watch for a unique piece of cinema and one thing I can vouch for that this is truly original and authentic in every single way. Nevertheless, originality does not always mean a good work of art. Dogtooth is definitely not for the faint hearted but if you’re bored of regular cinema this might be one to watch.

My name is Yahia El-Tanani and I’m a 20-year-old Biomedical Sciences student at Newcastle University, England. I’m an avid artist and gym-goer. But I really enjoy the small things in life like firm handshakes, good food and hard work, and I hate (and I mean I hate) roses. More importantly than all of that is that I bleed film. Film is my passion, and I’m driven to become a positive influence and voice in the film industry. I’m exactly what it says on the tin. But enough small talk, go follow me on social media and don’t be afraid to have a chat. Why not be two complete strangers discussing our love for film?

Ps. Email is the quickest way to reach me J.

Plot: Joy is the story of the title character, who rose to become founder and matriarch of a powerful family business dynasty.

Verdict: Interesting Story But Not Enough

Story: Joy starts with her grandmother Mimi (Ladd) introducing us to the family, her daughter Terry (Madsen) who is obsessed with soap operas, while Joy (Lawrence) always the extra creative still ends up with an air hostess job. Joy still lives with the rest of her family including her ex-husband Tony (Ramirez) as her estranged father Rudy (De Niro) needs to move back in.

Joy tired of just getting by she wants to bring back her ideas from her childhood and start making an invention that could stop her family from ever having to worry again. Joy starts by trying to build a new design for a mop with the support of all her family but can she make an impact in the industry.

Joy is a good story that shows how important it is to not give up while chasing a dream, I do like where this shows how determined Joy was but I would’ve liked to have seen more from after the events in the film showing more than we got. Making a movie about selling mops isn’t ever going to be easy and this falls to really pull us in enough to make us interested in what is happening.

Jennifer Lawrence: Joy was always a creative person but life just seemed to hold until final she decides to take the risk a try and make something that could change the world, she creates a mop and along with her father she tries to sale this into the world where she goes to make a future for her family. Jennifer is great in this role as the strong woman.

Robert De Niro: Rudy is Joy’s father and a business man himself, when she wants to go into business he stands with her to try and make this happen. He isn’t sure with every decision but doesn’t want to let his daughter down. Robert is on this film but doesn’t get too much screen time to really shine.

Bradley Cooper: Neil Walker is the sales manager at QVC who takes a chance on Joy’s idea by putting in on his network, he respects her aggressive approach and lets her be the one to sale the product. Bradley is only in a supporting role but doesn’t get enough screen time to have enough important impact.

Edgar Ramirez: Tony is the ex-husband of Joy but the two are still close friends, he lives in the basement and helps with the business and is the one who introduces her to Neil. Edgar is good but I would have liked to have seen more from him as he looked interesting.

Support Cast: Joy has a good supporting cast but I feel we could have seen more from all of them.

Director Review: David O Russell – David doesn’t give us enough for what we know he is capable from behind the camera.

Comedy: Joy is classed as a comedy?

Settings: Joy uses the settings to make us feel like we are in the same time period.
Suggestion: Joy is a film to try as we get to learn about the woman herself Joy. (Try It)

Worst Part: Would have liked to have seen more.

Believability: Based on the real lady.

Oscar Chances: Lawrence could get a nod but that is it.

Overall: Selling a mop movie, well this isn’t going to be that bad but not interesting enough