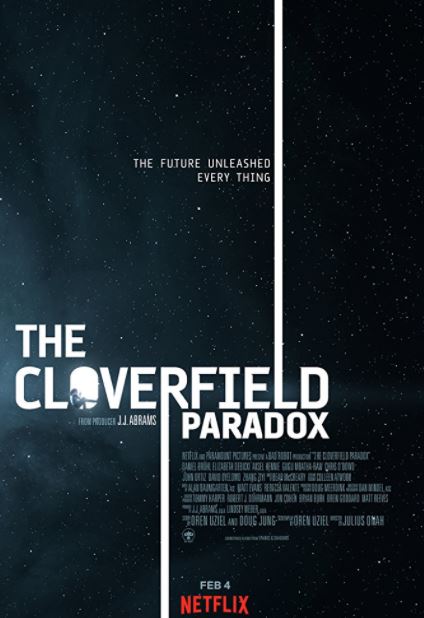 Plot: Orbiting a planet on the brink of war, scientists test a device to solve an energy crisis, and end up face-to-face with a dark alternate reality.

Story: The Cloverfield Paradox starts as we come to the Earth as the people are facing an energy crisis, one of the last hopes is an experiment in space to product an almost infinite amount, the crew includes Schmidt (Bruhl), Hamilton (Mbatha-Raw), Kiel (Oyelowo), Monk (Ortiz), Mundy (O’Dowd), Volkov (Hennie) ad Tam (Zhang).

While performing their experiment something goes wrong and the crew finds their ship in the middle of nowhere in space, the Earth gone, what happened, the team must work together to keep the ship active before even considering looking for home and things only get more confusing when Jensen (Debicki) appears on the ship claiming to be part of the team.

Thoughts on The Cloverfield Paradox

Characters – Hamilton seems to be one of our main characters, because we follow her on Earth as she debates whether to be part of the mission, so she can save her family from the crisis on Earth, on board the ship we see how her first and most important thing to follow is communicating with her family. Kiel is the Commander on this mission, he knows how each member of the team can be used to get through the problems. Schmidt is the man behind the science, it has been his ideas which are being put into practice in the experiment. Monk is the medical officer on the ship, he faces the scientific decisions. Mundy is the engineer on board, he can fix any problem as fast becomes the funniest member of the crew. Volkov is the member of the team which easily gets hot headed through the situations the crew themselves in. Tam is a crucial part of the team when it comes to knowing the operations behind the experiment. Jensen appears on the ship after the experiment goes wrong, she seems to be part of the team, but no one else knows who she is. She knows the operations the crew want to follow too.

Performances – This has a star studded multi-cultured set of actors, this helps show us how the world is united with this plan. Gugu Mbatha-Raw is good in this leading role, her character is the only one that does seem to show any life outside of the mission though. Daniel Bruhl and David Oyelowo are two top performers and they both give us the good performances we expect. Chris O’Dowd nearly steals the movie, his characters wit mixed with his delivery helps the movie have moments of light-hearted humour. Elizabeth Debicki is good too but I do feel like we don’t get enough from the talents of Aksel Hennie and Ziyi Zhang.

Story – The story follows an experiment to try and solve the problems the Earth is facing with energy supplies, the idea takes us into a scientific discussion about what would happen if scientists accidently ended up in an alternative dimension. We have characters that are smart in space, which follows the same lines as ‘Life’ and ‘Sunshine’ as they do come together to try to solve the problem over just panicking. This does tie into the previous films nicely too, which is just what we wanted to see.

Horror/Mystery/Sci-fi – This film doesn’t reach the horror element level it could have, but the mystery side of the film covers this weakness, the sci-fi side of things do offer big questions about where things could be going.

Settings – The film uses two major settings, the first and best is the space station which is highlight of the film because every time we jump to Earth, it seems to slow up the pace of the film.

Special Effects – The effects are flawless through the film, the space moments are wonderful and an incident with an arm is great.

Scene of the Movie – Found the worms

That Moment That Annoyed Me – Returning to Earth gets frustrating.

Final Thoughts – This is a smart sci-fi film that throws up the questions about what could go wrong with an experiment that could help save the Earth. This does fit into the universe created with the Cloverfield movies too.