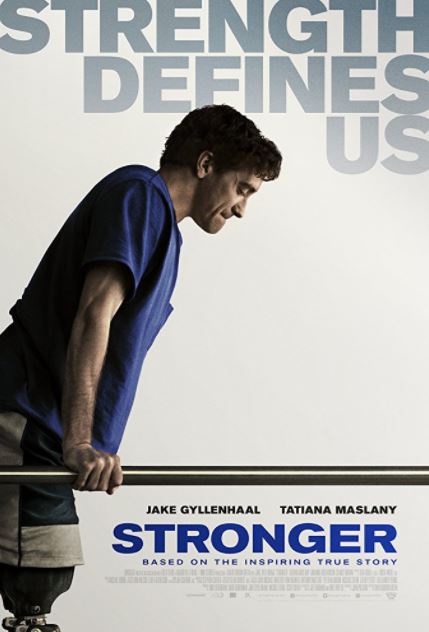 Plot: Stronger is the inspiring real life story of Jeff Bauman, an ordinary man who captured the hearts of his city and the world to become a symbol of hope after surviving the 2013 Boston Marathon bombing.

Story: Stronger starts as we meet Jeff Bauman (Gyllenhaal) a likeable supermarket worker that is a regular in his local Boston bar, while trying to rebuild his relationship with Erin (Maslany) who is running the Boston marathon. Jeff plans to be on the finish line to supporting Erin, this is where his life changed forever, when he is one of the victim in the bombings.

With his parents Patty (Richardson) and Big Jeff (Brown) by his side, we learn that Jeff has had both his legs amputated from above the knees. With the full support of his family, Erin, his employers and the city of Boston, Jeff starts his recovery, rehibition and learning that his life is never going to be the same again.

Characters – The characters in this movie are real people, you can’t make up their stories, their feelings and emotions about what has happened to them. Jeff Bauman is the average young man, working a normal job, living a normal life. His life is changed forever when he becomes one of the victims of the Boston marathon, losing both his legs. He must learn to accept his new reality of life, while dealing with the pressure of becoming the face for strength in the aftermath of the Boston marathon bombings. Erin Hurley is the on again off again girlfriend of Jeff’s it is for her that he attends the marathon, she gives everything to stick by him during his recovery, gives up her job to care for him, but she struggles to cope with extra demand on hr life. Patty is Jeff’s mother who brings the family together to support him, she does also struggle to see her son the way he is now.

Performances – Jake Gyllenhaal is fantastic in this movie, he once again shows everybody that he is the real deal, he can accept any change needed to make himself the character while showing the emotional distress his character goes through. Tatiana Maslany is brilliant in her role too, she shows the difficulty that her character must go through with each action and speech she goes through. Miranda Richardson is great as the devastated mother who must remain strong after what has happened.

Story – The story continues on the events of the Boston Marathon after last years Patriots Day. This time we just follow one man’s recovery and how it effects the people in his life. This story plays on the emotional level that which you feel as Jeff’s road to recovery unfolds. It shows how one moment in life can change everything in life and the people you are sharing that life with.

Biopic – Jeff Bauman was an average person, his friends loved and respected, his life changed making him a celebrity for the city, which is where the pressure is shown for him.

Settings – The film is set in and around Boston which is where the event happened and it shows the life the people had before it happened.

That Moment That Annoyed Me – It was difficult to find one.

Final Thoughts – This is a powerful drama showing the strength the city showed in support for Jeff through the tragic event that changed his life, we see how he did overcome the event to become stronger.

Overall: This is a power drama that shows how to find strength in the darkest moments. 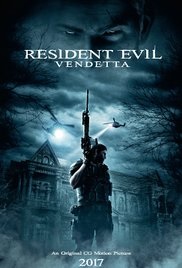 Why I’ve Picked this choice – For V I picked Vendetta, this is the third instalment in the animated versions of the Resident Evil films which I am a fan of all three, this one gets bigger once more which is fine because we need a more dangerous enemy for our heroes to take on and we have more of the favourites from the video game series being portrayed more accurately that the live-action versions of the film. if you were a fan of the games this one could be for you to enjoy.

January is here and that means award season and for the whole of January I will be looking at a range of best and worst subjects, before going into what I think are the true best nominations.

Reason – Diana has never enter the world of man until she joins Steve Trevor on this mission during World War I, she must learn quick as she sees the suffering the innocent victims of war are going through, she decides enough is enough taking down the enemy by risking her own life to save the innocent from the horrors that will happen to them.