Plot: The old gang comes together during the holidays after a mystery assailant targets one of their own.

Story: Psych the Movie starts as we see how Shawn (Roday) is now trying to do the detective business in San Francisco where Gus (Hill) has gone to his full-time job. Juliet (Lawson) has a new partner while trying to stop chief Vick’s (Nelson) daughter from falling onto the wrong side of the law.

When Juliet’s partner is attack and left for dead, with Shawn banished from the case by Juliet, this could be Shawn’s first big case in San Francisco. It isn’t long till Shawn finds himself investigating the case which involved Thin White Duke (Levi). When the Duke targets Juliet, she doesn’t want Shawn to be involved in the case, which only leads to the guys bringing back the rest of the gang to solve the case.

Thoughts on Psych the Movie

Characters – Shawn doesn’t seem to have settled in the new city, he wants to continue with his investigation business even though Gus is busy working to keep the business a float. He still is the slacker that uses his skills of observation to keep himself busy. Gus is the best friend of Shawn who followed him to San Francisco and started a new job to help fund the investigation agency, he still enjoys his food always finding himself eating the most random dish he can get his hands on. Juliet is back in her position of detective, but this time she becomes the target after her partner is killed, she doesn’t want her friends getting involved, wanting to clean up her own mess. Thin White Duke is the man behind the targeting of Juliet, he works well his crew, but is working for someone from their past. We have plenty of appearances from fan favourites from the series.

Performances – James Roday was always fantastic in this role, it is like he never left the role that can play for years. Dule Hill gets plenty of laughs with a role he never felt like he left too. The whole of the original cast gets to have fun with, sadly due to health issues we only got a cameo from Timothy Omundson. Zachary Levi does make for a good villain for the film, getting the best dialogue against the regular characters. 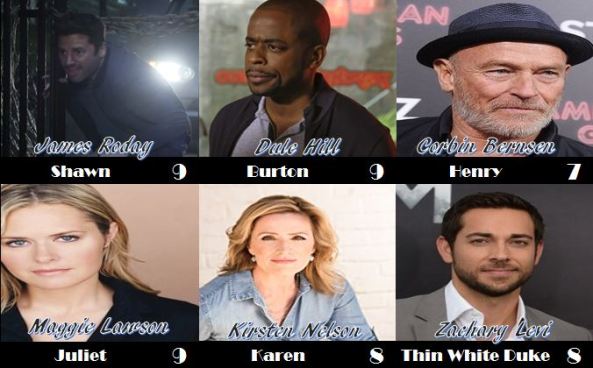 Story – The story brings back our favourite characters from the show, we see how they have got used to their new environment where the TV show finished off. We get a case to solve where we see Shawn and Gus get themselves into more trouble, but it is Juliet needing to figure out who is trying to ruin her career that takes centre stage. If you were a fan of the show, then you will enjoy this story.

Comedy/Crime/Mystery – The comedy comes from the problems Shawn and Gus get themselves in because they have fantastic chemistry, we also dive into the light-hearted crime story, that brings in the mystery to who is behind the whole crime.

Settings – The film being set in San Francisco brings our characters to a new location for a crime story for the first time, as the show ended with them moving there. It works because we see the struggles to get used to this environment.

That Moment That Annoyed Me – We would have like more of Carlton, but it was for medical reasons we didn’t, so can’t complain.

Final Thoughts – This is a TV movie that will make any fan of the show happy, it keeps the humour flowing and brings back plenty of our favourite characters.

Overall: Fans will be left with a smile on their faces.

2017 was one of my favourite years for movies in years, so through the month of December I am going to look at 31 movies that I am looking forward to in the year of 2018, they are not in any order just 31 I want to discuss.

Plot – Five young mutants, just discovering their abilities while held in a secret facility against their will, fight to escape their past sins and save themselves.

Will I Enjoy It? – I have been on board since the first X-Men movies, I enjoy watching them all even the less popular. So if this one is going to be darker, I am all in now.

Will it be successful? The cast should bring the audience in, but this could be one that the audience skips with the bigger franchise around at the same time.