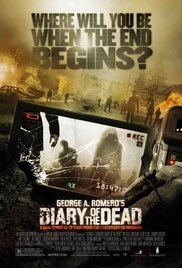 Plot: A group of young film students run into real-life zombies while filming a horror movie of their own.

Story: Diary of the Dead starts by taking us away from the original universe to the very start of the outbreak in the modern era of technology as we watch Jason Creed (Close) who makes a film about what happened with the original outbreak.

Jason has an idea to film the events of the outbreak with his fellow film makers, his girlfriend Debra (Morgan), Tony (Roberts) Tracy (Lalonde), Mary (Maslany) to mention a few. We watch their travel across country to find out how safe their families are.

Diary of the Dead takes out of the world we have come to know but it does take us to a world where the madness of the human curiosity into death has taken over the world as people want to see the outbreak happening on the internet. This continues to show Romero has the ability to evolve into the modern horror trends bring his own stamp to the found footage style film and once again bringing the new kills to the zombies with some of the most original of the time. On the negative we have to look at the poor character decisions in a world where they are actually making a horror movie the characters do seem to have no idea how to make rational decisions in a horror situation.

Overall: Wonderfully shot but poor character decisions loses a lot of the tension which should be created in the film.